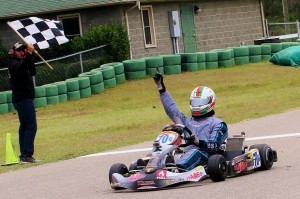 The weekend of April 4/6 2014, saw Connecticut teen racer Tazio Torregiani take his first National win of the year, in the second round of the WKA Manufacturer Cup National sprint kart series, on the fast Carolina Motorsports Park, in Kershaw SC (USA). Tazio scored two class podiums including a third place on Saturday.

The FairfieldCounty up and coming race driver is eager to climb the racing latter, and with the right support, partner, and opportunity, he knows he can do it!

The Stamford High freshman was entered to race in the very popular and ultra-competitive Parilla Junior class, with some of the best racers in North America. His Woltjer/Iame powered Haase kart was prepared by Chris Rock, and the Mike Doty Racing team.

The 2012/13 USA CIK FIA Academy Trophy driver didn’t seem to have lost his edge, even after being out of a kart for three months since Daytona. On Sunday Tazio qualified third, and won the pre-final race. He started the feature race on pole. “I was fast all weekend from the get go, and finishing 3rd on Saturday made me even more determined to win on Sunday. After battling for the lead for around 3 laps, and dropping a tire that almost took me out of the race, I knew that I needed to focus, get in the lead and make no mistakes, and I did just that! It was a great win and I’d like thank Chris Rock, Mike Doty, and Danny Woltjer for giving me a fast kart. I’d like to dedicate this win to all the safe teen drivers out there on the road, that help save lives”, commented Tazio after the race. Torregiani also secured fastest lap of the race weekend.

Last February, Torregiani also graduated from the SkipBarberFormulaRacingSchool, in Sebring, FL, with a very impressive showing, in his very first drive in a race car.

He was also recently honored in his hometown, by the Stamford Board of Ed and the Mayor, for his racing achievements.

Tazio Racing is brought to you by www.PorscheofGreenwich.com, official website of New Country Porsche of Greenwich.