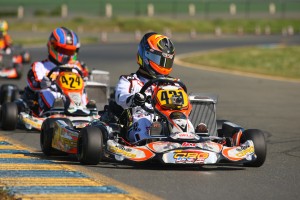 Versatility…it’s a quality sought after in many racing drivers. It means being able to adapt to different styles of racing and still be competitive in what ever you are driving. Rising motorsport talent Sabré Cook proved this winter that she is as versatile as they come in kart racing. Cook ventured out west to contest this year’s Rotax Challenge of the Americas, the premiere winter karting series on the west coast. Cook put forth a tenacious effort at each of the six rounds on the Challenge, highlighted by wins at rounds four and six to close out the series as the vice-champion a very competitive DD2 field.

Cook began the 2014 Challenge series in Tucson, Arizona. Plenty of track time from previous kart races at the Musselman Honda Circuit set Cook up well for the opening weekend of this year’s championship chase. The competition was very tight on the first day of racing. Sabre qualified her CRG-USA entry sixth on the DD2 grid despite being just over two tenths of a second off pole. Sabre improved in the Prefinal and took over the lead, and drove to the win as the race ended. Unfortunately for Cook, her win would be stripped from her and she would record a DNF after losing her sidepod coming to the white flag. Sabré quickly was back at the front, taking over the lead by lap nine after starting from the back of the grid for the main event. The rest of the feature race was a terrific battle that saw Sabre fight for the victory before settling into second at the checkered. Sunday was another day fighting at the front of the field. Qualifying third, she fought for the Prefinal win, only to end up third in the order. Bad luck struck as an electrical issue struck her DD2 powerplant, stalling the engine and taking her out of contention for the victory.

The second weekend of the series took Cook and her CRG-USA teammates back to the warm state of Arizona, and the Phoenix Kart Racing Association in Glendale. Cook outran her bad luck that plagued her in Tucson, as she closed the gap on the leaders Saturday, and scored her first series victory Sunday. Qualifying was close as always in the DD2 class, which featured Sabré placing her CRG second on the grid, missing the pole by a mere 42 thousandths of a second Saturday morning. After running second the entire Prefinal, Sabré made her move to take the lead over early in the main event. In the closing laps, Cook was slotted back to the runner-up position, where she finished for the second time in three races. Sabré looked very solid in the Sunday Prefinal after qualifying P2 to start Round Four. She tamed her DD2 competition as she scored the race win and the pole position for the main event. Sunday’s feature race was more intense pack racing, involved in a three-kart battle nearly the entire race. With one lap remaining, Sabré escaped the battle to pull out to a solid lead and score her first ever victory at the Challenge. Cook dedicated the win to her uncle Randy Cook, who was tragically passed away this past New Years Day.

The final weekend of the Challenge took Cook and company to the west coast and the technically challenging, and aesthetically pleasing SimracewayPerformanceKartingCenter in the hills of Sonoma, California. Sabré made her final push toward the DD2 championship, and a ticket to the 2014 Rotax Grand Finals. Cook was once again among the leaders throughout the first day of competition. Qualifying second, Sabré turned that into a Prefinal win and was leading the early portion of the Final. Cook’s bad luck returned to bite her in the main event as once again power was lost in her DD2 engine. The DNF took away the chances for a run at the title on Championship Sunday, but redemption was on the mind for Sabré entering the final round. A third place qualifying effort led Cook to a second place finish in the Prefinal, setting her up well for the final main event of the year. The race featured a four-kart race for the DD2 final victory of the season. Cook went back and forth, trading blows and the lead over the first 21 laps. She sealed the deal on lap 22, taking the lead over the final time and running away to her second victory of the series.

Cook ended an incredible 2014 winter season at the Challenge that saw her score two victories, along with two runner-up finishes across six races. Despite a truly impressive three month long effort, Cook missed out on the DD2 championship by mere points.

Sabré will now join the CRG-USA team as they head south to the Lone Star State of Texas to prepare for the upcoming Superkarts! USA season. Cook will kick off her sophomore season in the S1 Pro Stock Moto category on the SKUSA Pro Tour the first weekend of May at the fifth annual SKUSA SpringNationals at the Dallas Karting Complex in Caddo Mills, Texas. Sabré will prepare for the national event with a weekend of racing at the DKC facility, contesting the opening two rounds of the Texas ProKart Challenge on April 26-27, which will serve as a ‘tune-up’ race for the SpringNats.