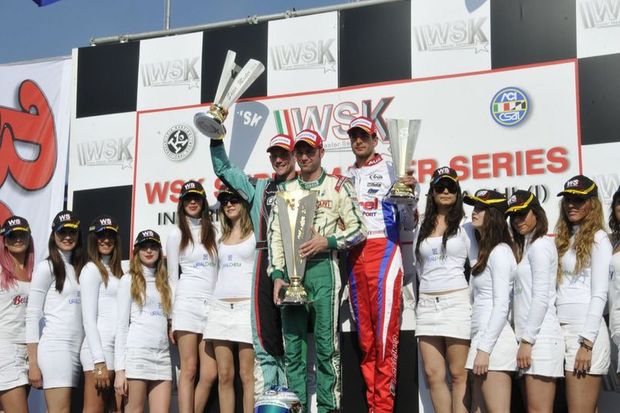 The new WSK standings after the race of Castelletto. New winners and, consequently, new standings for the WSK Super Master Series after the second round of the Series in Castelletto di Branduzzo (Italy). The event was thrilling and uncertain until the end, with many protagonists who can now be regarded as top driver of international kart racing. The second round of the WSK series on the 7 Laghi Circuit was the ideal showcase for many talented drivers coming from all around the world. The next appointment in two weeks, when WSK karting will go back to Puglia on the International circuit La Conca for the third and decisive round of the Series.

Ardigo’ back at the top of KZ2. The two favorite drivers for the KZ2 victory were, initially, the Italian Marco Ardigò (Tony Kart-Vortex-Bridgestone) and the French Arnaud Kozlinski (Intrepid-TM-Bridgestone): they achieved the same results in the qualifying heats and, then, they won their Prefinals. So, they filled the first two slots on the starting grid of the Final. At the start, Ardigò was fast and gained the lead. Behind him the Dutch Bas Lammers (FK-Parilla-Bridgestone) managed to gain the second position even though he never got close to the leader. Their race conduct was perfect, but Ardigò always kept Lammers at bay. Behind them, the last podium position available was scored by Paolo De Conto (Birel-TM-Bridgestone); he had started from the fourth row, but after closing the gap with Kozlinski, he managed to pass the French driver closing in third position. Thanks to this well deserved victory, Ardigò passes Lammers also in the current standing of the Series, just before the final and decisive round of Muro Leccese.. 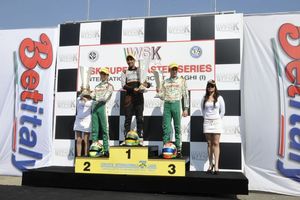 Daruvala matchless in KF. The British Lando Norris (FA Kart-Vortex-Dunlop) and the Italian Alessio Lorandi (Tony Kart-TM-Dunlop) were the favourites after the victories in their Prefinals but their race was slowed down when they got involved in the tussle at the start of the Final, whereas the Indian Jehan Daruvala (FA Kart-Vortex-Dunlop) had an excellent start. His good performance in the heats and in the Prefinal was confirmed by his great race conduct: he gained an early lead and pulled away from the rest of the pack. The French Gabriel Aubry (Tony Kart-Vortex-Dunlop), despite a streak of fast laps, did not manage to close the gap with the Indian driver and finished second. The Polish Karol Basz (Tony Kart-Vortex-Dunlop) was too far from the first two drivers and kept his pace ready to attack in case one of the two leaders had made a mistake, but neither Daruvala nor Aubry made any mistake. Basz closed in third position, a result which allows him to keep the leadership of the current standing thanks to his victory in the first round of Sarno. 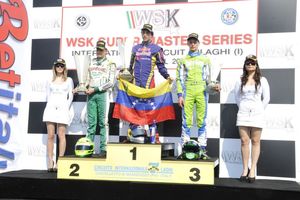 Baiz wins in KFJ. Mauricio Baiz (Exprit-Vortex-Vega) has been among the top drivers since the very beginning. He grabbed the pole in qualifying and drove below his potential  in the heats. But in the Prefinal, in the crucial moment of the race, he started to drive as fast as he could: the driver from Venezuela immediately gained the lead of the race, gaining ground over his opponents who were not able to close the gap. After his victory in Castelletto, Baiz has hauled himself up to the top position of the current standing of the KFJ category. Also the German Mick Junior (Tony Kart-Vortex-Vega) put in a similar performance: he kept at bay his pursuers, gaining ground lap after lap and closing in second position. Behind him, the duel for the third place between the two Italian Leonardo Lorandi (Tony Kart-TM-Vega) and Davide Lombardo (Exprit-Vortex-Vega) slowed down the two drivers who finished third and fourth respectively.

Gafar wins on the last lap in 60 Mini. In the world of motor racing we say that a race is won after you’ve crossed the finishing line. That’s exactly what happened to Muizz Gafar (Hero-LKE-Vega), who took advantage of a contact between Nicola Abrusci, the leader of the race at that moment, and his pursuer in second place, Antonio Serravalle (both Tony Kart-LKE-Vega). So, Gafar managed to overtake the two duellers and to win the race ahead of Makar Mizevych (Tony Kart-LKE-Vega) and Christian Corbellini (Top Kart-Parilla-Vega). Abrusci and Serravalle, who had won the Prefinals and had dominated the first part of the Final, had to be content with the fourth and fifth place respectively. Mizevych, today’s runner-up, is the new leader of the current standing.

WSK on TV. The delayed broadcast of the Finals will be aired by Rai Sport 2 on Thursday 17th April at 06.00pm. The following day, always on the same channel, the special report of the weekend from the 7 Laghi Circuit.