Ardigo and Kozlinski lead the way in KZ2 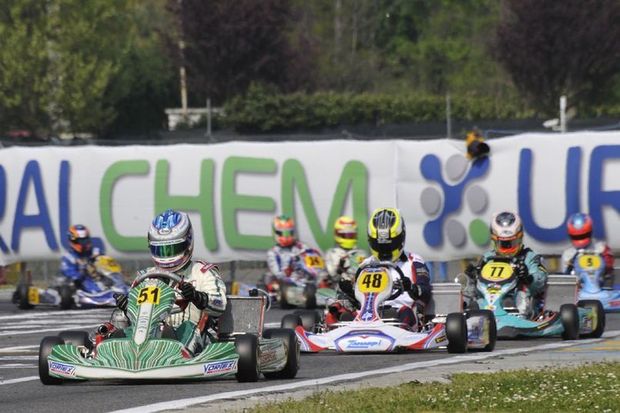 Drivers are getting ready for the WSK in Castelletto. Weather forecasts were right and today’s climate was definitely spring-like. The International Circuit 7 Laghi in Castelletto di Branduzzo (Italy), which will enjoy the same weather condition tomorrow too, hosted a fantastic kart racing show. Drivers and teams did their best in the qualifying heats: after tomorrow’s Finals, which are going to be as thrilling as today’s races, the standings of this edition of the WSK Super Master Series might radically change. 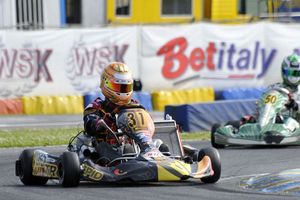 Arnaud Kozlinski is the polesitter for Prefinal A
(Photo: press.net images)

Kozlinski and Ardigo’ polemen in KZ2. Thanks to his two victories in the heats, the French Arnaud Kozlinski (Intrepid-TM-Bridgestone) is the pole-sitter of the Prefinal A. Here, he will find  by his side the Belgian Rick Dreezen (Zanardi-Parilla-Bridgestone), who won once. Second row for the Belgian Jonathan Thonon (Praga-Parilla-Bridgestone) and the Czech Jan Midrla (Birel-TM-Bridgestone). In the Prefinal B, the pole went to the Italian Marco Ardigò (Tony Kart-Vortex-Bridgestone), who won twice too. Next to him, in the front row, his teammate, the Italian from Rome Flavio Camponeschi. Behind them, the Czech Patrik Hajek (Praga-Parilla) and the Dutch Bas Lammers (FK-Parilla). The latter missed victory in one of the heats because of a 5-second penalty for a contact with Ardigò. The other heat was won by the Italian Paolo De Conto. Despite his victory, the Italian driver will start from the fourth row of the Prefinal B because he got slowed down by a retirement.. 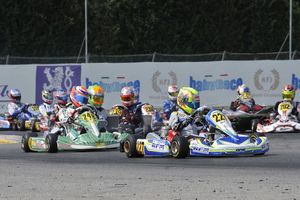 Lando Norris posted the fastest time in KF qualifying and won all his heat races on the day
(Photo: Press.net images)

The KFJ is still very uncertain. The two heats on schedule tomorrow morning will be crucial for the pole positions of the two Prefinals. In fact, the eight heats run today were too uncertain and none of the drivers emerged as the favorite for the final victory. There were too many protagonists, which made any attempt of prediction useless. There were five different winners in the heats: the Italian Leonardo Lorandi (Tony Kart-TM-Vega), the German David Beckmann (Tony Kart-Vortex-Vega) and the Venezuelan Mauricio Baiz (Exprit-Vortex-Vega), the pole-sitter after qualifying, won two heats each. The Russian Alexander Vartanyan (Tony Kart-Vortex-Vega) and the American Logan Sargeant (FA Kart-Vortex-Vega) won a heat each.

Serravalle and Gafar at the top in 60 Mini. Tight schedule for the young drivers of the 60 Mini. They took part in the qualifying session and , then, in five of the six heats to be raced in the category. The fastest time was set by the Malaysian Muizz Gafar (Hero-LKE-Vega), who then won two heats. Also the Canadian Antonio Serravalle (Tony Kart-LKE-Vega) won twice, while the Italian Nicola Abrusci (Tony Kart-LKE-Vega) won once. Tomorrow morning the last heat and, then, we will know the names of the pole-sitters of the two Prefinals.

WSK live on the web and on TV with a delayed broadcast. Cameras are ready to cover the event: images of the Prefinals and of the Finals will be available tomorrow live on the web on wsk.it. The delayed broadcast of the Finals will be aired by Rai Sport 2 on Thursday 17th April at 06.00pm. The following day, always on the same channel, the special report of the weekend from the 7 Laghi Circuit.