Brueckner Closes Out Rotax Challenge of the Americas Program 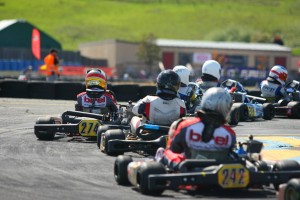 Nicholas Brueckner emerged as the quickest driver in the main event Sunday, piloting his #274 Birel at the Rotax Challenge of the Americas finale (Photo: SeanBuur.com)

The 2014 Rotax Challenge of the Americas did not pan out as hoped for rising karting star Nicholas Brueckner. The MRP Motorsport/Birel America driver entered the series for the first time, making his Junior Max debut. A former Micro Max and Mini Max champion, Brueckner came away from the three events with more knowledge to move forward on the season with major events on the schedule for 2014. The Texan showed speed at the series finale, held at the SimracewayPerformanceKartingCenter in Sonoma, California, visiting the facility for the first time.

“It was not the results I hoped for in my first year at the Challenge,” commented Nicholas Brueckner after the finale weekend. “I had speed at each of the three events, I just didn’t have luck on my side. It’s upsetting, but makes me excited to start out the next series with better finishes.”

Friday’s official practice session was hampered with rainy weather, so only a few sessions at the end of the day were salvageable toward the weekend’s program. In the limited number of laps Nicholas recorded, he quickly adapted to the challenging 7/10-mile course. A damp track Saturday morning presented with the drivers with another challenge, negotiating the course on slick Mojo tires. Brueckner was among the top drivers in the morning warm-up, but slipped to the 11th position in the timed qualifying session. A rough opening lap shuffled the Texas driver back to the 23rd spot, but the determined pilot advanced back up to the 14th position. Contact in turn one at the start of the main event once again put Brueckner out of contention. Falling down to 27th, Nicholas fought forward with a damaged kart to finish 17th, running lap times only a few tenths off the leaders.

“The kart was bent in the steering sections, but I kept pushing every lap,” continued Brueckner. “I was never going to give up, and I almost got back into the top-15.”

Sunday’s Round Six action began with Nicholas a bit slower than the previous day’s qualifying session. He recorded the 13th quickest lap of the timed session, once again putting him in the middle of the 34-driver field. At the start of the Prefinal, Brueckner was heading into the first corner when another competitor spun in front of him. With no room to move, contact was made and it resulted in a DNF for Nick, putting him at the tail of the field for the main event. The 25-lap feature was primed for Brueckner to make good of earning his best result of the season. An amazing start saw him clear nearly half the field as he was into the 16th position the first time pass the stripe. He continued moving forward, posting the fast laps of the race as he reached the top-10. On lap 15, a spun kart pulled out in front of Nick on the exit of turn six. Contact was made and his chain fell off the drive system. Unable to return the chain onto the engine, Brueckner recorded another DNF.

“I was really upset about the driver coming out in front of me,” added Nick. “The Birel kart was fast, and I know I could have caught much of the top-10 drivers ahead of me with 10 laps left.”

Brueckner will now turn his focus on a busy summer season planed ahead. Nicholas will compete in both the Texas ProKart Challenge and the Rocky Mountain ProKart Challenge. He will also contest the Superkarts! USA Pro Tour, Rotax Summer Shootout, the US Rotax Grand Nationals, and the Rotax Pan American Challenge. Up first is a double-weekend at the Dallas Karting Complex for the opening round of the Texas PKC program on April 25-27, with the SKUSA SpringNationals to follow.