Championships are not given away; racers must go out and earn them. Rolison Performance Group strives to help drivers reach their potential and personal goals, including race wins and championships. Mike Rolison and his team helped to make history at the final stop of the 2014 Rotax Challenge of the Americas at the SimracewayPerformanceKartingCenter in Sonoma, California. For the second straight year, Rolison Performance Group garnered the Senior Max and Junior Max championships, thanks to the drive and determination of Phillip Arscott, Austin Versteeg, and the entire RPG family. Both Arscott and Versteeg needed a win in the final round of competition for a chance at the titles, and the entire RPG group pulled together in an effort to put them on top of the podium Sunday afternoon.

“Wow! It’s hard to believe that we won the Senior and Junior championship again,” commented Mike Rolison after the weekend. “The competition in both categories continues to grow, so to be able to contend for the title is a feat in its self. Phillip did what he needed to do after tough circumstances on Saturday, but he came through. Austin had a slight mistake that cost him points Saturday, and that stuck with him throughout Sunday to help him drive to a win. This is what we work for, staying at the track late and putting in the extra time before the event pays off. I can’t be any happier for the entire RPG family, as we prepare to send at least two of our drivers to the Rotax Grand Finals.” 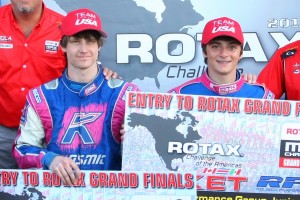 The final weekend was the best overall performance for the Senior Max drivers under the RPG tent. Eyes were on Arscott, entering the weekend as the championship leader. He began the weekend qualifying near the front of the field in the fourth position for Round Five on Saturday, turning it into a second place result in the Prefinal. The Final was up and down for the veteran, as he fought his way to contend for the lead on three different occasions, only to be pushed off-course in the final corner. He crossed the line in the third position, and elected to have his engine fully inspected to avoid any issues that may arise Sunday afternoon. Officials discovered the balance gears were not aligned, and thus he was removed from the results. Every point mattered heading into Round Six, with victory the only chance at the title. Phil missed the pole position and five bonus points by one-tenth of a second behind his two RPG teammates. Driving another smooth and calculated race, Arscott picked up a solid second place finish in the Prefinal, which led to better things in the Final. By lap six of the main event, Arscott had taken over the lead from RPG teammate Selliken. Arscott never relinquished the lead and drove a two-second victory for his third of the year. The point calculations went in the favor of Phillip, as he scored the championship by just two points. The second straight title will send him to the 2014 Rotax Grand Finals, where he will compete as part of Team USA.

Versteeg carried the RPG flag in the championship hunt in Junior Max, coming in with two victories and a shot at the crown. Saturday was a near sweep for Austin, as he put his Kosmic on the pole position in qualifying before driving to the Prefinal win. Versteeg led the opening 10 laps of the Final with RPG teammate Kyle Wick close behind in second. A slight mistake midway through the race cost Austin a handful of positions, but the determined young driver fought his way back to the fourth position and recorded the fast lap of the race for five bonus points. Versteeg added five more with his third fast qualifier honors in the timed session on Sunday, helping his chance at the title. The Prefinal saw Austin go the wrong direction, dropping back to the fifth position. Knowing a win was the only chance at the title the RPG pilot stood up to the challenge and went for it. Into the lead by lap seven, he traded the top spot for a few laps until reclaiming the position with 12 laps to go. The Utah driver never put a wheel wrong, holding on to his third victory of the season to secure his first Challenge championship and ticket to the Rotax Grand Finals. 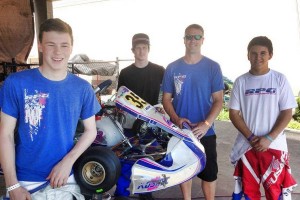 Senior rookies Luke Selliken, Blaine Rocha and McKay Snow each had a career first for their young season at the top level in the sport. Selliken earned his first Senior podium during Round Five action. Getting his RPG Kosmic faster with each session after tough qualifying result, Luke was classified third in the main event Saturday. He added to his young resume by posting the fast lap in qualifying Sunday for his first pole position, following it up with his first Prefinal win. It was another personal best in the main event, placing runner-up to Arscott for his best finish of the season.  2013 Junior Max champion Rocha was solid in qualifying, sitting in the top-three both days for his best efforts in the series during the timed sessions. He was the third RPG driver of a 1-2-3 result in the timed session on Sunday. Rocha drove to a fourth place finish on Saturday, matching his previous best result. Sunday’s main event was a 25-lap battle, with Rocha earning the fast lap of the race and finished eighth after running inside the top-five. Snow improved with each and every session, showing he has the talent to contend for podium finishes this season. After finishing Saturday’s main event in seventh, he drove to an impressive fifth place during the final round. Hailey Groff made her first series start of the year, recording her best finishes at the Challenge in the last two years. Saturday was an 11th place result, improving her race pace on Sunday with another solid 11th in the final round main event.

Kyle Wick had a banner weekend in Junior Max as he finished the season third in the championship standings. Wick was among the podium contenders all weekend. He qualified second for Round Five, and ran third in the Prefinal. Wick ended Saturday’s action with a trip to the podium celebrations thanks to a quality second place finish, his best result of the season. Wick returned in contention the following day until he was shuffled back outside the top-10, but fought back to finish ninth. Canadian Jeff Fulham was among the hard chargers in Saturday, recovering from a tough qualifying effort. In total, he gained 12 positions over the course of the day to finish the main event in fifth place. Fulham climbed from outside the top-10 once again on Sunday, jumping up to 10th by the end of the Final. Utah driver Bruno Carniero recorded a couple 22nd place results in his Challenge debut on the year, while Dhyllan Skiba finished his Challenge campaign, gaining valuable experience for the future, placing 29th on Saturday and 27th on Sunday. 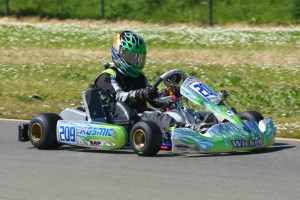 Josh Pierson and Tait Blum each had their best performances of the Challenge in the Micro Max class category. Pierson had a great day on Saturday, scoring his first ever pole position by nearly two tenths of a second, and led every lap of the Prefinal for his first series win. Pierson led 10 of the 14 laps in the main event, losing out on a drag race to the checkered flag. The runner-up finish was his best of the series. Pierson ran inside the top-10 all day in Round Six after qualifying his team RPG entry in the fourth position. A spin during the main event cost him a chance at the podium finish, but he fought strong until the end to place ninth. Blum was among the contenders on Saturday, crossing the finish line in third only to be removed from the results for a throttle issue. He bounced back with a very strong fifth place finish on Sunday to finish the series with his best result.

RPG drivers Justin Peck and Chad Wallace contested the Masters Max class this past weekend. After running top-10 all Saturday, Wallace brought home a 10th place finish in Round Five, followed by a 12th place result. Utah’s Justin Peck ended his 2014 Challenge season with a ninth place finish on Saturday before finding some speed hidden inside of his Tony Kart chassis to end the season with a fifth place result. Connor Wick showed tons of speed in the Mini Max class under the RPG tent, but bad luck ended his hope at big results in the main events. After winning Saturday’s Prefinal, Wick retired after the first lap with a mechanical issue. He bounced back the following day to be among the front runners, until he ended his main event in the tires after contact. 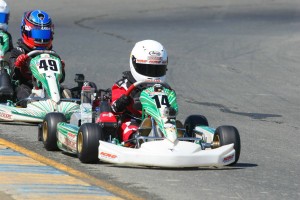 Rolison Performance Group is taking requests for Arrive-and-Drive programs or transportation opportunities at the Rotax Can-Am ProKart Challenge and the Superkarts! USA Pro Tour. April 25-27 opens up the Can-Am program, set for a trip to the Horn Rapids Kart Track in Richland, Washington. The following weekend, RPG loads up for the opening round of the SKUSA Pro Tour – the SpringNationals – set for Dallas Karting Complex in Caddo Mills, Texas on May 2-4. For more information on all the services that the Rolison Performance Group has to offer, visit www.rolisonperformancegroup.com or find them on Facebook.

About Rolison Performance Group:
The Rolison Performance Group is a leading race team and prep shop in American karting, and is also a RotaxServiceCenter and a Kosmic chassis dealer. Owner Mike Rolison, known as “Roli” at the racetrack, has built a career coaching some of the best kart racers on the West Coast. Over the past decade, he has helped 100′s of drivers and mechanics improve their craft. Mike brings world class driving and coaching experience to every racer he works with. Drivers that have been part of the Rolison Performance Group team over the past few seasons have recorded a number of national victories, claiming Superkarts! USA Pro Tour and Rotax Challenge of the Americas titles. RPG provides trackside support and arrive-and-drive programs for many series, including the Florida Winter Tour, Challenge of the Americas, US Rotax Grand Nationals, Pan-American Challenge, SKUSA Pro Tour, Can-Am Karting Challenge and the SKUSA SuperNationals. The team is a Kosmic chassis and product line dealer and is proud to campaign karts on the regional and national stage.