Two wins in one weekend for the up-and-coming star 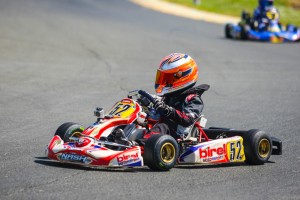 ‘Jetpak’ Jak Crawford, the Nash Motorsportz Rotax Micro Max driver, posted his third, two-race weekend sweep at this past weekend’s final round in the 2014 Rotax Challenge of the Americas (COA) program. Taking place at the Sim Raceway Performance Karting Center in Sonoma, California, Crawford was once again able to double up on his competition taking home both main event victories and ultimately claiming the 2014 Rotax Micro Max championship.

Heading into the COA, the challenge for the young eight-year-old would be that the tracks and facilities were all new venues for the talented Texan. With the goal to win a race or two throughout the series, ‘Jetpak’ Jak dominated the Micro Max ranks and achieved seven feature wins at International Rotax Max Challenge events in the first three months of 2014.

The Rotax Micro Max field of drivers in Sonoma would prove to be the most talented of the year with several fast, local favorites joining the competition at the tough track. Saturday’s qualifying action would start well for ‘Jetpak’ with a second place effort and an outside front row starting spot for the prefinal. In the opening laps of the prefinal, Crawford’s kart lacked grip and Jak quickly found himself falling down the running order. The Woodlands, Texas pilot would be involved in an incident with another competitor as an ill advised move from the other driver would send him over the curb and into Jak, ultimately sending him into the infield.

Waiting until the other drivers cleared and entering the track in the very last position, Crawford began to gain as many spots as he could before the end of the prefinal and would eventually end the heat in the 12th position.

With the championship on the line and from his outside row six staring spot for the main event, ‘Jetpak’ raced like a driver on a mission who would not be denied a win. Slicing and dicing his way through the field cleanly and confidentially, ‘Jetpak’ was in a hurry to get to the front. Finally, with one lap to go and sitting in fourth position, he ran his fastest lap of the race and it was enough to pull him into a draft at the bumpers of the leading trio of drivers. In a surprise move entering corner one, ‘Jetpak’ made the boldest and most competent move of his young career and overtook two karts on the inside with a skillful late braking move. With nearly a full lap remaining and sitting in the second position, he stalked the leader’s bumper as he waited for the perfect moment. Entering the last corner on the last lap, Crawford kept his momentum high and was able to use the tow down the main straight to draft by his competitor taking the race win by a scant .067 seconds.

Counting his win just two weeks ago in which Crawford pulled the same last minute move and claimed the Florida Winter Tour victory by only .025 seconds, Crawford had claimed two main event victories by less than a tenth of a second combined.

As was the case in both previous Challenge of the Americas rounds, the entire event weekend would prove to belong to ‘Jetpak’ Jak. Winning the pole position on Sunday, and putting his problems from the day before behind him, the Nash Motorsportz driver would go on to win the prefinal. Relinquishing the lead once and falling to fifth in the prefinal while he waited for his Birel chassis to hook up, he quickly moved his way back to the front of the field.

Later for Sunday’s main event, Jak maintained his pole position the entire race and drove to a nearly seven second victory – his largest margin of victory and more than all the other six Challenge event win margins combined. ‘Jetpak’ Jak, the rookie Rotax Micro Max driver, would then be crowned the 2014 Rotax Challenge of the Americas champion.

Jak wishes to thank the following people for his successful West Coast Rotax racing debut over the past few months: The entire Nash Motorsportz team including Seth Nash as engineering consultant, Chris Freckleton as engine builder/engine consultant and Tyler Grant as mechanic, all part of the Los Angeles based Nash Motorsportz/Precision Works Racing Engines team. Jak wants to make a shout-out and say congratulations to his best West Coast buddy Cole Keith Coltham for his second place finish on Sunday in Sonoma.

Jak will race in nearly fifty national and regional karting races in 2014. His main 2014 goal is to win the Rotax Grand Nationals in his rookie attempt.  For more information on ‘Jetpak’ Jak, or to place sponsorship or calendar inquiries, please contact Nikki Crawford at nikocraw@gmail.com. Also, be sure to like ‘Jetpak’ Jak Crawford on his new Facebook page at www.facebook.com/jetpakjakcrawford.