CRG-USA completed the 2014 Rotax Challenge of the Americas season this past weekend (April 5-6), recording its best results of the season. Contesting the final weekend of the winter season at the beautiful and challenging SimracewayPerformanceKartingCenter in Sonoma, California, CRG-USA supported six drivers across four different classes this past weekend. Half of those drivers left ‘wine country’ with a piece of hardware, securing victory over the two rounds of race. Andy Lee and Sabre Cook split the feature wins in the competitive DD2 division, with DD2 Masters driver Mike Urban recording his first series victory.

Entering the final two rounds of the Challenge, Cook was 53 points out of the championship lead. Round Five on Saturday started off with Cook recording the second quickest lap of the session, missing out on five bonus points. The Prefinal was a great 17 lap long race that featured Cook going back and fourth for the race lead. Cook would emerge as the quicker driver at the end, scoring the race win. Sabre was poised to make her run for a second straight feature victory, leading the opening five circuits of the 20-lap feature race. Unfortunately Sabre’s race day would come to an early end as an electrical issue stalled her CRG Darkrider to a stop. Cook returned for the final day of competition with only one thing on her mind…winning. She qualified only three tenths of a second off the pole position in the third position, setting up for a day long battle. Sunday’s Prefinal had shades of Saturday’s version of the race, with Cook trading blows for the lead several times in the late stages of the race. This time Cook settled for the second place spot. The main event was a continuation of the Prefinal, until Cook took the lead on lap 10 and never looked back. It was a three-second margin for the CRG-USA driver at the line, earning her second victory in three races to claim the vice-champion spot in the championship. 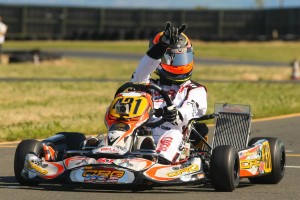 Andy Lee joined CRG-USA for the 2014 Challenge, and brought a great racing resume with him. Race wins was the goal in mind for the Arizona driver all three events, coming up just short in Tucson. The weekend started out slow for Lee, having to advance from the fourth position in qualifying into third in the Prefinal. The main event started with Andy seeming content to sit back and wait for his opportunity. His CRG laid down the fast laps of the race late in the going, and Lee took over the lead in dramatic fashion on the last circuit for his first series victory. Lee carried his speed over to Sunday, posting the second fast lap of the session. He drove to a hard-fought third in the Prefinal, but a late spin in the main event took him out of contention for the win and into the fourth position to close out the season third in the championship standings.

Joey Wimsett completed the 2014 version of the Challenge with a strong weekend in Sonoma, spending his third weekend gaining valuable data for the CRG-USA Senior Max program aboard the CRG chassis. Joey nearly cracked the top-five in qualifying on Saturday, advancing forward in the Prefinal. Running in second to start the main event, Wimsett looked stronger than ever. Navigating the torturous tic-tac-toe section of the course, Wimsett’s chain popped off his drive system, ending his day early. Sunday faired much better in the end for the 2013 Rotax Grand Finals DD2 runner-up. He qualified seventh but contact dropped him to the tail of the field to start the feature in the 12th position. Wimsett prepared to come from back in the main event, putting his head down and fought his way up to the fourth spot for his best result of the series. 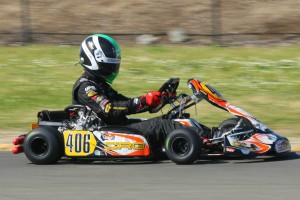 “It was a great end as far as results for the Rotax Challenge of the Americas for us,” stated Stacey Cook – owner of CRG-USA. “We enjoy racing at the program, with many friends and fellow competitors helping to take our program up further every day. Sabre’s win was very exciting, as we know she has the talent for more in the future. It was exciting to see Andy earn his first series win as well, as he’s one talented driver and makes the CRG kart look great out there. Joey’s work progress even further, and we are happy with the results we had this weekend in Sonoma. The future is looking bright for our Rotax program as we hope to contend for some US titles in July.”

Mike Urban also enjoyed his best weekend at the Challenge this past weekend. The Billet Performance Karting driver continued to gain knowledge on the CRG brand, as the featured Denver area dealer. Urban continued to pick up pace throughout the weekend, earning the DD2 Masters victory on Saturday as the sole entry, placing second in Sunday to earn the vice-champion position in the title chase. In total, Mike made four podium appearances in the six-round series. Terry Cook and Jim Weaver contested the Masters Max category for CRG-USA. Weaver, who made his series debut at Phoenix in February, drove to a pair of top-15 finishes, while Cook made his series debut in Sonoma with a 12th place result Saturday followed by a 10th on Sunday. Both drivers enjoyed their time with CRG-USA over the weekend, each making their own progress over the three day period.

Following the team’s trip to Sonoma, the CRG-USA team will return home to prepare for the opening two rounds of the Superkarts! USA Pro Tour at the Dallas Karting Complex set for May 2-4. CRG-USA will be in the Dallas area beginning April 23 as they support CRG drivers at the Texas ProKart Challenge event, a tune-up for the SpringNationals. Arrive and Drive packages are available for both events at the Caddo Mills, Texas facility. The operation will be back in Texas later this summer when they assist the Circuit of the Americas facility during their Red Fest (May 23-25) concert festival and the X-Games Austin (June 5-8), providing support for attendees taking part in the rental kart fleet racing, all aboard CRG karts.