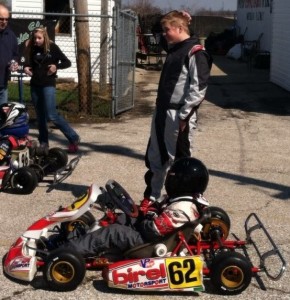 New Jim Howe Motorsports drivers Bransten Peavler and Eli Fox kicked the 2014 season off in fine style with a victory and runner-up finish respectively in the season opener at the historic Whiteland (IN) Raceway Park half-mile road course.

Peavler, 15, qualified on the pole for the 25-lap Junior Supercan feature in his #62 JHM/Max Powder Coating/BBS Race Engine Development Birel. At the start, however, Aaron Maxwell got the jump to take the early lead. Peavler (Alexandria, IN) followed Maxwell for five laps then executed a slick move on the outside of Maxwell’s Margay between the left-hand hairpin (turn four) and turn five right-hander.

When Maxwell spun a couple laps later while trying to keep up with Peavler’s slightly-faster mount, affectionately nicknamed “Karma,” the margin swelled to five seconds and Peavler cruised to the finish.

“The kart got a little tight at the end,” Peavler noted, “and my Mychron wasn’t working so I really couldn’t tell how fast I was going or how many laps were left. I got pretty tired there at the end too!”

In earlier action, the 10-year-old Fox (New Ross, IN) qualified second in Junior Sportsman, then led the first lap of that division’s 25-lap shoot-out before falling to pole-sitter Makala Marks. Marks led the rest of the way although Fox made progress in the last third of the event to close the margin. The effort was for naught, however, as Fox and his #62 Birel – nicknamed “Mo” – tagged a lapped kart two laps from the end to fall back to five seconds behind Marks.

“I thought both boys looked very comfortable in their races and we had no serious issues, mechanical or otherwise, throughout the day, “owner Jim Howe noted afterwards. “They both looked very comfortable out there and their times were outstanding so I thought today was a total success and a great way to prepare for our street opener in a couple of weeks.”

For Peavler, the 2013 Southern Indiana Racing Association (SIRA) Rookie of the Year, it was his first victory in his short career and came in his tenth start in a kart. Peavler’s victory also marked the third straight year a JHM driver had put “Karma” in victory lane. Daniel Pearcy (Shelbyville, KY) posted five wins in 2012 and Cokie Gaich (Indianapolis) had two wins in 2013 in the same kart. Peavler’s victory also marked the fourth straight year a JHM driver had visited victory lane for the Columbus (IN)-based team at the club level of racing.

Next up for the team is the “Mayor’s Cup Grand Prix” in the streets of Anderson (IN) on April 26-27. This is the first of ten scheduled SIRA races Peavler, Fox, and the JHM team will be competing in this season as they chase the SIRA Junior 1 (Sportsman) and Junior 2 (Supercan) championships.