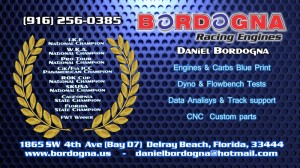 After showing speed and winning results at the opening months of 2014 at the Formula Kart Productions Florida Winter Tour (FWT), Bordogna Engines powered drivers dominated the month of March in the Sunshine State. Taking place at the spectator friendly Orlando Kart Center in Orlando, Florida, Bordogna drivers would kick off their month of victories at the first round of the Rok Cup USA program.

Australian driver Lochie Hughes would be on a mission in Orlando as he would kick his three week tour off in fine form at the opening round of the Rok Cup USA, Competing aboard his Bordogna Engines powered Praga chassis, Hughes would claim a pole position, a prefinal win and main event victory to be the first official winner of the United States series.

Rok Junior pilot Luis Forteza III from Puerto Rico would follow in the footsteps of Hughes as he mirrored his results throughout the weekend. Scoring the trio of pole position, prefinal win and main event victory, Forteza would make it two for two for Bordogna Engines. Masters driver Francois Brun Wibaux and his PCR chassis would add another win to the Bordogna Engines resume, as he would take the top honors in the Super Rok class.

The following weekend would see competitors return to the same OrlandoKartCenter facility, this time for rounds five and six of the Formula Kart weekend of the Florida Winter Tour. Continuing where they left off, it was Lochie Hughes who added another two victories to his month of March as he took home the checkers in both Saturday and Sunday’s main events.

The new driver who joined to Bordogna was Dylan Tavella who made an impressive drive from 17th to third. in Sunday’s main event as the youngster from New York provided Bordogna with another podium result.

Continuing to compete at events throughout the state of Florida, Bordogna Engines took on the opening round of the Florida Karting Championship Series during the last weekend of March. Taking place at the Monticello Karting track near Tallahassee, Bordogna Engines added to their successful month. Zachary Hollingshead aboard his Tony Kart chassis took the top step of the podium in Vortex Mini Rok while Brun-Wibaux won TaG Masters. Darren Rackley, competing aboard a Spirit chassis garnered his first podium in the Cadet Sportsman division after leading a handful of laps in the day’s main event. BENIK Kart pilot Jo Nunez would use a Bordogna tuned engine in the Rotax Micro Max ranks taking the pole position and prefinal win. Leading the main event and looking to take the victory, Nunez would be involved in an incident a few corners from the finish and was forced to retire before making it to the checkers.

“We are very pleased with the recent success,” explained Daniel Bordogna. “We are now gearing up towards the USPKS (United States Pro Kart Series) this coming weekend in Mooresville, North Carolina and will look to continue with good results. Also, we have begun to introduce our new line of CNC produced karting components and will have them available at all future events.”

Bordogna Racing Engines is located in Delray Beach, Florida. Bordogna offers an engine rental program, dyno testing, blue printing and maintenance of engines for all classes from Cadets to KZ1, as well as flowbench testing and CNC customized parts and accessories for engines. For those looking to get more power from racing engines to get to the front of the pack, contact Daniel by visiting his website at www.bordogna.us, call (916) 256-0385 or email danielbordogna@hotmail.com.