CRG-USA has contested a successful three months of the 2014 season, as the Colorado-based operation continues to compete among the top race teams in North America. This coming weekend (April 4-6), the final two rounds of the Rotax Challenge of the Americas will take place at the SimracewayPerformanceKartingCenter in Sonoma, California with the CRG-USA operation primed for race wins and a possible championship.

Sabre Cook is preparing for what could be the race weekend of her life in Sonoma, as she’ll need a perfect two rounds of racing in order to claim the championship in the DD2 class. Cook, who enters the final weekend of the Challenge second in points, has been impressive in her DD2 debut at the series. Cook has finished off the podium once in four rounds of racing, scoring her first win at the Challenge during the last round in Phoenix. Cook will start the championship weekend 53 points out of first with two full rounds of racing left. On the line, aside from the prestige of the championship title, is a ticket to compete at the 2014 Rotax Grand Finals later this year. Right behind Cook in the DD2 standings is CRG-USA teammate Andy Lee. Scoring a season high second place finish at Round Two in Tucson, Lee has been a threat to podium each round of the Challenge. The Arizona racer is looking to finish the series strong and end up on the championship podium. 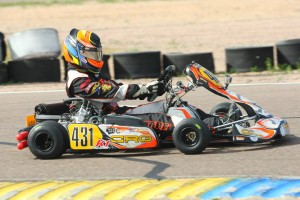 Joey Wimsett will wheel a CRG-USA entry in Senior Max category this coming weekend. The Oregon native has been a major asset to the team as he has brought a vast wealth of knowledge into the tent as not only a driver, but with his mechanical expertise. Wimsett has focused on helping CRG-USA develop their knowledge of different CRG models by competing on a different frame at each of the series two completed weekends. Wimsett showed speed at the end of each race day after logging time and data on each new chassis. Wimsett comes into Sonoma off his highest finish of the season at Round Four in Phoenix, where he and the CRG-USA team battled all day to record an impressive sixth place finish in a very talented Senior field. Joey occupies the 10th position in Senior points prior to Sonoma, and is within striking distance to move up the final standings before the weekend is over, gunning for podium finishes.

Representing the CRG-USA brand in the DD2 Masters category will be Billet Performance Karting’s Mike Urban. After joining forces with CRG-USA to begin the year, Urban comes off a successful weekend in Phoenix where he finished on the podium in both rounds. Jim Weaver will be joined by first time Challenge racer Terry Cook as the pair will contest the Masters Max division. Weaver’s first weekend racing the Challenge was in February in Phoenix, where he recorded top-10 finishes both days.

Following the team’s trip to Sonoma, the CRG-USA team will return home to prepare for the opening two rounds of the Superkarts! USA Pro Tour at the Dallas Karting Complex set for May 2-4. CRG-USA will be in the Dallas area beginning April 23 as they support CRG drivers at the Texas ProKart Challenge event, a tune-up for the SpringNationals. Arrive and Drive packages are available for both events at the Caddo Mills, Texas facility. The operation will be back in Texas later this summer when they assist the Circuit of the Americas facility during their Red Fest (May 23-25) concert festival and the X-Games Austin (June 5-8), providing support for attendees taking part in the rental kart fleet racing, all aboard CRG karts.