The 2014 Rotax Challenge of the Americas will come to a close this weekend, returning to the SimracewayPerformanceKartingCenter in Sonoma, California. The popular circuit located on the Infineon Raceway grounds has been site to many regional, national and international events over the years, including the 2010 and 2011 series finales for the Challenge. After a two year hiatus, the series returns to ‘Wine Country’ to crown the 2014 Challenge champions.

On the line during the weekend will be seven international Rotax Max Challenge championships, including a paid entry (should driver be qualified through their local USRMC) to the 2014 United States Rotax Grand Nationals at the Miller Motorsports Park in Tooele, Utah on July 17-20 for three drivers. Racers in the Senior, DD2, DD2 Masters and Junior Max divisions will fight for the title, and earn one of the four tickets up for grabs to the 2014 Rotax Grand Finals. Here is a look below at those four championship chases to be completed this weekend in Sonoma. 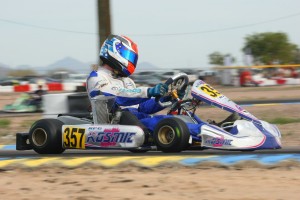 Defending Senior Max champion Phillip Arscott is in the driver’s seat for a repeat (Photo: SeanBuur.com)

Holeshot Drive Systems Senior Max
The first four rounds for the Senior Max category has been about making the least mistakes. Through those events, there has not been one driver who dominated the speed charts, as nearly the entire field have been within two or three tenths of each other. That tight grouping of the drivers put an emphasis on qualifying and Prefinal performances in order to be in contention for the podium. Championship leader and defending champion Phillip Arscott has done just that, as the Rolison Performance Group driver enters the series finale with a sizeable 90 point lead. Three straight podium finishes led to a perfect score in Round Four, placing the former US Rotax Grand Nationals champion at the top of the championship chase. 2 Wild Karting’s Jake Craig (Tony Kart) won the middle two rounds – one at Tucson and one at Phoenix, but a technical disqualification in Round Four hurt his chances in the title hunt. Unable to drop the infraction, Craig will need perfect scores and some bad luck for the defending champ in order to dethrone the Oregon driver.

Among the quickest throughout the series has been former Junior Max champion Louie Pagano. The Dallas Karting Complex/Sodi Kart driver earned his first podium finishes of the series in Phoenix, and is sure to be among the favorites once again at victory. Round One winner Phil DeLaO will be absent this weekend, and thus the question remains, who can stop Phillip Arscott? 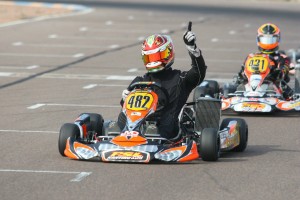 Rookie sensation Gavin Reichelt looks to keep the DD2 competition behind him this weekend (Photo: SeanBuur.com)

Energy Corse America DD2
It has been the Fritz Leesmann show the past two seasons in the DD2 category, and with his absence brought about some of the best racing the series has seen in the class. A good handful of drivers have fought it out for the top step of the podium each of the four rounds, with New York driver Gavin Reichelt breaking through with three wins. The PSL Karting DD2 rookie has a 53 point lead going into the series finale. CRG-USA’s Sabré Cook came through with the Round Four victory, breaking up Reichelt’s win streak. The win was her first, and brought about hope for challenging for the title this weekend. Third in the chase is first time Challenge competitor Andy Lee, as the CRG-USA driver looks for a return to the podium in Sonoma after getting shut out in Phoenix. 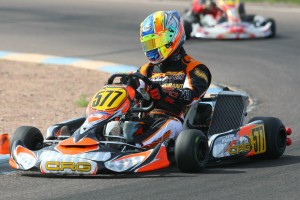 Veteran Alan Rudolph is in position for his third straight Team USA ticket to the Rotax Grand Finals (SeanBuur.com)

CRG-USA DD2 Masters
Eye’s were on defending champion Alan Rudolph before the series started. The PSL/CRG driver has been perfect through the first four rounds, and has all but locked up the championship. A two-time Team USA member at the Rotax Grand Finals is determined to return to the 2014 event after what could have been a possible world championship this past November in New Orleans. His closest competitor in the title chase – Ben Johnston (CRG-USA) – will miss the weekend in Sonoma due to scheduling conflicts, putting his teammate Mike Urban in the driver’s seat for the vice-champion position. Despite Challenge promoter Andy Seesemann’s attempt to bring in more drivers to the category with the $1350 bounty to beat Rudolph, no one has stepped up to the task as Rudolph will look to extend his nine race win streak. 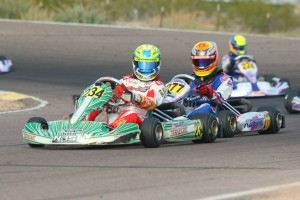 Rolison Performance Group Junior Max
The category to watch year after year continues to be the Junior Max division. Each of the past two seasons, it’s come down to the final day and nearly the final laps. This weekend should be no different with two veteran Junior drivers gunning for the crown. Christian Brooks and Austin Versteeg have swapped race wins over the first four rounds of competition. Versteeg (Rolison Performance Group/Kosmic) has struck first both weekends, scoring a perfect round at the Phoenix opener. Brooks (Nash Motorsportz/Tony Kart) has fought his way for his two wins, earning the second with a last lap pass in the most recent feature race. One positive is that Brooks has landed on the podium in all four races, giving him a 13 point advantage going into Sonoma.

Hot on their tails is ART GP America driver Phillippe Denes. A two-time podium finisher himself, he is still within striking distance should he come through the weekend with two perfect days. Kyle Wick and Canadian Jeff Fulham – both racing out of the Rolison Performance Group/Kosmic tent – have visions of sliding onto the championship podium, eyeing the third position with solid performances needed both days.

For complete coverage, please visit the EKN Event Page and tune into the Trackside Live coverage throughout the weekend.