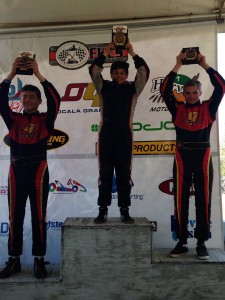 Seve DePinto topped the blocks during Sunday’s action at the opening round
of the 2014 FKCS program (Photo: Vito DePinto)

Seve DePinto, one of Florida’s most underrated and talented drivers, traveled to the Monticello Karting facility near Tallahassee, Florida for the opening round of the 2014 Florida Karting Championship Series this past weekend. Competing in a pair of junior divisions, DePinto would run at the front of the field throughout the two day event scoring a pole position, heat race win and main event victory over the opening round.

After a successful test day on Friday, DePinto would hit the track on Saturday morning with heavy rain in the area. Circuiting the facility on the Bridgestone rain tires, Seve would run into electrical issues that would not be resolved before qualifying. Forced to miss the timed session, DePinto would start his Parilla Junior prefinal from the tail of the field.

Taking no prisoners on the opening lap, DePinto sliced and diced his way to the front before the close of the prefinal’s first lap. Showing his experience and never say die attitude, the young up-and-comer drove to victory and secured the pole position for the day’s main event. Looking to repeat his performance in the main event, DePinto would jump to the lead but fall back to fourth after a fierce multi-lap battle. Working his way back to the front, DePinto would make his pass for the lead on the final circuit only to have his chain break the very next corner. Forcing him to retire from the event, DePinto would be classified in the fifth position.

“It was a day of bad luck,” expressed DePinto. “With electrical issues in the morning and then a broken chain in the main event, I am hoping to come back tomorrow and improve and stand on the podium.”

Back to the track on Sunday and with winning on his mind, DePinto would enter the TaG Junior class and immediately make his presence felt. Showing speed in the morning warm-up session, the TS Racing driver went on to take the pole position in the morning qualifying session before finishing second in the prefinal after leading early.

Starting the main event from outside row one, DePinto rocketed to the lead and never looked back. Leading from flag-to-flag, DePinto would score his first FKCS victory of 2014 and leaves the first event as the point leader in the TaG Junior division.

Seve and Vito DePinto would like to thank TS Racing’s Dave Baker and Todd Spaude as well as Jacob Duvall and Robert Warren for their help and support. Seve would also like to thank his friends and family for all of their continued support.