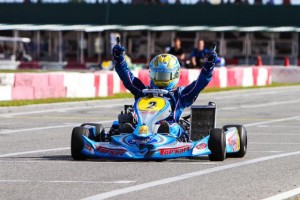 Exploding onto the Formula Kart Productions Florida Winter Tour (FWT) back in January, Indiana-based Top Kart USA capped off the popular winter series with multiple race wins and a one-two finish in the TaG Junior championship. Showing their true speed at several different tracks, team drivers once again proved that the Top Kart equipment is second to none.

After two successful rounds at Homestead and Ocala, the team would then make the final trek to Central Florida as OrlandoKartCenter would host the finale rounds. Located only twenty minutes from downtown Orlando, the spectator friendly facilities provided for some fierce competition as well as another win for the Top Kart brand.

Taking to the first of two official event days on Saturday, TaG Junior drivers Zach Holden, David Malukas and Julia Boos would look to take Top Kart to the front of the field. Holden would be the driver to beat scoring the pole position and maintained his front of the field position with a dominating victory in the main event, his first career FWT win. Malukas would put two Top Kart drivers in the top-ten as he turned his eighth place qualifying effort into a seventh place result while Boos would end her day in 18th.

Back to the track Sunday, Malukas would be the best of the Top Kart drivers as he took the pole position in the morning timed qualifying session. Holden would start his day eighth and Boos would crack the top-ten in tenth. Holden, fighting for a championship, would do what he needed to secure the title taking home a fifth place finish in the day’s main event with Boos in 14th. Malukas would show speed early and battle at the pointy end of the field but would narrowly miss the victory and cross the line in second.

“We are very happy with the Junior drivers in our program,” explained Bill McLaughlin Jr. “Both Holden and Malukas are rookies to the Florida Winter Tour, and two of only three Top Karts in the field, and they managed to finish first and second in the championship. Congratulations to them and Top Kart USA for a great effort.”

Stone Slattery and Lance Fenderson would be the TaG Cadet duo running under the Top Kart USA banner. While both drivers would struggle with on track incidents on Saturday, Fenderson would turn Sunday’s strong qualifying effort into a seventh place result. Slattery showed improvement throughout the weekend but a first corner incident would take him out of contention for a good finish.

Mark Boos and Bill McLaughlin Jr. would enter the talent filled TaG Senior ranks with both drivers running inside the top-ten for the majority of the event weekend. Boos would qualify his Top Kart in P6 on Saturday but would fail to finish the main event after a promising start. McLaughlin would qualify seventh but fall back to 12th by the final checkered flag. Sunday would see the roles reversed as Boos finished his FWT campaign with a 12th place effort while McLaughlin was involved in a first lap incident and was forced to retire. 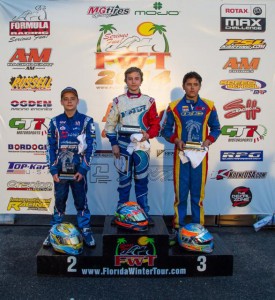 With no time off between events, Malukas and Julia Boos would be back the following weekend to compete in their Rotax powered Top Karts for the final round of the series. Competing in the ultra-competitive Rotax Junior field, Malukas stole the show on Saturday turning his 22nd place qualifying effort into a very impressive fifth place finish. Boos would also climb through the field gaining twenty positions throughout the day to claim 16th in the final results.

Bettering his Saturday result, Malukas would find his way to the final step of the podium on Sunday taking home a great third place result after starting the day in 17th. Boos continued to improve her race craft and added another top-twenty finish to her resume and narrowly missed the GoRotax Hard Charger Award.

Top Kart USA will now make the long journey home before heading to Kershaw, South Carolina for the second event weekend in the 2014 World Karting Association Manufacturers Cup program. Taking place at the CarolinaMotorsportsPark, Team Top Kart USA will look to build on results from the opening round of the series and secure their lead in the overall Manufacturers Cup running.