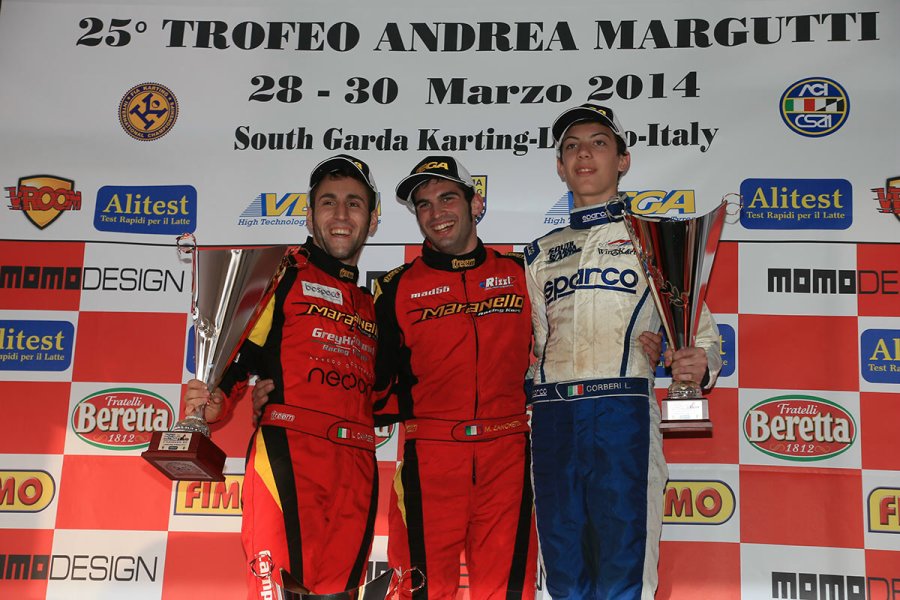 A great spectacle took place at the South Garda Karting of Lonato during the Andrea Margutti Trophy, race organized by Parma Karting, who accomplished the task of honouring in the best possible way the 25th edition of the trophy that remembers a young promise of international karting, Andrea Margutti, who passed away in 1989 at the race track of Parma. 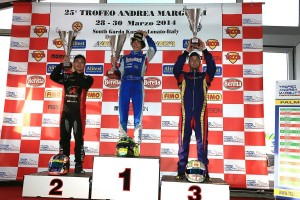 The historic organizers of the race took part in the event, starting from the former patron of the Parma track Umberto Pellegrini, Andrea’s mother Patrizia and the World Endurance Championship driver Andrea Belicchi, who was the first winner of the Margutti Trophy back in 1990, were present at the event too. This year the event featured once again the participation of a lot of drivers, 200 racers made it to the track in fact representing 30 countries and 4 continents.

The karting weekend provided an excellent confirmation of the values on the field at the end of the 25th Andrea Margutti Trophy. The success went to some international karting protagonists, like the Italian Marco Zanchetta (Maranello-TM), who won the most powerful category KZ2, Alessio Lorandi (Tony Kart-TM) clinched the victory in KF, the Briton Maximilian Fewtrell (FA-Vortex) dominated in KF Junior, while the very young Canadian Antonio Seravalle (Tony Kart-LKE) won in 60 Mini.

MARCO ZANCHETTA IN KZ2
Marco Zanchetta (Maranello-TM) secured the victory in KZ2 as he was a splendid winner of the Final after ruling in qualifying heats and in the Prefinal. Zanchetta got the lead of the Final since the beginning and was followed closely by his team mate Lorenzo Camplese. The race came to an end as the two crossed the finish line in a parade. The third place went to Luca Corberi (Kosmic-TM) who would have actually deserved to fight with the two drivers in force at team Gerber-Maranello if he were not slowed down in the initial stages of the race. Simone Brenna and the Croatian driver Kristijan Habulin, both on TB Kart-Modena, ended fourth and fifth. The driver from Brescia Andrea Dalè (CRG-TM) closed sixth after being among the protagonists in the initial stages of the weekend. 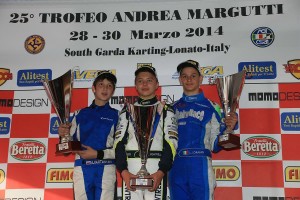 SECOND VICTORY FOR ALESSIO LORANDI
The driver from Brescia  Alessio Lorandi (Tony Kart-TM) – the 2013 World Champion at his second win in the Andrea Margutti Trophy – did not have too many problems securing another win in KF after having won it – again with Baby Race – back in 2010 in 60 Mini. Lorandi has always been the quickest throughout the weekend, starting from qualifying, heats, Prefinal and Final that was dominated from lights to flag. On the KF podium was also the Briton Julien Fong (Tony Kart-TM), who was second ahead of the Milanese Andrea Moretti (Exprit-TM). The fourth place went to the Venezuelan driver Sidney Gomez (CRG-TM) who recovered all the way from the 11th place at the end of a nice battle with Stefano Villa Zadotti (Tony Kart-Vortex) and with the Danish driver Nikolai Kjaergaard (Energy-TM).

THE BRITISH FEWTRELL WINNING KF JUNIOR
The Briton Maximilian Fewtrell (FA-Vortex) in force at team Ricky Flynn topped KF Junior’s charts. He dominated the scene from qualifying, winning heats and Prefinal. The second place in the Final, behind Fewtrell, went to the Russian Alexander Vartanyan (Tony Kart-Vortex) from team Ward Racing, while the third went to Leonardo Lorandi (Tony Kart-TM), Alessio’s brother, who experienced a very steep weekend due to a penalty he was handed in qualifying on Saturday morning. The fourth place went to Lorenzo Travisanutto (PCR-TM) instead, after he ended the Prefinal in second place. The fifth place was secured by the British Martin Ross (Tony Kart-TM), who proceeded the German Lirim Zendell (Tony Kart-Vortex) and the American Logan Sargeant (FA-Vortex). 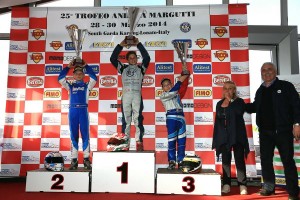 A YOUNG CANADIAN WINNING THE 60 MINI
The Final of the 60 Mini went to the very young Canadian Antonio Serravalle (Tony Kart-LKE) who clinched the victory at the end of a spectacular challenge for the victory. The second place in the sprint to the line went to Dimitri Bogdanov (Tony Kart-LKE), while Christian Cobellini (Top Kart-Parilla) ended third. Top five finish for Nicola Abrusci (Tony Kart-LKE) and Giuseppe Fusco (Lenzokart-LKE) instead.

All results of the weekend are available at www.trofeomargutti.com

The event will be aired on TV by the GO-KARTv magazine on April 6th on ODEON TV at 21.30 (GMT+2). The live streaming of the event has been on: www.odeontv.net. The special will also be aired by another national TV Channel and by 80 more channels covering the whole Italian territory. It will also be available at http://www.go-kartv.com. All the Finals will be available through Youtube at www.youtube.com/user/Ricky8241?ob=0&feature=results_main