Series promoter gearing up for sophomore season of growing program

A new era in karting began in April 2013 when the United States Pro Kart Series launched at the GoPro Motorplex. Roughly 120 drivers battled heavy rain conditions in what was the beginning of a new professional karting series. Seven categories, focused on providing maximum track time around two engine programs, opened up the competition as solid fields contested the four weekend schedule last year. The buzz from teams and drivers following the new program spread throughout the karting community, and the momentum is carrying over to the second season in 2014. 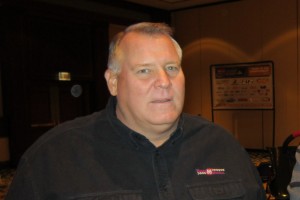 The USPKS program has expanded for the upcoming year, moving to eight classes to balance out the TaG and Yamaha categories offered while providing an internal ladder system in both. The Mini Rok class is new for 2014, utilizing the popular Vortex engine, with a stand-alone Leopard Junior created as well. The Leopard Pro remains as the headline class, with the Parilla Challenge welcoming a mix of Semi-Pro and Masters drivers into one championship. Yamaha divisions remain unchanged, building from the Rookie class up to Cadet, Junior and then the headline Senior class.

The schedule remains at four weekends, providing eight rounds of championship racing. The season begins again at the GoPro Motorplex in Mooresville, North Carolina on the April 11-13 weekend. A two month break allows racers to prepare for the first series trip to the MichianaRacewayPark in North Liberty, Indiana on June 20-22. The second half of the series travels to the 2013 finale location – Pittsburgh International Race Complex in Wampum, Pennsylvania over the July 25-27 weekend. The 2014 USPKS season wraps up at the popular New CastleMotorsportsPark on August 15-17, with the year-end banquet ceremony that Sunday evening.

Talk within and around the karting community is providing a big outlook on the upcoming United States Pro Kart Series season, with new drivers, new teams, and new businesses showing their support and commitment to the program for 2014. Series promoter Mark Coats has been busy since the season wrapped up last September, preparing to take the program to the next step in providing one of the top professional karting series in the country.

Coats began in the sport as a 12-year old driver, about 43 years ago, at the Mid-State Kart Club. From there, it became a passion of his. Through the years, he volunteered to help with the off-track activities of the club and eventually went on to help the formation of the Route 66 Sprint Series – which began as a traveling program between Mid-State and what is now the Concept Haulers Motor Speedway. The series grew from there and is now one of the leading regional programs in the country. Last year’s debut of the USPKS is the next step for Coats, and eKartingNews.com was able to track him down for a few questions regarding the present and the future of the program.

eKartingNews.com: Overall, on a scale of 1 to 5, with 5 being the highest, how would you rate the USPKS in 2013…and why? 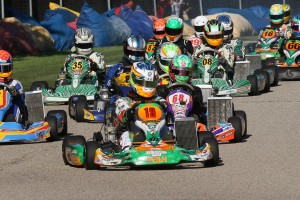 Mark Coats: I’m prejudice and say it was a 5, with the note that there is room for improvement, and we are going to do that moving forward. Image is among the main focuses during the off-season. We want to establish the USPKS as a professional series, not just another go-kart race. When racers get to Mooresville, they will be greeted by our new credentials tent to pick-up or purchase their passes for the weekend. A parking map will be provided ahead of the weekend so teams and drivers know exactly where they are set up for the weekend – thanks to George Sieracki at Franklin Motorsports. We also have a new registration and apparel tent. If drivers are already pre-registered, it takes about 10 seconds to verify the pit pass, you are handed your packet, and off you go. It’s that simple. The apparel side has all the gear you need to help promote the series when you go back to your home track.

There are going to be roughly 30 banners and signs around the facility, sporting our sponsors and supporters logos and names, including a big presence from MG Tires. A number of them include major shops and teams from this side of the Mississippi, including Mazda signing on board to help support what we do. Throughout the year, we have a film crew at the events, working on providing footage for a television show currently in production.

Right now, we are at 77 drivers pre-entered for the opening event in Mooresville, and at this time last year it was 10. With the recent announcement of the prize package, I feel more will finally commit to the season now that the two headline categories are very attractive to compete in. Each event, with the exception of Mooresville, we are planning special events off the track as we did last. We want the racer to be involved, and the staff interacting so they get a feel of who we are, so it’s a big family, rather than us just providing a place to race.

EKN: The series has expanded to eight class – four Yamaha and four TaG. Many racers feel that more classes means less track time. You’ve stated before that track time is a vital part of what makes the USPKS program what it is. Will there still be ample amount of track time now in 2014? 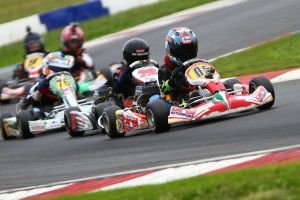 MC: We expanded to eight classes, and that is our maximum in order to provide fair racing, longer races, and more track time than any other program. With qualifying, two heat races, and 25-lap feature races, we have to limit what categories we offer. All the laps are staying the same as they were in 2013, we just extended the overall day period that the event will be conducted by a few minutes.

EKN: What do you think is another reason racers are selecting the USPKS, from your point of view as a race team owner?

MC: Racers are starting to realize the cost per lap. USPKS is more valuable then other programs around. Not one time did we have a request to extend practice at any event last year. The reason is, we provide ample amount of track time for everyone. Guys are worn out after the day is done. You get about an hour of track time for practice day, and if you run two, that’s two full hours behind the wheel. People like that without having to jump between three or four karts a day. And racers who got adjusted to just racing one class on the weekend enjoyed their time more, allowing more time to make adjustments between sessions.

EKN: Tires are a vital part of the karting industry. Without them, we don’t race. More and more, series are sticking to a spec tire program for a number of reasons. What was the main reason for switching from Bridgestone to MG Tires?

MC: The racers wanted a change. We had some issues last year in the final two events of the year and they brought up the idea of change. Racers want events to be fair, and not have to worry about getting a bad ‘batch’. We sent the tire bid out to three companies. MG Tires came back with the best bid, but they also have a great product known through Superkarts! USA and the Florida Winter Tour. Wagner Rossi and MG Tires have been fantastic to deal with and I look forward to working with them in the future.

EKN: Is there a chance at moving past five races in the season?

MC: We will see how things go with the series and the economy. Apparently SKUSA is doing right with three major events. If you look at what it costs to be competitive at a major race, you are looking at $5,000 minimal to go by the time you go with a major team or hauling yourself. I just looked at my own diesel bill last year, and it is crazy what it costs to get to events today. I’m not even sure people want five. Travel used to be the lowest amount of the equation to go racing, but now that and tires as the big factor.

EKN: Do you see the series expanding outside the current geographical area for facilities, either out west or further south then North Carolina in 2015?

MC: You will see us have a race in Florida for sure. I can’t tell you when but it will be the first event of 2015. What I hope to do is begin rotating tracks within the program so we are not traveling to the same four facilities every year. It helps to bring in new facilities to introduce our program to the local racers who may not have the budget to travel all across the country to race. I wouldn’t rule out moving west either as we are considering an event in Texas as well.

EKN: What do you expect the numbers are going to reach at Mooresville on April 11-13, and what do you hope they will be?

MC: A lot of Senior level racers were waiting on the prize package to come out, so I expect even more pre-registrations to come in. I would like to see 150 entries a day when we hit the track, and I’d hope for 200 among the eight classes. With the addition of the Mini Rok, we are going to welcome a number of people that did not race with us last year. Drivers from Florida, New York, and other regions that have not yet been part of the program are coming to Mooresville. Looking at the entries we have, I bet half of them I have no idea who they are. That’s good, because that’s new drivers to the series and I’m looking forward to meeting new people in the sport.

EKN: Thank you Mark. We are looking forward to the second season of the United States Pro Kart Series.