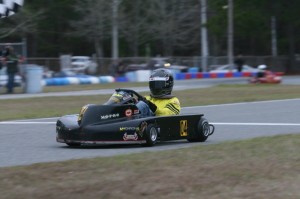 Coyote racers from across the eastern half of the country traveled to north Florida this month for the season-opening World Karting Association RLV Gold Cup Series national event at the popular 103rd Street Sports Complex, the traditional opening venue for WKA’s premier 4-cycle sprint series.

About Coyote Motorsports
Coyote is one of the original production go-kart chassis manufacturers in the United States. Based in the Rochester suburb of Spencerport N.Y., Coyote is now owned and managed by longtime kart racer Jim Lipari. In addition to chassis manufacturing, Coyote is a full-service kart shop and machine shop capable of in-house manufacturing nearly all of the components on its popular line of karts.Coyote is proud to conduct nearly all of its services at its home shop, including bending tubing with a computer-operated Pines 1000 tubing bender, TIG and MIG welding and painting with a state-of-the-art Nordson powder-coating system.To learn more about Coyote Motorsports, visit www.CoyoteKarts.com.