Spectacular WSK Masters Series Races on the Water in Sarno 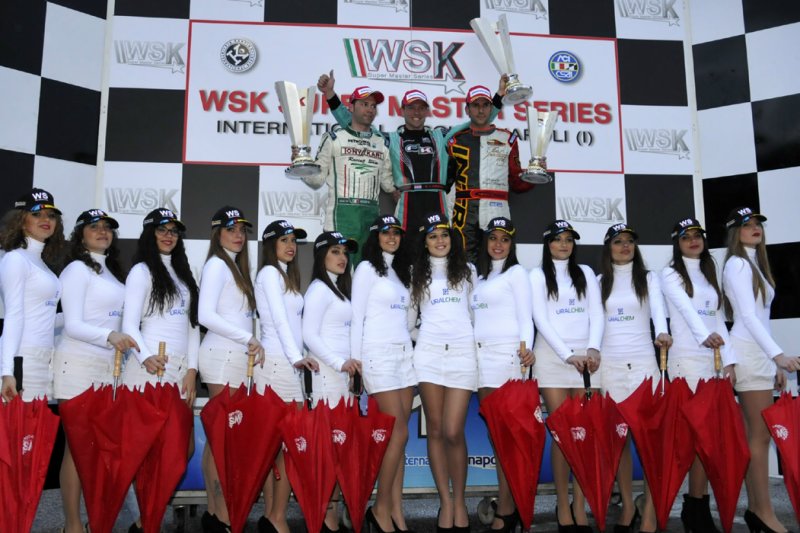 Bad weather forecasts are often good news for racing drivers. Today’s event in Sarno (Salerno, Italy) seems to support this thesis. The race hosted by the International Circuit Napoli was the first round of the WSK Super Master Series, an international kart event with 210 entrants coming from 32 different countries of 5 continents. Racing the Finals on wet track gave drivers the occasion to show their skills and made all the races very uncertain, with plenty of changes in the race standings from the beginning until the end. Drivers fought hard to score their first points which were awarded in the two Prefinals – run in the morning – and in the Finals – raced in the afternoon – of the four categories. After Sarno, the next appointments are scheduled for next 13th April in Castelletto di Branduzzo and, on 27th April, the last and decisive round of the WSK Super Master Series in Muro Leccese. Before these events, kart fans will be able to enjoy on Rai Sport 2 first the delayed broadcast of the Finals (Wednesday 26th March at 07.30pm) and then the report of the whole weekend on Friday 28th at 11.50pm.

Lammers is the surprise in KZ2
Bas Lammers (FK-Parilla-Bridgestone) was in peak form and had the upper hand over his opponents in KZ2. The Dutch driver first won in the Prefinal A after recovering eleven positions. So, in the Final, he started from the pole position, followed by the Italian Marco Ardigò (Tony Kart-Vortex-Bridgestone), the winner of the Prefinal B, and by the French Arnaud Kozlinsky (Intrepid-TM-Bridgestone). The Belgian Jonathan Thonon (Praga-Parilla) briefly occupied the second position before he got passed by Ardigò and Kozlinky. The Italian tried to close the gap with Lammers; he got really close thanks to an impressive streak of fast laps. However, the Dutchman, in the last laps, speeded up and managed to keep his rival at bay and crossed the finishing line ahead of Ardigò and Kozlinsky. 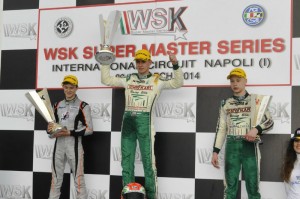 Basz is the fastest under the rain in KF
The Polish Karol Basz (Tony Kart-Vortex-Dunlop) took advantage of the wet track: he won in the Prefinal B and grabbed the pole position in the Final, where he dominated and finished the race 4 seconds ahead of the runner-up, Callum Illot (Zanardi-Parilla-Dunlop). Illot had a good start from the third row and attacked the second position of Nicklas Nielsen (Kosmic-Vortex-Dunlop). The Brit managed to overtake him; the Russian Nikita Mazepin (Tony Kart-Vortex-Dunlop) took advantage of the duel, passed Nielsen and finished third. The British Tom   Joyner   (Zanardi-Parilla),   winner   of   Prefinal  A, despite starting from the front row dropped back to 25th position because of a contact during the first phases. He recovered and finished 13th.

Ticktum attacks and wins on the water in KFJ
The Final of the KF Junior had its most spectacular moments thanks to the duel between the Italian Leonardo Lorandi (Tony Kart-TM-Vega) and the English Daniel Ticktum (Zanardi-Parilla-Vega), who started from the grid in this order. The asphalt was extremely wet and both the drivers had to use all their skill to keep their karts on track while trying to gain the lead of the race. Ticktum, who had already won the Prefinal A, wanted to achieve the hat-trick and he finally managed to be side by side with Lorandi. It was during this phase that the Italian went off the track on the grass and lost ground; Ticktum overtook him and this was the crucial episode of the Final. Ticktum was the winner and Lorandi the runner-up. On the podium also the British Enaam Ahmed (FA Kart-Vortex-Vega), who occupied the third position throughout the whole race. The performance of the Russian Matvey Maslov (Tony Kart-Vortex-Vega) fell short of expectations: he won the Prefinal A but finished only 8th. 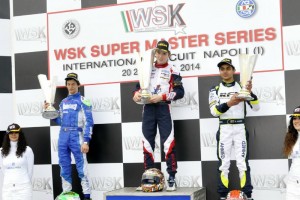 Szyszko seizes victory in 60 Mini
Outstanding start from the fourth row for Maciej Szyszko (Tony Kart-LKE-Vega); the Polish gained the lead and kept it until the end of the race. His opponents did not manage to counterattack. Behind him, only the Spanish David Vidales (FA Kart-LKE-Vega) and the Italian Skeed (Top Kart-Parilla-Vega) managed to have a start as good as Szysko’s: they started from the third and the sixth row and gained the second and third position on lap one. They kept these positions until the end. Bad luck for the winners of the Pre-finals: the Romanian Mikar Mizevych and the Italian Nicola Abrusci (both on Tony Kart-LKE-Vega) got slowed down at the start and finished fifth and seventh.