WSK Super Master Series Getting Ready for Finals in Sarno 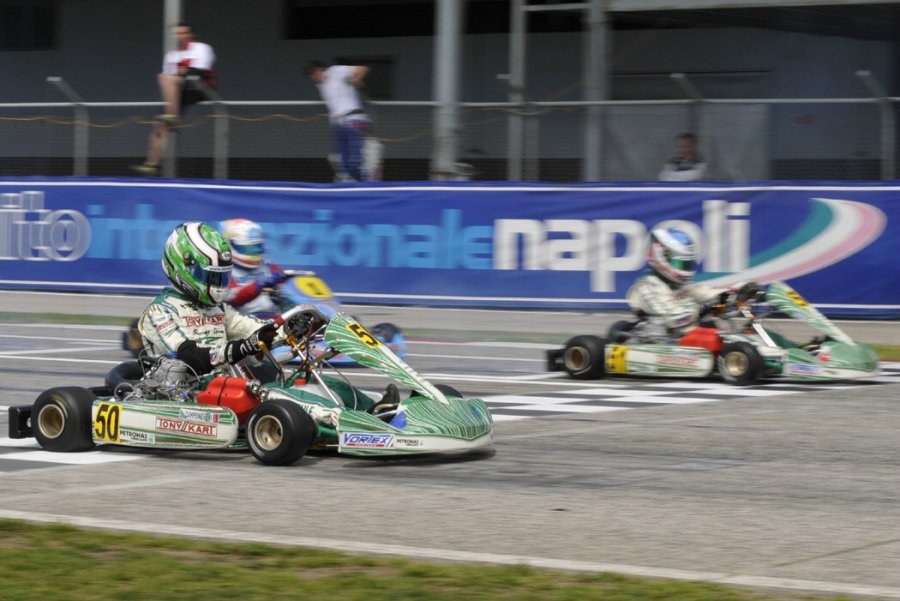 Qualifying heats are over on the Circuito Internazionale Napoli in Sarno (Italy), but the best of the opening round of the WSK Super Master Series is yet to come. Each one of the four categories taking part in the event has got two Prefinals and a Final on schedule tomorrow. These races will award the first points of the season: at the end of the weekend, the WSK Super Master Series will have its first official standings. All the 210 drivers here in Sarno are doing their best in order to score as many points as possible before the two other rounds of the Series: the second one scheduled on next April 13th in Castelletto di Branduzzo and the final round of Muro Leccese on April 27th. Here are the results of today’s races and tomorrow’s starting grids.

Camponeschi’s treble in KZ2
Flavio Camponeschi (Tony Kart-Vortex-Bridgestone), after the heats, seems to be the driver to beat in KZ2. The Italian driver from Rome has been in peak form since the beginning of the season and, today, he won all the three races he took part in. He will be the pole-sitter in Prefinal A, while Marco Ardigò, his teammate, achieved the same result for the Prefinal B thanks to two victories. Winning the Final will be tough for everybody as there are many drivers who can aim at success and that fill the slots of the top positions on the starting grids of the two Prefinals: next to Camponeschi there is the French Arnaud Kozlinski (Intrepid-TM-Bridgestone), while the second row is occupied by the English Ben Hanley (Art GP-TM-Bridgestone) and the Italian Riccardo Negro (Top Kart-TM-Bridgestone). The Belgian Rick Dreezen (Zanardi-Parilla-Bridgestone) will start by Ardigò’s side, while the two Italian drivers Paolo De Conto (Birel-TM-Bridgestone) and Felice Tiene (CRG-Maxter-Bridgestone) will start from the second row. They are all big names of international karting, but also the other 20 drivers on the starting grid are eager to battle for victory.

Many drivers aiming at victory in KFJ
The KF Junior, after the heats, seem to be very uncertain. There are still two heats to be raced before we know the names of the two pole sitters of the Prefinals. Today, five different drivers won in the heats. The two British teammates Max Fewtrell and Enaam Ahmed (Fa Kart-Vortex-Vega), the American Devlin De Francesco (Tony Kart-Vortex Vega) won twice. The Italian Leonardo Lorandi (Tony Kart-TM-Vega) and the English Daniel Ticktum (Zanardi-Parilla-Vega) won a heat each.

Fusco wins in 60 Mini on his home circuit
Giuseppe Fusco (Lenzo Kart-LKE-Vega) feels at home and won both the heats of the 60 Mini he took part in. Thanks to this result, he will be the pole-sitter of the Prefinal A. He will have to keep at bay the Russian Ivan Grigorev (Hero-LKE-Vega), who will start next to him. Second row for the Italian Skeed (Top Kart-Parilla) and Leonardo Marseglia (Lenzo Kart-LKE). In the Prefinal B, pole position for the Italian Nicola Abrusci (Tony Kart-LKE-Vega), thanks to a victory and a second place in the heats. Next to him, the Malaysian Muizz Gafar (Hero-LKE-Vega), while the Norwegian Dennis Hauger (Hero-LKE) and the Italian Mattia Muller (Lenzo Kart-LKE) complete the second row.

Tomorrow’s races Live in streaming
From 10.40am, the live streaming on the official website www.wsk.it, which will air the Prefinals and the Finals. On Rai Sport 2, on Wednesday 26th at 07.30pm, the delayed broadcast of the Finals.