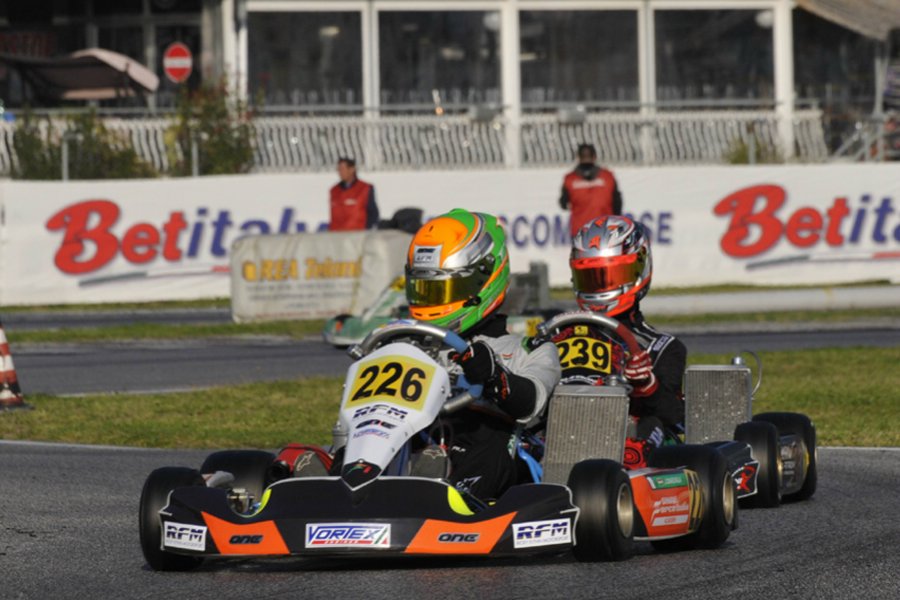 Two days of free practice and, then, the thrilling qualifying. The 210 scrutineered drivers taking part in the first round of the WSK Master Series will have to cope with timekeeping from today onward on the International Circuit Napoli of Sarno (Italy). Today’s times are the first records of the event promoted by WSK and scheduled on three rounds. Mount Vesuvius is the picturesque setting of the 1,699 metres of the track in Sarno: the first qualifying heats are taking place on this track tomorrow. The starting grids of tomorrow’s races are the results of today’s qualifying: let’s see who the pole-sitters are in each of the four categories.

Camponeschi attacks in KZ2
Flavio Camponeschi (Tony Kart-Vortex-Bridgestone) is eager to lay his hands on the KZ2. All the top drivers of the category are taking part in the race: here, the twenty-two year old driver from Rome, set the best time thanks to his 1’04”937, 125 milliseconds faster than his teammate, the world champion Marco Ardigò. Another Italian, Andrea Dalè (CRG-Maxter-Bridgestone) achieved the third position, just 164 milliseconds behind Camponeschi. Another world champion is in close pursue: the French Arnaud Kozlinski (Intrepid-TM-Bridgestone). Among the drivers who race on their home track, Felice Tiene from Naples (CRG-Maxter-Bridgestone) achieved the best performance thanks to his 11th time, just behind the English Ben Hanley (Art GP-TM). Hanley recently won the WSK Champions Cup: for them, and for all the 56 scrutineered drivers, tomorrow’s six heats are the ideal showcase before Sunday’s finals.

Daruvala on the run in KF
Asia is getting more and more important in motor-sport. The results of Sarno seem to confirm this trend: the Indian Jehan Daruvala (FA Kart-Vortex-Dunlop), achieved the best time in KF thanks to his 1’06”637. This means that there is another rival to beat for the Danish Nicklas Nielsen (Kosmic-Vortex-Vega), one of the most experienced drivers of the category. Nielsen placed second, for 123 milliseconds, just ahead of the Italian Alessio Lorandi (Tony Kart-TM-Dunlop) and the Polish Karol Basz (Tony Kart-Vortex-Dunlop), who finished with inverted position in the first two places of the WSK Champions Cup of two weeks ago: many drivers are seeking payback in a very uncertain category with 49 scrutineered entrants.

Brazil in pole position thanks to Raucci in KFJ
Giuliano Raucci (Energy-TM-Vega) set the best time in KFJ thanks to his 1’08”166. Brazil in pole position right on Ayrton Senna’s birthday, who was from São Paulo just like Raucci. Second position for the American Devlin Defrancesco, just 50 milliseconds slower; behind him the English Daniel Ticktum (Zanardi-Parilla-Vega) and Enaam Ahmed (FA Kart-Vortex-Vega). Ahmed, the winner of the WSK Champions Cup, will have to recover tomorrow. Also the Italian Remigio Garofano (Tony Kart-LKE-Vega), who placed eighth today, aims at victory.

Tomorrow qualifying for the 60 Mini
There are 41 entrants to the 60 Mini category in Sarno. Their leader is the Malaysian Muizz Abdul Gafar (Hero-LKE-Vega), the winner in this category of the recent WSK Champions Cup. For them, qualifying is scheduled tomorrow morning, immediately before the qualifying heats.

The races of Sarno on video
The media coverage provided by WSK Promotion has become standard for all the fans of motor-sport. On the official website wsk.it, they will be able to watch the event in live streaming from Sunday morning, 23rd March. The streaming starts with the Prefinals and will cover all the final phase of the race. Rai Sport 2 is ready to air the pre-recorded broadcast of the Finals on Wednesday 26th March at 07.30pm. On the same channel, the recap of the whole weekend in the special report on Friday 28th.