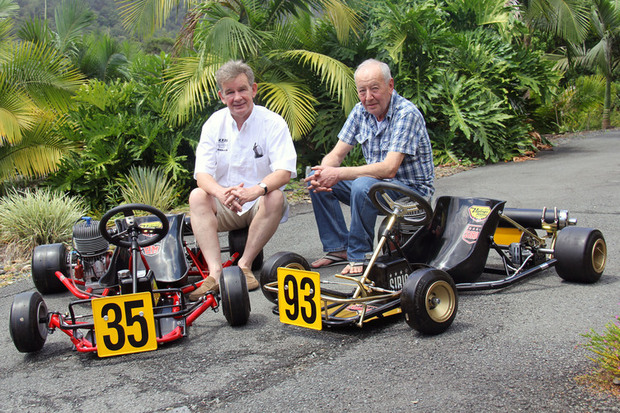 Two of the world’s most iconic men in the sport of karting, Angelo Parrilla and Harm Schuurman, have arrived in Queensland ahead of this weekend’s inaugural KTEQ Rentals Australian Vintage Kart Prix in Ipswich, Queensland.

Since landing in Brisbane earlier this week, the pair have spent time with long-time Australian kart racer Graham Powles on the Gold Coast while reminiscing about their previous racing exploits.

For Parrilla, who was the mentor of three-time World Formula 1 Champion Ayrton Senna during his karting career, this is his sixth visit to Australia – his first coming in 1976 while attending the Australian Championships in South Australia.

The Italian, who turns 66 today, is looking forward to being reunited with some old friends throughout this weekend’s event. He has already started the banter by sending a message to Australia’s most successful kart racer of all-time, John Pizarro, on one of his karts restored by Powles.

“I love Australia, the weather is fantastic and everyone involved in this weekend’s event has done an amazing job to have more than 200 vintage karts here,” said Parrilla.

“I’ve already left Mr Pizarro a note to remind him that he needed to go two one-hundreths of a second faster when he was driving in my team in Japan during 1982 at the Asia Pacific Championships. 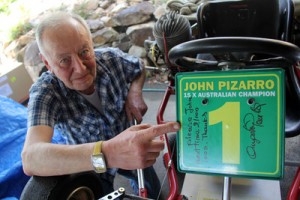 “Graham (Powles) has restored some amazing machines and it has been an honour to spend some time on the Gold Coast with him.

“I’ve had a relationship with the Australian people since 1973, I dealt with gentlemen such as Les Power, Peter Dell, Drew Price, Dean Harrison, Allan Brown, John Pizarro and Ken Mitchell along with many others here. For many years we sold 250 to 300 frames and engines here in Australia each year, it was a very good market for us.”

For Schuurman, who Parilla has previously noted as one of the top four drivers of his generation alongside Senna, Terry Fullerton and Mike Wilson, it will be his first Australian visit for a racing event since 1986. In his last trip, the Dutchman finished third in the International Castrol Grand Prix behind Alex Zanardi.

“The thing I’m looking forward to most this weekend is to see old friends with passion and excitement for karting,” said Schuurman.

“The restorations that Graham has done here in Australia is just amazing, I have a karting museum in Holland with a lot of restored karts that highlight the sport of karting from the very first kart through to what it is today. So I really appreciate the amount of work he has done to have 27 karts completely restored in immaculate condition, including his very first kart from 1959.

“I have some fantastic memories from Australia but I haven’t seen enough of it, maybe one day I will get to see more.”

The karts of the KTEQ Rentals Australian Vintage Kart Prix, ranging from early 1960 through to 1991, will take to the Ipswich Kart Circuit from tomorrow (Friday) morning at 9am with the action continuing across the weekend.

The Ipswich Kart Club is located on Champions Way, Willowbank.

Admission is $10 for adults while children under 16 gain free entry.