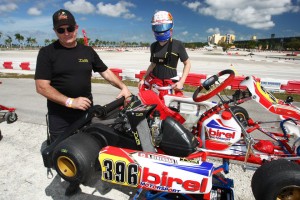 Terry Ventresca (left) is among the most well-respected tuners in the sport, and teamed with Brayden Seberras (right), is focused on assembling a small team of talented drivers who are ready to win. (Photo: VSR)

The popular FA Kart has found a home in the Canadian province of Ontario with the formation of Ventresca Seberras Racing (VSR).  The new operation is a partnership between veteran race tuner Terry Ventresca and his long-time driver Brayden Seberras, as each will bring their own strengths to the program.  The new squad will focus on the Eastern Canadian Karting Championships (ECKC) and the ASN Canadian National Championships at Mt.Tremblant, and will also provide technical support both on and off the track for FA Kart customers running at all the premier club tracks in the metropolitan Toronto region.  VSR is thrilled to be able to provide support for the top-notch FA Kart and OTK product lines, which they know will put their drivers in winning equipment.

Ventresca has countless years of championship experience with top karting squads such as First Kart North America and Racing Edge Motorsports and is a sought-after commodity south of the border, working for teams like Phil Giebler Racing, the U.S. operation run by the 2007 Indy 500 Rookie of the Year.  Ventresca Seberras Racing will be a professional program with a focus on extreme driver development, cutting edge technology and precise chassis set-up.  Ventresca will run the day-to-day operations and the race team, while Seberras will be in charge of team logistics, as well as the marketing, social media and online presence for VSR.

“We’re excited to put together our own program, using a product I know very well through all the tuning jobs I’ve had with big teams in the US,” commented Ventresca, a 30-year industry veteran and former eKartingNews.com Tuner of the Year. “I ‘ve been in discussion with OTK USA over the winter months to represent the FA Kart program here in Ontario and I had many ideas in my head of how to approach making it happen.  Now that we’ve dialed it in, this new program with Brayden is going to be great.  It’s just what I like, a small team of quality drivers with the sole target of winning races.”

VSR will stock and sell the full line-up of FA Karts for use in Rotax competition and is also working to put together a four-cycle package that will be ideal for the exploding Briggs LO206 program.  The team will base its trackside program from a 40’ fifth wheel trailer that will provide their drivers with the tools necessary to succeed. A driver data room and lounge will be used to its full effect, and the trailer will be stocked with OTK parts to service and support the team and any VSR customers.

Ventresca will continue to offer his engine building services through TVR Engines, which has a strong core of loyal customers, regardless of the chassis brand they run.  VSR is in talks with several drivers for the limited positions under the tent, but racers who are interested in becoming part of this focused effort are urged to contact Terry immediately to discuss winning opportunities. Ventresca can be reached at 519-830-3448 or via email at ventresca44@rogers.com or Info@GoTeamVSR.com .  A website is currently in the works and will be launched soon.

About Ventresca Seberras Racing:
VSR is a new race team and karting supply effort that will pair years of championship experience with cutting edge social media program and logistics.  Karting industry and tuning veteran Terry Ventresca has teamed with long-driver Brayden Seberras to become a dealer for FA Karts and OTK products, focusing on the Ontario karting scene and both the Eastern Canadian Karting Championships (ECKC) and the ASN Canadian National Championships.  Ventresca will manage the team, while Seberras will be in charge of team logistics, as well as the marketing, social media and online presence for VSR.  A new website will be launched soon.