Championship fights tightening up following a wet round two 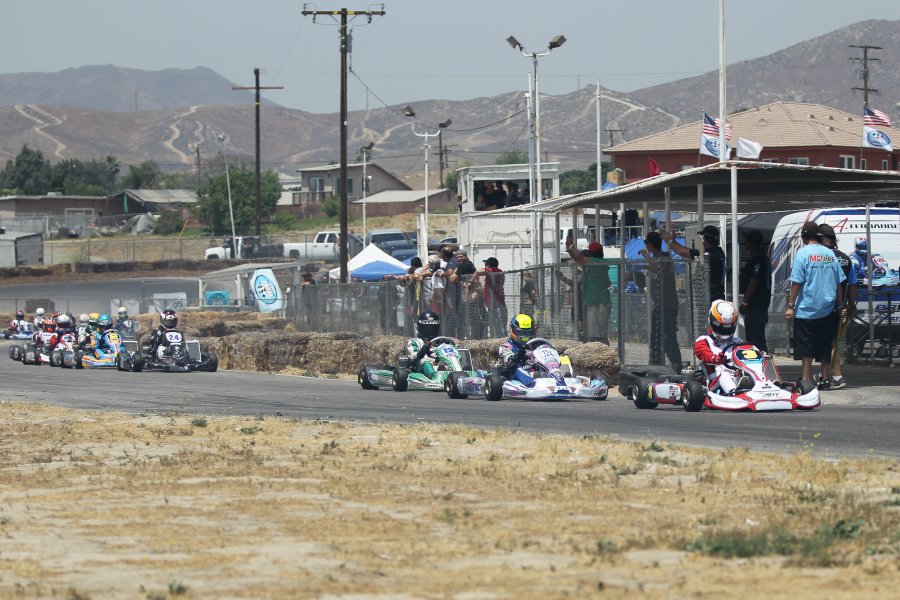 The California ProKart Challenge heads to the historic Adams Motorsports Park on March 28-29 for Round Three action (Photo: dromophotos.com)

The year is rolling right along as the Superkarts! USA California ProKart Challenge already finds itself near the halfway point of its 2014 season, bringing in wildly impressive entry numbers, with high level of quality racing and a higher level of enjoyment for all competitors. Coming up on March 28-29, the California PKC will host its third round of the six-race championship as the series heads to the historic AdamsMotorsportsPark. Located in Riverside, California, the track has been a fixture in California karting for many years. The racing at Adams is sure to be intense following a challenging wet weather race at Willow Springs earlier this month. The championship chases have been shaken up, and the true title contenders will surely stand out after next weekend.

Billy Musgrave is proving that he is one of the best shifter kart pilots in the country right now as he leads the Vemme Kart/Extreme Karting S1 Pro Stock Moto class, and he’s looking to repeat with his second S1 title. Musgrave has a streak of eight podium finishes throughout 2013 and into the opening two rounds of 2014 – including six wins and two runner-up finishes. Former Pro Tour champion Fritz Leesmann was the only driver to beat him in 2013, and Jimmy McNeil was the victor at Round One in Buttonwillow. Musgrave swept the day at Willow Springs and now leads the standings, with Matias Podboj trailing after his runner-up performance that weekend.

Reigning champion Jake Craig is setting himself up very well for a chance to repeat as he sits atop the point chase in the Mike Manning Karting TaG Senior category. Craig, who finished a close second behind Mason Marotta at Buttonwillow, took over the point lead with a victory at the Willow Springs event. Austin Elliott has been one step behind Craig so far in 2014, finishing in third at Buttonwillow and runner up at Round Two behind Craig. Occupying third heading into Round Three is veteran Matt Johnson, running in the top-five through two rounds of racing and has built a solid platform to challenge for the championship moving forward.

The unique ladder system that SKUSA has built for its Stock Moto drivers has been proven well in recent years, as it not only helps bring racers up through the ranks, but ensures high caliber racing at each and every level. The competition in the Phil Giebler Racing S2 Semi-Pro Stock Moto class has been a great training ground for what are the future stars in Superkarts! USA competition. Arizona racer Kolton Griffin has enjoyed a successful 2014 through the first two rounds. From doing very well at the club level, competing at the Los Angeles Karting Championship, Griffin leads the way in S2 at the California PKC. Griffin braved the wet conditions at Willow Springs to score the win and assume the point lead. Round One winner Jarred Campbell made his debut at Buttonwillow, scoring the victory in his graduation from the S5 Junior championship to S2, and sits second in the standings. Jake Craig is doing the double-duty, leading TaG Senior and making his S2 debut this year, racking up two podiums so far and in the title chase.

Darren Elliott has shown that despite being out of the seat of a kart for a number of years, the dirt biker turned karter hasn’t lost anything. Through two rounds of racing in the 2 Wild Karting S4 Master Stock Moto class, Elliott has been unstoppable. Back-to-back main event wins coupled with a pole position and three heat race wins has perched Elliott atop the point standings heading into Round Three. Behind Elliott in second place is Rob Logan, after standing on the podium in the first two rounds of racing. Reigning S4 champion Willy Musgrave sits third in the championship chase, still in the hunt to defend his crown.

Trey Brown has been the only driver to reach the checkered flag first in the opening rounds of the season in the Pure Karting TaG Cadet class. Despite recording zero heat race wins, Brown has stepped up come main event time, securing the wins at Buttonwillow and Willow Springs. Only 10 points separate him and Oliver Calvo, thanks to a second place run at Round One coupled with a third place finish at Willow Springs. Defending series champion Ryan Schartau won the Adams race last year, so he could use this weekend to help jump him back into the title chase.

Royal McKee is out to prove that consistency is key to a championship season, as he is the only point leader who has yet to win a race so far in 2014. McKee leads the way in the Buddy Rice Karting TaG Junior field with two top-four finishes. He has a pole position and a heat race win, along with a third place finish to his credit so far, and is looking for a victory this weekend at Adams. McKee holds a slim lead over Christian Brooks, who has won both main events this year in TaG Junior. Brooks will also contest the Sunshine Daydream Creations S5 Junior Stock Moto class, where he holds the point lead. Thus far, Brooks and Garret Dixon are the two main event winners, with Brooks embracing a 65 point advantage in the standings – and Roy Fulmer IV right there in third.

The Leading Edge Motorsports TaG Master category continues to belong to Billy Cleavelin. The last two championship trophies belong to him, as he has claimed the title in 2012 and 2013. Cleavelin swept the competition at Round One, but found himself chasing former Pro Tour champion Ethan Wilson in the rain at Willow Springs. Kevin Manning is doing his best to hang with Cleavelin as he finished on the podium at both rounds of racing so far in 2014. Chuck Gafrarar has made the trip out from the east coast for the first two rounds of racing, which has earned him the third spot in the points with hopes of besting Cleavelin as well.

Move in for Round Three of the California ProKart Challenge will start at 6:30am Friday morning due to a drifting event Adams is hosting Thursday night. Following the start of move in, registration at the track opens at 7:00am with the Friday test and tune beginning at 9:00am, running until 5:00pm.  There will be no charge for overnight camping at the track, space permitting, and there will also be no reserved pit spots – which will go by a first come-first serve basis. Complete race information can be found at the California PKC Event Page. The deadline to online register for the event is Wednesday, March 26 at midnight at the discounted price of $310 for entry and race tires.