With one points championship all but secure before last weekend’s finale round of the Formula Kart Productions Florida Winter Tour (FWT), Team Koene USA would head back to the Sunshine State to do battle at the Orlando Kart Center in Central Florida. With four drivers under the team tent, Roman DeAngelis and Jarrett Voorhies would be behind the wheel of TaG Junior chassis, while the d’Orlando brothers of Michael and Nicholas would enter the TaG Cadet ranks.

After Thursday and Friday’s unofficial test days, qualifying would take place for round five on Saturday morning. First on the schedule for Team Koene USA was the TaG Cadet class where Nicholas would turn a very quick lap and secure the fourth place starting position for his heat races. Unable to find clear track, Michael would be 23rd until the final circuit where he jumped up to ninth.

Heat one would see the brothers race a clean race and both finish inside the top-five. Michael quickly moved forward to assume the point for one lap before falling back to finish third. Nicholas would remain consistent in the top-five and cross the stripe in fifth. Heat two would see Michael again move forward, this time taking the victory and securing an outside front row starting position for the main event. Nicholas held station in his row two starting position to claim fourth and would line up directly behind his brother for the start of the final.

As three drivers broke away from the field, it was the elder of the d’Orlandos that would have his shot at the victory. Claiming the third position when the checkers flew, Michael would be elevated to second following post race penalties. Nicholas did what he needed to do to score a podium result in the end of the year championship as he crossed the line in fifth, his third top-five in the Vortex TaG Cadet class this season. 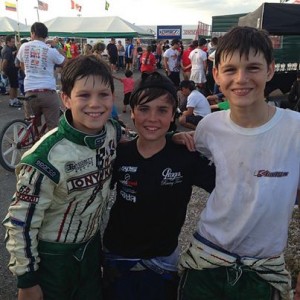 Sunday would see Nicholas d’Orlando start his heat races a little deeper in the field than on Saturday. After qualifying in the eighth position, the younger brother managed only a tenth place finish in heat two after failing to complete a lap in heat one. Michael, the newly crowned champion, would be involved in a first corner incident in heat one and drive from the tail of the field forward to finish 16th. Heat two would see another good result for the New York resident as he would cross the stripe in third.

The main event would not be kind to Nicholas as another first lap incident would force him to retire from the event. Michael would move forward from his sixth place starting spot to add his sixth podium in six races with a second place effort. With the series now complete, Michael d’Orlando was named the 2014 Vortex TaG Cadet champion with Nicholas joining him on the championship podium with enough points to finish P3.

Roman DeAngelis would qualify his Tony Kart in the 11th position while Jarrett Voorhies would turn the 18th quickest circuit of the session. Looking to move forward in the heat races, both drivers would falter slightly as competition became fierce on the track. DeAngelis would cross the stripe in 13th with Voorhies in 19th. Inverting the start order for heat two, Voorhies would start near the front of the field and hold steady throughout the race. Running in the top-three for the opening laps, the Texan eventually crossed the line in seventh. DeAngelis drove forward to finish tenth.

The start of the TaG Junior main event would be a bad one for Voorhies as first corner contact retired him from the event. DeAngelis would fly the Team Koene USA flag for the rest of the main event, as he was able to move his way into the top-ten. Finishing the final in eighth, the Canadian would look for more on Sunday.

DeAngelis would be one of the fastest drivers on the track on Sunday finishing his heats in fifth and first to start outside the front row for the day’s final. Voorhies would also continue to show his pace as a 13th result in heat one was improved on in heat two to finish seventh and set up a top-ten starting spot for the main event.

DeAngelis only made it 100 yards after the drop of the green flag in the final as an over anxious competitor drove over him on the entry to the first corner, causing a flat tire and eventually retiring from the event. Voorhies marched forward after the incidents in the first corner and ran in the top-five early. Falling back, Voorhies would end his FWT in the 11th position, a solid run for the Team Koene USA driver. DeAngelis would end the championship chase in eighth while Voorhies posted a very respectable 14th.