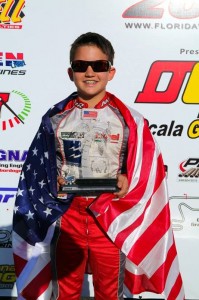 For the 2014 season, improvement will be the primary goal for Texas kart racer Nicholas Brueckner. The 12-year-old is entering only his third month as a Junior-level driver, and he continues to show the speed that you’d expect from a veteran of the class. This past weekend at the Florida Winter Tour ‘Formula Kart’ series finale at the OrlandoKartCenter, Brueckner secured his best result of the season with a stellar runner-up finish in the TaG Junior category. The MRP Motorsport/Birel America pilot advanced up the championship standings as a result, finishing just outside the top-five for the three-weekend program.  All in all, it was a very solid start to the new season and positions him to be among the top rookies in 2014.

Speed has not been an issue for Brueckner, and the Orlando weekend in TaG Junior was no different. Nick was among the fastest drivers in practice on Friday, and he very nearly scored the pole position for Round Five on Saturday. Posting a 53.217-second lap, Brueckner missed out on the top spot of the time sheets by 77 thousandths of a second. Nick started on the outside of row one, but was shuffled back to fifth on the opening circuit, something that often occurs at this level of competition. By the checkered flag, Brueckner had fought his way back into the second position. The field inverted for heat two, putting the TaG Junior rookie on the final row of the 22-driver field. Nick was able to pass half the drivers, crossing the line in 11th, but he was penalized back to last for aggressive driving. The results from the two heat races placed him 13th on the grid for the 18-lap feature race. Nick claimed nearly one position every lap as he fought his way back toward the front of the field. Brueckner’s MRP Motorsport/Birel America machine was moving forward, and armed with his Comet Racing Engines Leopard, he recorded the fast lap of the race in the process. Into the second position by lap 14, Brueckner secured his first runner-up and podium finish of the season.

Sunday was another day that featured Nick overcoming adversity as he completed the FWT Formula Kart series. Brueckner finished out the qualifying session in sixth, just two tenths off the pole position time, and ended up seventh in heat one after a hard-fought 12-lap battle. The craziness continued in heat two, with Brueckner coming from outside the top-15 on the grid due to the inverted start. A wild opening lap put Nick into the sixth position. From there, he fought his way to the lead by lap six. Brueckner went head-to-head with another driver for the win, with Nick crossing the line in first. Officials, however, deemed that his passing was ‘too aggressive’ and they removed him from the win and dropped him down to the last position. The penalty placed him 17th on the grid for the Final. Nick was up into the top-10 by the opening lap, and fought his way forward once again to run as high as fifth. Unfortunately, a mechanical issue arose which slowed his pace. Brueckner held on to finish ninth when the checkered flag waved.

“Reaching the podium this weekend is amazing. I can’t thank my family, MRP Motorsport/Birel America, Tim Lobaugh, and all my supporters enough for this moment,” stated Brueckner. “It’s upsetting that the officials felt I was too aggressive with some of my passes during the weekend, otherwise it could have been two podium finishes for us. We are going to move past the issues, and focus on a busy weekend end as we wrap up the Florida Winter Tour.”

Nick finished a solid sixth place in the championship standings for TaG Junior, but knowing that he had the ability to finish the season in the top-three bodes well for the upcoming season. Brueckner will close out the 2014 Florida Winter Tour this weekend, once again at the OrlandoKartCenter, contesting the Mini Max and Junior Max divisions. Nick is searching for his first top-10 finish in the Junior category, although four straight in Mini Max has him entering the weekend sitting seventh in the standings. Be sure to follow Nick’s progression throughout the weekend live on the Internet. Tune into the FWT Live broadcast on Friday for qualifying, with the Prefinal and Final action on Saturday and Sunday.