Kinsman & Co Make Light of Wind at Rotorua Rotax Round 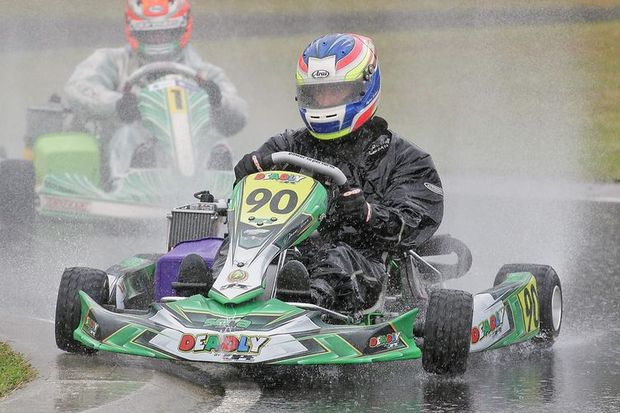 It was going to take more than Tropical Cyclone Lusi to stop – or even significantly slow down – Mathew Kinsman, Marcus Armstrong and Ryan Urban at the second round of this year’s Rotax Max Challenge New Zealand kart series near Rotorua over the weekend.

Persistent rain and strong winds made conditions on both days a stark contrast to the 30+ degrees C heat at the opening round of this year’s Schwarzkopf Professional-supported Challenge series in Palmerston North last month. But the results were virtually the same. 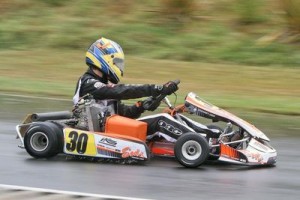 Mathew Kinsman made it two round wins in a row in the Logitech Rotax Max Light class at Rotorua
(Photo: Fast Company/Graham Hughes)

Kinsman, the defending class title holder, made no race of the Logitech Rotax Max Light class, qualifying on pole and winning both heats on Saturday as well as the Pre-Final and Final on Sunday, the latter from younger brother Daniel Kinsman (both from Auckland) and Daniel Connor from Helensville.

Also again impressive was Cambridge driver Andy Schofield who qualified fourth and got as high as second (setting the quickest race lap as he did so) in the second heat before finishing third in the Pre-Final and fourth in the Final.

Proving their prowess in the difficult conditions, meanwhile, were Auckland pair Reid Harker (fourth in the Final) and Nicholas Carpenter (sixth).

It was closer between the top two in Platinum Glass Rotax Max Heavy/Masters but round one winner Ryan Urban again emerged on top at Rotorua, albeit after two days of  constant pressure from reigning class New Zealand Sprint champion Zach Zaloum.

Zaloum, from Hastings, did beat Urban to the line in the second heat but Urban was resolute in the other races, making it two class wins from as many rounds with Zaloum (who had finished third at Palmerston North) second and former Rotax Max Challenge Great Britain class winner Tiffany Chittenden third.

Chittenden, now living in Christchurch, qualified seventh and claimed two fifth placings in the heats before finishing sixth in the Pre-Final then steadily working her way forward to end up third in the Final with Shane Hodgson fourth, Aarron Cunningham fifth and Ryan Bailey sixth. 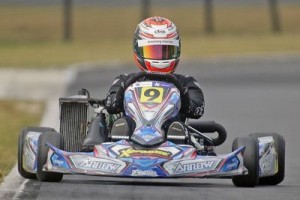 Finally, like Mathew Kinsman in Logitech Rotax Light, defending class title holder Marcus Armstrong from Christchurch made every post a winning one in Arai Rotax Junior.

Making up for the disappointment of throwing a chain in the Final at the first round, the 13-year-old was in imperious form, winning the first heat by eight seconds, the second by four-and-a-half (with last year’s class runner-up Dylan Drysdale second both times) then the Pre-Final by 11 seconds and the Final by just over 12 (in both cases from Jacob Cranston).

Also impressing in the wind and rain was Ethan Anderson of Rotorua, a standout drive in the Final seeing him work his way from 11th at the start to third place at the finish line – behind Armstrong and Cranston but in front of fellow young guns Trey Nairn and Taylor Harte.

Fourth place in the Final was enough, however, for Hawke’s Bay youngster Trey Nairn to claim first place in the class series points standings after the first two rounds, albeit by just one point from Harte with Cranston third and Armstrong now up to fourth.

The weekend’s Rotax Max Challenge New Zealand round was the second of six with KartSport Hamilton hosting the third at its AgriSea Raceway opposite Hamilton Airport over the May 17-18 weekend.