Ouimet, Fartuch and Fisher poised to take DR Kart to the front in growing race series

DRT Racing continues to contest the biggest races and most competitive series in the country, putting the DR Racing Kart at the front of those marquee events. In 2014, the DRT Racing team will support one of America’s growing touring programs – the United States Pro Kart Series (USPKS). The four-event championship series travels throughout the eastern half of the United States, holding its events at some of North America’s most well-known karting circuits. DRT is set on competing for race wins and championships in 2014, boasting a very talented three-driver line-up that will take to the track aboard the successful DR Racing Kart. Representing the DRT Racing team in a very stout Leopard 125 Pro class will be Arie Ouimet and Carter Fartuch, while Team Manager Brian Fisher will compete in the Parilla 125 Challenge. 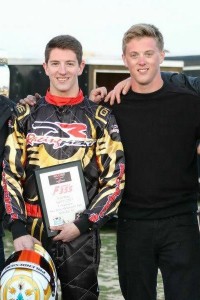 2014 will mark Ouimet’s first year competing in the USPKS after the series held its inaugural season in last year. The 23-year old has been karting since he was nine, and has the accomplishments of an obviously seasoned pilot. Competing and winning on some of karting’s biggest stages, Ouimet has proven that he can compete in any category. As the 2008 United States Rotax Grand National champion and a two-time US KF2 champion, Arie has the skills behind the wheel and incredible racecraft. Adding Ouimet’s name to the Leopard Pro category, teamed with DRT Racing and the DR Racing Kart, places him as an early championship contender in the headline class.

Ouimet has been working over the past few seasons with rising star Carter Fartuch. The Pennsylvania native has been positioned alongside DRT Racing brass over the off-season, working directly with DR Racing Kart’s Danilo Rossi, testing and preparing for a full assault in 2014. Fartuch has been a natural in the seat of his DR Kart. Carter honed his skills running indoor karts before moving to competition karts for the first time in 2010. Winning came easily to Fartuch at indoor races, and he is determined to find the same success by logging laps in countless club, regional, and national kart races. The 2013 F-Series Gearup Challenge F355 champion will also be making his first start in the USPKS at the series opener in April.

At the forefront of the success that DRT Racing and the DR Racing Kart is enjoying here in the United States is team manager Brian Fisher. Normally found at the front of the S4 Master Stock Moto fields or banging gears on the country’s fastest road racing circuits, the ‘Fish’ will add single-speed TaG racing to his on-track action as he contests the USPKS program. Fisher is a threat each and every time he hits the track, having racking up an estimated 100 feature wins over his career and earning 10 championships across several series. Most recently, Fisher was a double winner at the SKUSA SummerNationals and the vice-champion in the S4 Master Stock Moto category on the SKUSA Pro Tour. Brian also delivers the power to DRT Racing team karts, along with many other drivers across the country, as the accomplished engine builder has put Fisher Racing Engines among the nation’s top service centers. Fisher will complete the trio of DRT Racing team drivers who are making their first appearance with the USPKS, as he looks to bring home another championship in the fiercely competitive Parilla Challenge category. 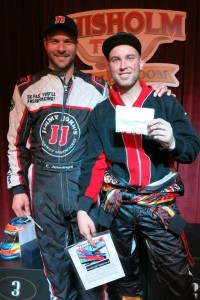 “The United States Pro Kart Series gained high praises last year, and we are excited to be part of the program in 2014,” stated DRT Racing owner Don Guilbeault. “We are familiar with all four facilities on the schedule, especially the opener at the GoPro Motorplex. During a weeklong test session last October, DR Racing Kart’s Danilo Rossi helped us test five new chassis models in preparation for the 2014 season. So far, we’ve gained strong results on the shifter kart side of our program, and now, we look to continue that success with the TaG models in the USPKS.”

The DRT Racing team’s most recent success came at the 2014 Lone Star Grand Prix in Lockhart, Texas on the opening weekend of March. DR Kart swept the Stock Honda categories, grabbing the top step of the podium thanks to Josh Lane and Chris Jennings. Lane was among the contenders during day one, in both Stock Honda Light and 125 Modified/ICC, running the same Stock Honda-powered DR Racing Kart. Lane drove like an ace in challenging wet conditions when the rain hit on Sunday. ‘Wild Thing’ posted the fastest laps of the race in the Open class, and lost the win on a controversial rule technicality and returned for the headline Stock Honda Light race to drive away to the victory. As a race winner, Lane was included in a drawing to win a trip to compete at the Granja Viana 500 kart race in Brazil, courtesy of MG Tires. His name was drawn out of a Texas-sized hat, as he will represent the LSGP at the international-star studded event. In the Stock Honda Heavy division, Fisher joined Jennings in the hunt for the win. The feature race was also rain-soaked, but Fisher and Jennings still pulled away from the field to make it an impressive DR Kart 1-2 up front.  Jennings – the reigning Texas ProKart Challenge S4 champion – was the man to beat though, as he made a last lap pass for the victory to steal the win, keeping the DR Kart domination of the class intact.

In addition to the USPKS program, DRT Racing is preparing another strong assault on the Superkarts! USA Pro Tour and other major events as well. DRT Racing has two locations along the East Coast, the original shop is located in Hudson, New Hampshire and the warehouse, engine development and race team in Bluff City, Tennessee. For more information, or to be part of the growing DR Racing Kart chassis dealer network, email info@drt-racing.com, phone 423-538-3838 or find them on Facebook.