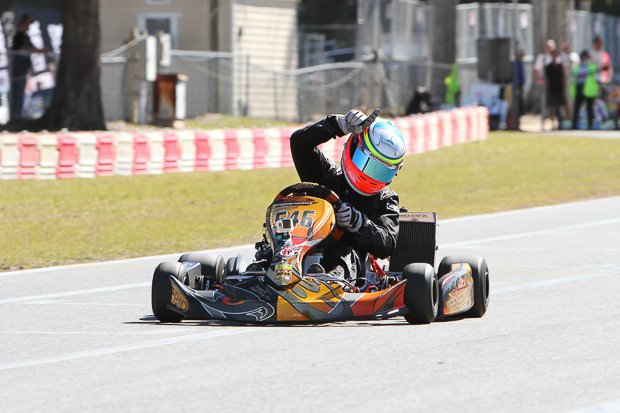 Schiavo won three of the four Masters features at the FWT Ocala event, matching his total from the opener in Homestead (Photo: Studio52.us)

Winning at the Florida Winter Tour is no easy task. A handful of drivers established a short list that have won a feature race in the double-weekend format – showcasing their skills in a TaG or shifterkart on one week, and followed it up with a Rotax win the next. Very rare do you see drivers competing in both the DD2 Masters and Masters Max category, but Luis Schiavo is no ordinary driver. Focus and dedicated to winning, the Venezuelan driver has been on fire during the opening two months of the year. At the FWT Rotax Max Challenge opener in Homestead, Schiavo won two Masters Max features and a DD2 Masters main event. The Goodwood Kartways/Intrepid driver backed it up with a similar performance, winning both features in DD2 Masters and a third straight in Masters Max at the February stop in Ocala. Thus far, Derek Wang and Scott Falcone – both 2013 Team USA members at the Rotax Grand Finals – are the only drivers to beat him in 2014. 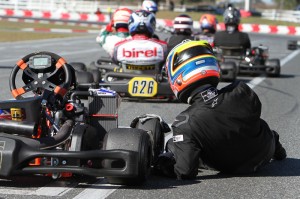 Luis examining his kart during the red flag period, as a broken spark plug ended his chance at a fourth victory (Photo: Studio52.us)

With two decades experience in karting and open-wheel racing, Schiavo is among the most experienced Masters drivers to compete in North America. One of Schiavo’s first experiences in the United States came at the FMK/FIA North American Karting Championships at the Charlotte Motor Speedway in 1998. He competed in the ultra-competitive Formula A division aboard a Rotax-powered Jolly kart. He placed inside the top-10 in both features, placing fifth in Final 2. In 2002, his attention turned to open-wheel cars, competing in the USF2000 program and moving into Star Mazda, winning the championship in 2003. Schiavo tested a Champ Car in 2005 and drove in three races of the Champ Car Atlantic Series in 2006 and 2008. Now, his attention is on winning at the Florida Winter Tour.

The weekend began with a stellar day of qualifying for Schiavo. The Venezuelan piloted his Goodwood Kartways’ Intrepid machine to the pole position in all four of the Masters sessions. Luis swept round three in the DD2 Masters category, winning both the Prefinal and Final. He led all 18 laps of the Prefinal for a 2.5-second win, and followed it up with near six-second margin in the 22-lap feature – posting the fast lap of the race. Schiavo doubled the gap in the Masters Max Prefinal, running to a near four-second win en preparation to a double-sweep on the day. Raul Costa had other ideas as he kept the pressure on throughout the 18-lap main event, but Schiavo proved too strong as he edged out his challenger at the finish line to earn a perfect score times two for round three.

Round four was Schiavo’s chance to win two more races, and make history as the only driver to win four races in a single Florida Winter Tour weekend. Luis was strong again in DD2 Masters, leading every lap in the Prefinal for a 4.1-second win. Schiavo brought the field slow to the green flag, and that may have hurt his ability to retain the top spot as Derek Wang jumped into the lead. The Venezuelan retook the position after three laps, and drove away to five-second victory, making it three straight in the class and a weekend sweep for the category. Luis carried a perfect season score into the Masters Max action on Sunday, starting with the pole position for the Prefinal. Schiavo led each circuit in the Prefinal with both Scott Falcone and Raul Costa trailing. As Luis led the field to the green flag, his kart just never really picked up speed. He pulled out of the line and fell way back in the pack. That moved Costa and Falcone to the lead until a red flag came out for an incident in turn one. Schiavo tried to analyze the engine issue as best as he could during the red flag period without toughing his kart. The karts began to roll again and he made a few laps trying to diagnose the issue, but was forced to pull in. It would be determined that a broken spark plug was the cause terrible misfire, costing Schiavo his fourth straight win in the series.

In total, Luis has six wins in eight feature races in the last two events of the Florida Winter Tour. He leads both championship chases, with a 95 point advantage in DD2 Masters over Wang, with Falcone trailing in Masters Max by 58 points. Next weekend at the OrlandoKartCenter for the Rotax Max Challenge finale will decide the 2014 championships, along with the Rotax Grand Finals ticket in the DD2 Masters class. 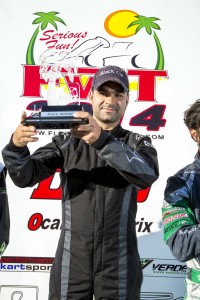 Chassis: Intrepid Raptor 2014
Engine/Engine Builder: Rotax / HRS Engines
Sponsors: Myself and the bank (LOL)
Series You Competed In: Florida Winter Tour
Years Karting: 20
How did you get started in karting? I was 8 years old when I went to Lonato, South Garda in Italy. My father was a big fan of races and took me to the rental karts in Lonato track. From there I was hooked and we started testing in my city track in Maracay, Venezuela.
What has been the high point in your racing career? Year 2005: I had won the Pro Star Mazda championship in 2003 and we tested in Champ Car with Dale Coyne. On my first day we were 2.5 seconds off the team’s best time, however we managed to beat Oriol Servia’s time by 3 tenths of a second on my second test day at Putnam Park Raceway.
What are your goals in racing? A few years ago (up to 2008) they were different, now it is just having fun being competitive.
In a few words, how would you describe your driving style? Aggressive and Smooth.
Funniest moment at the race track? It happened the year we won the Pro Mazda Championship. In the last race of the season with just one lap to go, I called my team owner Jon Mirachi of Racers Edge Motorsports on the radio and told him the car was misfiring like we were running out of fuel. He almost cried on the radio! “Luis whatever it takes but make it happen, pleaseee! Oh god no, not now!!! What do we do?? Luis go half throttle on the straight you have some margin over second place” He was in panic mode and I couldn’t stop laughing inside my helmet. His suffering was over when he saw me come down the straight for the checkered flag in Road Atlanta. He got me back after tech when he told me we were DQ for some tech issue. Then the pain was transferred to me for a few minutes until he laughed!!

What do you do when not at the track? Exercise, photographing and video editing
What are your goals outside of karting? Be the best father in the world :) and have a happy family
What type of street car do you drive? Nissan GTR
What type of street car would you like to drive? Ferrari F12
What are your pet peeves or things that irritate you? Stupid questions and grammar mistakes in any language. (I hope I didn’t make any…LOL)
What do you think could be done to improve the sport of karting? I believe the spec classes should be a bit more limited to equalize the field among drivers. Even though some classes are “spec” I still believe there are tweaks that people do to get an “unfair” advantage. I am not happy about that at all. I think the way it should be is that if you won on a weekend is because you were the best driver in that race and your kart was good enough to make it happen, or maybe lucky but never unfair to others.
What are your favorite aspects about the sport of karting? The rush, the adrenaline, the aggressiveness of the sport, not to mention the “off track” sharing with friends (Mechs, Teammates, team members)