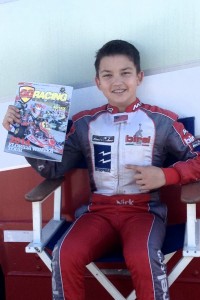 Nicholas Brueckner is settled into Orlando, Florida for the next two weeks in an effort to claim his best results thus far into the 2014 season, closing out the esteemed Florida Winter Tour program at the OrlandoKartCenter. The opening weekend will be the final two rounds of the Formula Kart series, taking place March 14-16, followed up by the international Rotax Max Challenge event on March 20-23. The first weekend of Nick’s back-to-back Florida trip puts Brueckner against the top drivers in the TaG Junior category, followed by him pulling double duty at the Rotax weekend where he will challenge the Mini Max and Junior Max divisions.

Nick will pull into the OrlandoKartCenter sitting seventh in the overall point standings in the TaG Junior category. A fifth place finish at the opening round in Homestead Miami set Brueckner up well for his first season in what has been a fiercely competitive class. Nick pieced together the middle part of the series with three impressive top-10 finishes through round two in Miami, and the halfway weekend at Ocala. Never finishing outside the top-10 through four rounds of racing in his first year in the Junior ranks certainly is an impressive feat that Nick looks to maintain and improve upon at the Formula Kart program finale in Orlando.

During the following weekend, Nick and his family will make their final trip of the year out to the East coast from their Texas home as Brueckner will pull double-duty in the Rotax Max Challenge weekend. After winning the Mini Max championship in 2013, Nick has been rock solid as he has again finished inside the top-10 each and every main event so far in 2014. Highlighted by a third place finish aboard his MRP Motorsport/Birel America entry at round two in Miami, Nick sits in the seventh position with enough room to move up the point standings in the final weekend. Brueckner has had a slightly rougher go of it in his second of two classes he competes in during Rotax weekends on the FWT.

The Junior Max division has put many hurdles in front of the young Brueckner, and he’s responded well each time. A lot of learning and growing as a driver for Nick during the first four rounds of the series, getting caught up in the middle of intensely close battles, and tight packs of karts has already done wonders in Brueckner’s maturation as a racer. Nick has shown the speed to be a threat in Junior Max competition, needing to just piece together one complete round to equate a solid finish. The young Texan is looking to outrun his share of bad luck and prove to everyone that he will be dangerous threat in the Junior ranks for the coming months and years.

Brueckner received some extraordinary exposure to the motorsports and karting world recently, as he was selected to appear on the February cover of the Go Racing Magazine. The California-based publication selected a photo taken by Ken Johnson of Studio52.us from the Florida Winter Tour Homestead Karting event during the Formula Kart weekend in January. Nick is piloting his MRP Motorsport/Birel America entry with Comet Racing Engines-powered IAME Parilla Leopard engine.

Be sure to follow Nick’s progression throughout the two weekends live on the Internet. Tune into the FWT Live broadcast of both weekends competing at the Florida Winter Tour.