Formula Kart Racing Championships to be decide this weekend in Orlando 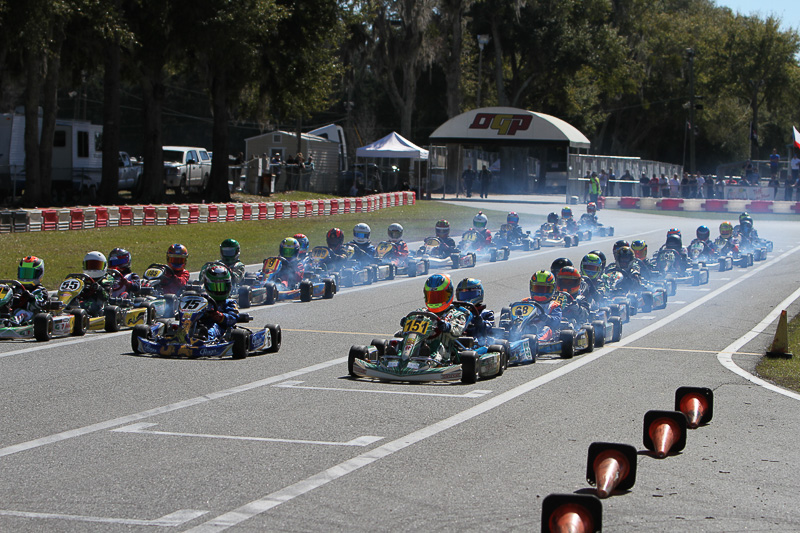 This weekend the competitors of Formula Kart Production’s Florida Winter Tour, presented by Ocala Gran Prix, converge on the OrlandoKartingCenter facility for the final two rounds of the 2014 FWT Formula Kart Racing Championship. With this being the championship weekend for the Formula Kart competitors, the level of intensity will be high.

The biggest increase in those numbers this year has come from a resurgence of the shifter kart classes, with a total of 41 drivers taking part. After starting out with 24 shifter competitors in Homestead, there were 29 shifter competitors in Ocala. Orlando looks to match or increase the Ocala turnout, so the future looks very bright for the 6-gear monsters.

On the other end of the performance spectrum another type of kart making a big move in 2014 is the Briggs LO206. The year kicked off with 11 Senior competitors in Homestead chasing over $3,600 in cash purses. In Orlando we’ll see that Senior number increase, and we’ll add the Junior and Masters LO206 classes, too. With the growth of this sealed, spec class throughout North America we could be watching the birth of the next mega-class. Representatives from Briggs and Stratton say they are selling the LO206 motors faster than they can make them.

However, once again the biggest classes at the Florida Winter Tour Formula Kart Racing Championship are the TaG classes. They are known worldwide for their competitive fields and exceptional parity. In just the first two events of 2014 we’ve seen over 100 unique competitors in the four FWT TaG classes and that number looks to grow in Orlando. 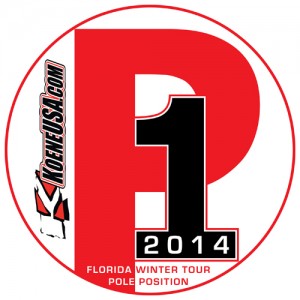 Fantastic Awards
The Florida Winter Tour is known for having top notch awards and that trend continues in 2014. Drivers with an eye on a car racing future are vying for $23,000 in Skip Barber Racing Awards*. Daniel Formal (USA), who won the top award in 2013, is back in the mix to win it again this year. However, stiff competition from Jamaica’s Collin Daley jr. and American Michael d’Orlando means that nothing will be settled until the last checkered flag is thrown.

Also back for 2014 is the enormously popular award of a seat in the Granja 500 provided by MG Tires*. Ask anyone who’s ever been to the Granja, like 2013 winner George Moss (USA) and they will tell you it’s an experience of a lifetime.

In addition to the aforementioned awards, both IAME* and VORTEX* continue to offer factory support for FWT competitors. In IAME’s case, competitors in both TaG Junior and Senior will be eligible for awards valued up to $10,000 when they use either the Parilla Leopard or X-30 engine. Likewise, VORTEX is providing support with affordable engine leases on the exciting RoK shifter package, and awarding the top finishing driver in Open Shifter using a RoK engine an entry and all consumables at the 2014 RoK Cup USA Championship Finals.

One thread we’ve been following throughout the 2014 FWT season are the special awards for fast  qualifiers via the P1 Pole Position Awards provided by Koene USA*. We’ll see 20 P1 awards handed out during the Orlando FK rounds.

Also to be awarded in Orlando will be the Dan Wheldon/FWT karting Ambassador Award*. Although the award won’t be presented until the weekend following the Formula Kart Championship, we want to encourage everyone to submit your nominations for this special award to live@floridawintertour.com. The deadline for nominations is Friday March 21.

The prestigious FWT Manufacturers Cup and Nations Cup Championships continue in 2014 and both are garnering the respect they deserve. On the manufacturers side Tony Kart is looking to defend their championship over CRG and Birel. Perhaps most impressive in this title chase is Ariel Castro’s AM chassis, challenging the top three from the fourth position. On the Nations Cup front, The United States of America continues their dominance over Canada while Venezuela, Colombia and Brazil are locked in a tight battle for third. 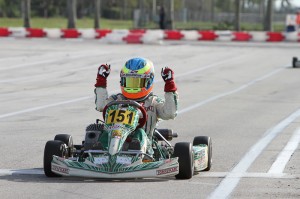 Drivers to Watch
After a clean sweep of every final so far in AM Racing’s Formula TaG Cadet class Michael d’Orlando is looking to complete the “perfect season” by taking the last two finals wins in 2014. Keeping Michael company in the quest for the perfect season is Ariel Castro, who has been on top of every Decal Zone Formula Masters Shifter podium through Homestead and Ocala.

In Russell Karting Specialties Formula TaG Senior Dan Roeper (USA) looks to have a nice lead over second, but with point drops and a third of the season left, the championship is far from settled. Breathing down Dan’s neck are Zachery Claman DeMelo (Canada), Mike Giessen (USA) and Daniel Formal. This class, as always, will be one to watch throughout the weekend.

Shifter, and conversely Briggs Senior ace Collin Daley jr. has been a dominant force in both Bordogna Racing Engines Formula Open Shifter and Top Kart USA Briggs LO206 Senior and looks set to take the Championships in both classes.

Joining the ranks of the shifter kart pilots this weekend in International Racing USAs Stock Moto category will be CRG Factory pilot Jordon Lennox Lamb (UK). Jordon has been a front runner during the FWT Rotax weekends, has raced KZ successfully in Europe, and now will see how he stacks up against FWT Stock Moto points leader Matthew DiLeo (Canada) and a group of FWT newcomers battling for a top finish.

Watch All The Action Live Online!
FWT Live!, Formula Kart Production’s ground breaking live streaming broadcast coverage, continues in 2014 and will provide viewers with streaming video, live timing and audience interactivity. If you’ve never seen an FWT Live! broadcast, be sure to log on beginning Saturday March 15th to witness the action from the Orlando Kart Center facility. To interact with the FWT Live! crew or to send shout outs to your favorite drivers, send emails to the announcers at live@floridawintertour.com.

More information on the FWT awards programs can be found at the following links: