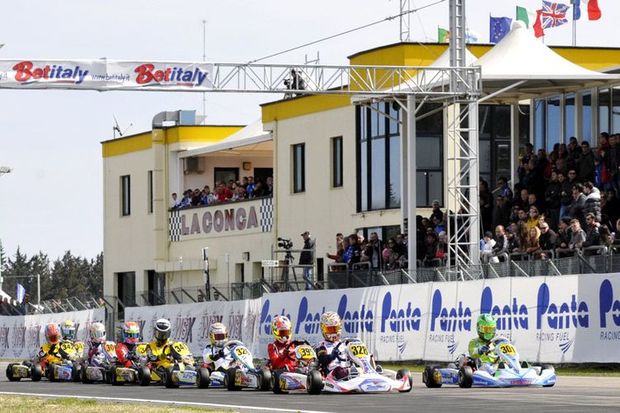 It was a good start for the WSK season at La Conca with the Champions Cup
(Photo: Press.net Images)

The WSK karting presents its first winners of 2014 on Rai Sport 2.

The winners list of the 2014 WSK Promotion season has got its first entries after the season opener event: the WSK Champions Cup. The short and thrilling series, with just two rounds on schedule both hosted by the International Circuit La Conca in Muro Leccese (Lecce, Italy), was only decided after a final sprint. Fans will be able to enjoy again the thrill of the Finals of the four categories on Rai Sport 2, on 12th March at 06.00pm. 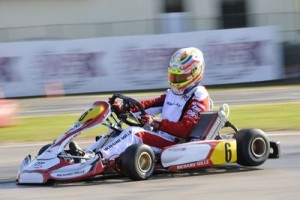 The top international drivers put on a performance, which kept the public on the edge of their chairs in KZ2, where the final standings remained uncertain until the end despite Ben Hanley (Art GP-TM-Bridgestone) had been dominating the Series since the first round. Hanley had finished the first round with a comfortable lead over his opponents. He was the winner of the 2nd March Final, but at the second round the Belgian Rick Dreezen (Zanardi-Parilla-Bridgestone) closed the gap after winning the Prefinal and, in the Final, Dreezen even entered the battle for the victory of the Series, a battle which had many drivers involved. The Italian Flavio Camponeschi (Tony Kart-Vortex-Bridgestone), thanks to the points scored with his second place behind the unreachable Dutch Jorrit Pex (CRG-TM-Bridgestone), seemed to be the most dangerous rival for Hanley. The latter, in fact, dropped back to sixth from third during an appalling last lap. Despite the poor result, the points scored were enough for Hanley, who secured his victory of the WSK Champions Cup, even though just 8 points ahead of Camponeschi. Great performance for Pex, boosted to third position of the final standings by his victory in the Final. Good performance also for Dreezen, fourth ahead of his fellow countryman Jonathan Thonon (Praga-Parilla-Bridgestone) and of the French Iglesias (Lenzo Kart-LKE-Bridgestone), both very consistent in both the rounds. 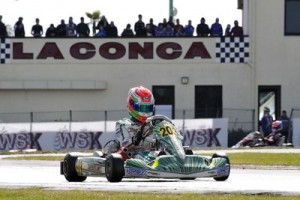 Basz dominates and wins in KF.

The Italian Alessio Lorandi (Tony Kart-TM-Dunlop) and the Polish Karol Basz (Tony Kart-Vortex-Dunlop) dominated alternatively the KF races of the two weekends. Basz, eventually, had the upper hand thanks to the results achieved in the first round; Lorandi did not manage to completely close the gap in the second round and had to be content with a second position. Last Sunday he only managed to score a third position in the Final, a result which prevented him from winning the trophy. Basz kept the leadership, just 10 points ahead of the Italian. Good performances also for the British Callum Ilott (Zanardi-Parilla-Dunlop), who placed third, and the French Julien Darras (Kosmic-Vortex-Dunlop) one of the new top drivers of the category. Fourth and fifth place for the two Russian driver’s Egor Stupenkiv (Energy-TM-Dunlop) and Nikita Mazepin (Tony Kart-Vortex-Dunlop), who achieved remarkable results.

Ahmed wins by a hair’s breadth in KF Junior. 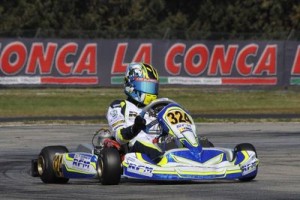 Only three points separate the two English drivers Enaam Ahmed and Max Fewtrell (both on FA Kart-Vortex-Vega), the winner and the runner-up of the KF Junior. The two teammates won alternatively in the final phase of the two weekends, and Fewtrell’s flawless victory in the second round Finals (which awarded more points of the first round Final) put in jeopardy Ahmed’s victory of the Series. Ahmend, in fact, did not manage to keep the pace of his teammate and dropped back to the second half of the pack right at the start of the last race, where he filled the slot of the front row next to Fewtrell. Ahmed, anyway, managed to achieve a great recovery and to finish 9th: that’s what the Brit with Asian origins needed to win the Series, even though with a very narrow gap. Remarkable results also for the British Daniel Ticktum (Zanardi-Parilla-Vega), third both on the podium of Muro Leccese and in the final standings of the Series. Also Mick Junior seemed improving fast and finished fourth in the final ranking. Another good surprise is the Italian Lorenzo Travisanutto (PCR-TM-Vega), the runner-up of the Final, a result which boosted him to the fifth place, just ahead of the Belgian Benjamin Lessennes (Kosmic-Parilla-Vega), also very positive throughout the Series.

Gafar overtakes all his opponents in the 60 Mini.

In the 60 Mini, the Italian Giuseppe Fusco (Lenzo Kart-LKE-Vega) could not take part in the battle for the victory of the Series for a issue he had in one of the qualifying heats. Since then, he could not but try to recover some positions. It was a shame not to have him in the battle of the Final together with three other extraordinary drivers: the Malaysian Muizz Gafar, the Russian Bogdan Fetisov (both on Hero-LKE-Vega) and the Turkish Mehmet Dalkiran (Top Kart-Parilla-Vega). The three drivers challenged each other in the heated Final of the category reserved to drivers aged 10. Eventually the winner was Gafar, and the tiny Asian driver scored the points he needed to take the leadership off the hands of Fusco. Fusco, however, was outstanding and managed to grab the fourth place of the Final; a result which allowed him to be the runner-up of the Series just ahead of Fetisov. Thanks to his better results in the first round, the Spanish David Vidales (FA Kart-LKE-Vega) finished fourth ahead of the surprising Canadian Antonio Serravalle (Tony Kart-LKE-Vega), who was always among the top drivers in the second round. Skeed (Top Kart-Parilla-Vega), on the other hand, was a bit disappointed: he deserved to occupy the top positions but only achieved the sixth position and did not have the chance to fight for the victory of last Sunday’s Final.