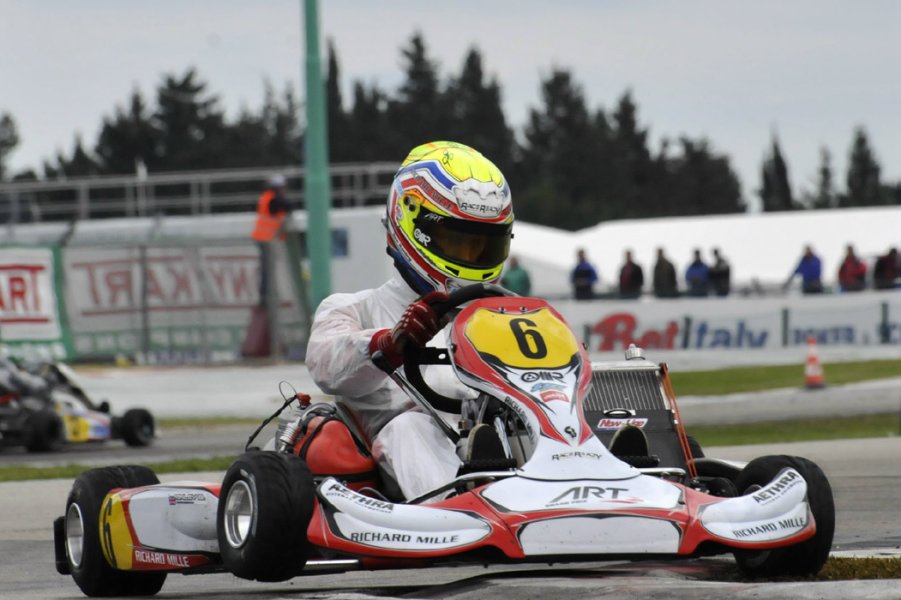 There are no pauses in the race towards the WSK Champions Cup. After the first round which took place last week and had a huge success, international karting meets once again at the facility of Muro Leccese (Italy) for the second and decisive round of the opening event of the 2014 WSK season. There was qualifying on schedule today at the International Circuit La Conca, the first phase before the long series of tomorrow’s heats. Today drivers had to look after their karts and drive carefully on the wet surface of the track and times were remarkably higher than those set during last week’s qualifying. Drivers and teams aimed at achieving the best starting position for the decisive races: the Prefinals and the Finals of Sunday 9th March. There are still many points available for the 185 entrants coming from 30 different countries and from 4 continents, all eager to succeed.

Janker is the surprise and sets the fastest time in KF
The weather today levelled the performance of the teams in KF. The German Hannes Janker (Zanardi-Parilla-Dunlop) was the fastest with 1’07”778. The driver from Röthenbach, who scored only one point in the first round, was the surprise of the day together with the British Ollie Norris (FA-Vortex-Dunlop), the Danish Kevin Rossel (Tony Kart-TM-Dunlop) and the Londoner Lando Norris (FA Kart-Vortex-Dunlop); they placed in this order at the end of the qualifying session. In the current standings they are all in pursuit of the leader, the Italian Alessio Lorandi (Tony Kart-TM-Dunlop), who placed 9th today.

Hanley aims at his second win in KZ2
The English Ben Hanley (Art GP-TM-Bridgestone), the leader of the KZ2, confirmed his last week’s excellent performance and set the fastest time in 1’02”577. Behind him the Belgian Rick Dreezen (Zanardi-Parilla-Bridgestone), who is eager to recover from the 9th position. Also the Italian Sauro Cesetti (Top Kart-TM-Bridgestone) put in a good performance and set the third time. Among the drivers who are trying to recover there is also the Italian Marco Ardigò (Tony Kart-Vortex-Bridgestone), who placed fourth today.

Ticktum counterattacks  in KF Junior
Enaam Ahmed (FA Kart-Vortex-Vega), last Sunday’s winner, clocked a time which placed him in 12th position, 2”271 slower than the pole-sitter, Daniel Ticktum (Zanardi-Parilla-Vega). Ticktum, fellow countryman of the leader, is eager to close the gap with Ahmed, who is 30 points  ahead:  he  stopped  the  clock  at  1’11”644  and clinched the pole. Also the American Logan Sargeant, who has to recover from the bottom of the ranking, and the German Mick Junior (both on Tony Kart-Vortex-Vega), who is third in the current ranking just behind Ticktum, seem to stand a good chance after setting the second and the third time. Behind them the Italian Leonardo Lorandi (Tony Kart-TM-Vega). The latter is also trying to redeem himself after the pile-up he got involved into at the start of the Prefinal. The American drivers won the first two qualifying heats of the weekend, scheduled today at the end of the qualifying session. The winners were Sargeant and Devlin Defrancesco (Tony Kart-Vortex-Vega).

The 60 Mini is ready to start
The category reserved to drivers aged 10 had free practice on schedule today. Their qualifying session starts tomorrow morning. In the driest session of the day, the best performance was achieved by the Polish Aleksander Bardas (Top Kart-Lenzo-Vega) with 57”040.

La Conca in live streaming
Before the delayed broadcast on Rai Sport on Wednesday 12th March at 06.00pm, all the images of the WSK Promotion event are available on www.wsk.it. The official website will broadcast the event on Sunday 9th March from the Prefinals.