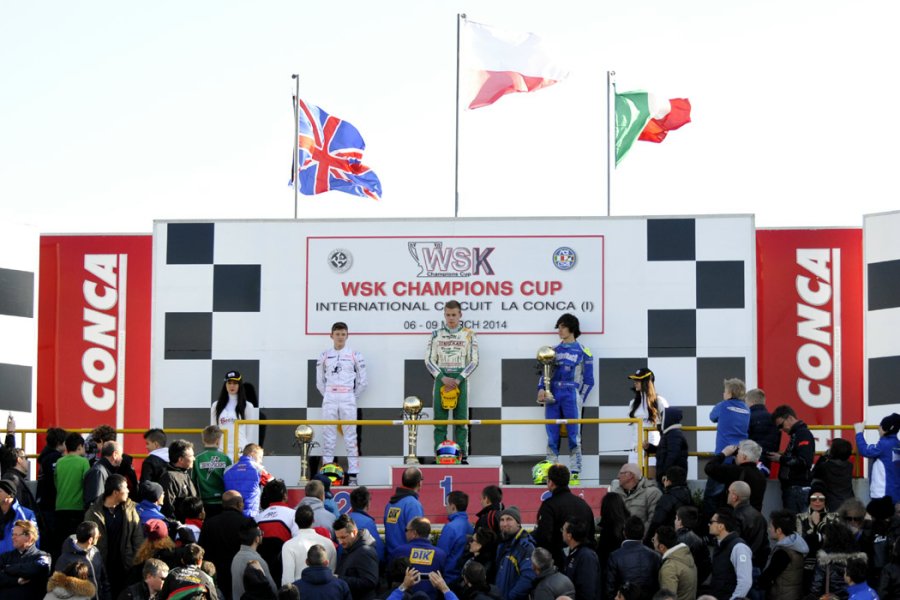 It’s all happened within a week: the first victories of a 2014 WSK event have been awarded at La Conca after the second and decisive round of the WSK Champions Cup of karting. The first round took place just a week ago, always on the circuit of Muro Leccese; today’s race did not finish as everybody expected after the first round, and uncertainty ruled until the end. Even the Finals which took place this afternoon gave results which were not consistent with what we saw during the heats. Of course, this uncertainty made the race as gripping as ever for the numerous public who was able to see the drivers challenging each other either sitting on the crowded stand along the track or in live streaming on the official website wsk.it. 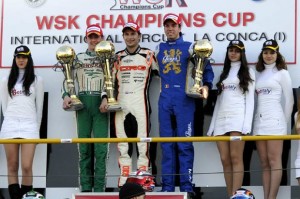 Pex is the surprise in KZ2
After a rather hard qualifying session, Jorrit Pex (CRG-TM-Bridgestone) had to fight a lot to close the gap in the heats. The Dutch driver had finally the upper hand in a rather heated Final, where the British Ben Hanley (Art GP-TM-Bridgestone), the leader of the standings, tried hard to attack the leading positions. The Belgian Rick Dreezen (Zanardi-Parilla-Bridgestone), winner of the Prefinal, and the French Jeremy Iglesias (Lenzo Kart-LKE-Bridgestone), who gained an early lead in the final, could not fend off Pex’s attacks. Pex managed to pass them and to gain ground over the rest of the pack. Behind him, the Italian Flavio Camponeschi (Tony Kart-Vortex-Bridgestone) resisted in 2nd position, despite Hanley’s attacks. The latter, during the battle of the last laps, lost several positions and the Belgian Jonathan Thonon (Praga-Parilla-Bridgestone) took advantage of it and scored a podium position. Hanley dropped back to 6th, but that was enough to secure his victory of the WSK Champions Cup.

Basz’s hat-trick in the KF Final
The battle in the KF Final had two protagonists: the English Callum Ilott (Zanardi-Parilla-Dunlop) and the Polish Karol Basz (Tony Kart-Vortex-Dunlop). The former aimed at inverting – in the Final – the positions of the Pre-final B, where he was the runner-up and Basz was the winner. The latter tried to take over Alessio Lorandi’s (Tony Kart-TM-Dunlop) leadership of the standings. Lorandi, in the same Pre-final, finished only third. After the first two drivers exchanged positions at the beginning of the race, the Final was eventually won by Basz, who gained the leadership during the last laps and crossed the finishing line ahead of Ilot. The Italian Lorandi, on the other hand, never managed to close the gap with the two leaders and the WSK Champions Cup went to Basz. 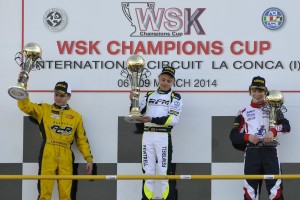 Fewtrell beats everybody in KF Junior
Max Fewtrell (FA Kart-Vortex-Vega) won the KF Junior final beating his fellow countryman teammate and leader of the standings Enaam Ahmed. The latter, after losing ground at the start, had to fight hard to close the gap and to keep the head of the category. Behind Fewtrell, who had pulled away from the rest of the pack, the second position was conquered by the Italian Lorenzo Travisanutto (PCR-TM-Vega). He managed to keep it until the end of the race, preceding the British Daniel Ticktum (Zanardi-Parilla-Vega), third. However, none of them managed to get on top of the standings: Ahmed kept the leadership thanks to the points he scored and he is the winner of the final ranking.

Gafar wins in the 60 Mini
Muizz Gafar (Hero-LKE-Vega) beat the odds and won the Final and the Cup for the 60 Mini category. He was the runner-up of the Prefinal B and, in the Final, the Malaysian conquered the leadership of the race passing the Russian Bogdan Fetisov (Hero-LKE-Vega) after few laps. Gafar pulled away, as Fetisov had to fend off the attacks of the Turkish Mehmet Dalkiran (Top Kart-Parilla-Vega). Dalkiran tried to pass Fetisov until the end of the race, but without success. The Canadian Antonio Serravalle (Tony Kart-LKE-Vega), who had dominated the heats, was slowed down during the first laps and managed to finish fifth.

The Finals on TV
On Wednesday 12 March, from 06:00pm, the thrilling Finals on Rai Sport 2.