The CRG-USA team has established itself as one of the premier teams in the national karting scene. Results the operation has posted in the short two month season thus far in 2014 speaks volume, as does the vast amount of traveling the team has already logged. This past weekend (March 1-2), the CRG importer to the United States supported 15 drivers, including two of their dealer teams, at the 2014 Lone Star Grand Prix. Upon arriving in Lockhart, Texas, the CRG race team settled in on a city block, filling the tents with karters and their families ready for a fun weekend at the races. The CRG drivers posted great results in Texas despite the challenging weather conditions throughout the two days.

“The Lone Star Grand Prix was an incredible event!” CRG-USA owner Stacey Cook said upon arriving back home in Colorado, “This has become more than just an average race event. I am very proud of our team and our Texas dealers, RPM Racekarts and Core Karting. They both have done an incredible job of promoting and supporting CRG in the LoneStarState. CRG was well represented.”

Jerry Rhodes and his family’s team, RPM Racekarts – a dealer for CRG-USA – joined forces for a second time at the LSGP this year. Switching from Stock Honda Light, this year Rhodes contested the 125 Modified/ICC class. Bolted to Jerry’s CRG Road Rebel Braga was a wickedly fast and powerful TM K9B ICC motor prepared by CRG-USA partner, Darcy Decoste Racing Engines. The Texas-native reached back on his previous knowledge of the downtown layout allowing him a leg up on most of his competition beginning in qualifying. Rhodes slotted his CRG fourth quickest of the 18 karts that took a shot at qualifying. After slipping back to sixth in the prefinal, the Texan showed that he can be fast in the dry and the wet. As his competition slid into the haybales and barriers around him, Rhodes avoided the mess and drove to an impressive second place finish on Sunday. 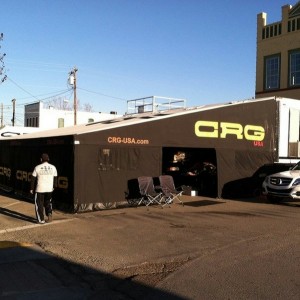 CRG-USA and its dealers filled up a city block in Lockhart, Texas at the Lone Star Grand Prix

Sabré Cook challenged the one-off street race for the second time this past weekend. The Colorado-native recorded her second top-five finish at the LSGP in the rain on Sunday. Qualifying in the top-10, Cook stayed on the back bumper of her CRG-USA teammate – Californian Jimmy McNeil – as she drove to a seventh place finish in the prefinal. Sunday brought on the rain and leaning on her vast experience of over 10 years in racing, along with the support of her CRG-USA tuners and coaches, Cook gained ground in the slick feature race leaving Texas with a podium finish in the fifth position. Not far behind Sabré was fellow Colorado racer Tase Flores. Moving up from his 15th place run in the prefinal, Tase looked great in the rain as he scored a top-10 in the seventh position. Thanks to the efforts of Jimmy McNeil and Myles Marlot, CRG-USA put four of its drivers inside the top-10 in a very fast and talented Stock Honda Light field.

Robert Marks and Darrell Tunnell joined the CRG-USA team as they made the venture out from Visalia, California. National top-five S4 Masters Stock Moto driver, Robert Marks had a successful weekend in Texas running top-10 all weekend in Stock Honda Heavy. Following qualifying in the 10th position, the California Kid drove to an eighth place run in the prefinal. Debriefing with CRG-USA teammates and tuners led to Marks making the right changes for the rain soaked main event where he recorded an impressive sixth place finish. Mark’s friend and teammate Darrell Tunnel drove a superb main event, where he gained five spots from his 15th place run in the prefinal to complete his first LSGP with a top-10 finish. Tunnell’s performance on the streets of Lockhart helped the Masters driver in preparation future street races this season, including the Modesto Grand Prix, and of course the SKUSA SuperNationals.

CRG-USA supported two of its youngest drivers in Lockhart competing in the Stock Honda Junior field. Texan Hannah Williams and Colorado’s Evan Roshak both returned to the event after competing in 2013. Roshak kicked things off with a great lap in qualifying, which would earn him the third starting spot in the prefinal. Williams was not far behind as she ran the fifth quickest lap of Saturday’s qualifier. The prefinal proved just how far Roshak has come as a driver since joining CRG-USA as the young shifter pilot fended off challenges and maintained the third position heading into the main event. Combating a rib injury sustained during Saturday’s racing along with the rain, Roshak was faced with plenty of challenges Sunday. Evan held tough and brought home a top-10 for CRG-USA and a weekends worth of experience. Hannah Williams continued her up and down weekend as she fell to 10th in the prefinal but had a great charge in the feature race, where she secured a fifth place finish and a podium to end her weekend on a high note. 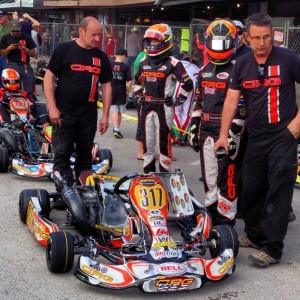 CRG karts lined up on the grid at the Lone Star Grand Prix, ready to take to the track

Two drivers contested the TaG Masters field wearing CRG-USA colors. From RPM Racekarts, Michael Rhodes Jr. and arrive-and-drive pilot Kurt Fisher. Both drivers started off the weekend searching for speed, but ended at the front of the field. Rhodes qualified his CRG 15th on Saturday with Fisher two spots back in 17th. Fisher would gain ground in the prefinal, while Rhodes maintained his 15th position. Sunday’s thunderstorm seemed to fit both drivers driving styles quite well. After setting their karts up for the wet conditions, Rhodes drove all the way up from 15th on the grid to finish eighth while Fisher put his CRG-USA entry on the podium thanks to an incredible 12-position gain going from 16th to fourth.

CRG-USA was scheduled leave the LSGP and head north to Dallas where they were set to conduct a two-day test session at the Dallas Karting Complex in preparation for the SKUSA SpringNationals this May. Freezing conditions forced the team to call off the test and return home to Colorado. Next up for CRG-USA is the final round of the Rotax Challenge of the Americas, set to take place in Sonoma, California on April 4-6. The team is in pursuit of several championships, including Sabre Cook’s bid to at the DD2 class championship.