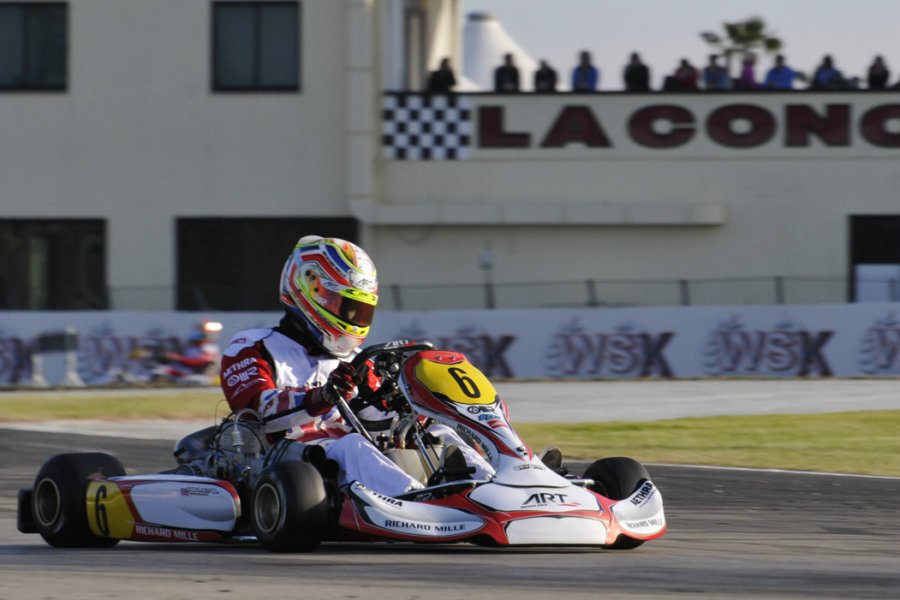 A spring-like sun has been shining all day long on the International Circuit La Conca, where the first round of the WSK Champions Cup of karting has just finished. The stand of the Italian facility was overcrowded with spectators who were able to enjoy a series of thrilling races. Mechanics and technicians of the teams had to work hard to change the setting of the karts to make them run on dry asphalt after yesterday’s changeable weather, with showers and low temperature: this aspect of the race – from a technical point of view – was particularly important today. The results achieved by the drivers – in some cases rather unpredictably – will be added to the points they’ll manage to score next week, in the second round of the WSK Champions Cup. Only then we will be able to know the names of the winners of the event.

Lorandi wins hands down  in KF
At his second race in KF, Alessio Lorandi (Tony Kart-TM-Dunlop), the new KFJ World champion, immediately shows he will be one of the top drivers of the category this year. After winning the pre-final, the Italian gained an early lead in the final. His lead over the rest of the pack grew lap after lap. It was immediately clear that his opponents stood no chance to close the gap. Anyway, the other drivers were able to battle hard for the podium places. The duel for the second and third place between the Polish Karol Basz (Tony Kart-Vortex-Dunlop) and the Danish Nicklas Nielsen (Kosmic-Vortex-Dunlop) was particularly thrilling. They exchanged position several times and, with only few laps remaining, Basz managed to clinch the second position and to keep it until the chequered flag, fending off Nielsen’s counterattacks. Lorandi leads the standings of the WSK Champions Cup; behind him the French Julien Darras (Kosmik-Vortex-Dunlop), winner of the Prefinal A.

Ahmed wins in KF Junior
Before the Final, many drivers stood a good chance to achieve victory. The favourite drivers were the English Enaam Ahmed (FA Kart-Vortex-Vega) and the German Mick Junior (Tony Kart-Vortex-Vega), winners of the Prefinals A and B and, for this reason, in the front row of the Final. At the start the Brit was the fastest, while the German did not have a good start and even slowed down the drivers behind him. So, the battle for the podium was between Ahmed, who led the race from the beginning until the end, the Danish Daniel Ticktum (Zanardi-Parilla-Vega) and the Russian Matvey Maslov (Tony Kart-Vortex-Vega),  who  eventually finished second and third respectively. Mick Junior, who seemed fast enough to finish on the podium, lost a position in the final phase of the race when he got overtaken by Max Fewtrell (FA Kart-Vortex-Vega). Junior was finally fifth. Ahmed leads the standings, with  Ticktum second and Mick Junior third.

Ben Hanley wins in KZ2
The KZ2 final was a gripping race. The Belgian Jonathan Thonon (Praga-Parilla-Bridgestone) was the pole-sitter and the winner of the Prefinal, but at the start he wasn’t as fast as the French Jeremy Iglesias (Lenzo Kart-LKE-Bridgestone), who started next to him from the front row. However, Thonon managed to regain the lead of the race quickly, even though he had to fend off the attacks of the English Ben Hanley (Art GP-TM-Bridgestone). The Brit managed to gain the leadership only in the last phase of the race. Thonon was eventually forced to retire for a technical issue, while Iglesias gave in to the attacks of Flavio Camponeschi (Tony Kart-Vortex-Bridgestone) and Riccardo Negro (Top Kart-TM-Bridgestone), who battled to score a podium position.  Eventually, Hanley crossed the finishing line in second position, preceding the two Italian drivers Camponeschi and Negro. Hanley leads the standings, followed by Iglesias and Camponeschi.

Fusco confirms his leadership in the 60 Mini
The Italian Giuseppe Fusco (Lenzo Kart-LKE-Vega) confirmed in the Final the excellent performance he put in in the previous sessions of the race, when he achieved the pole position in qualifying, won several heats and the Pre-final A. After all these excellent results, Fusco couldn’t help winning in the Final, where he beat the Spanish David Vidales (FA Kart-LKE-Vega) into second position. The Russian Dmitrii Bogdanov (Tony Kart-LKE-Vega), winner of the PreFinal B, completed the podium. Fusco leads the current standings, followed by Bogdanov.

The WSK Finals on TV
On Wednesday 5th March, at 6.00pm, the delayed broadcast of the Finals from Muro Leccese on RaiSport 2.