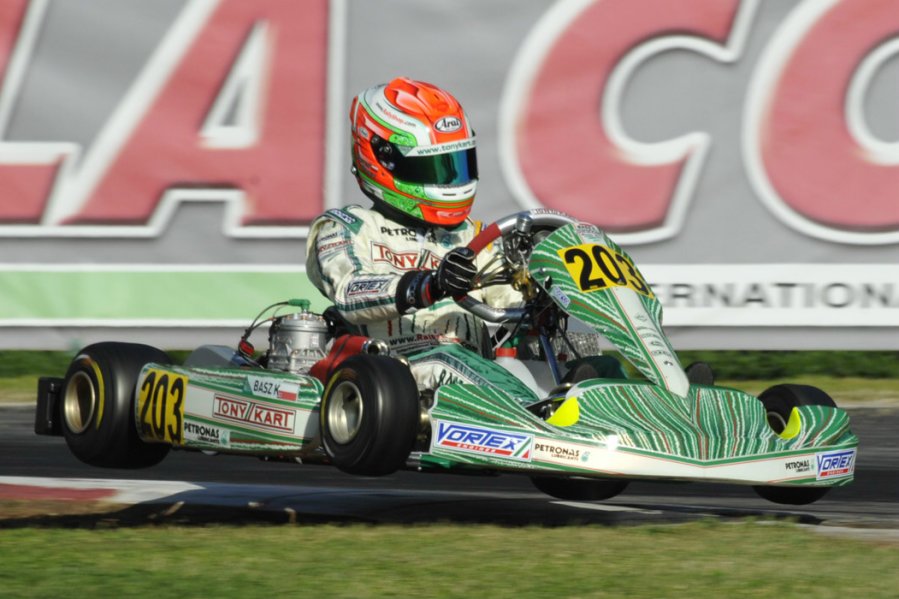 WSK drivers had the upper hand over the bad weather. Today’s schedule was tight and the heats took place under different weather conditions. The 183 drivers had to cope with a sudden  climate chance over the 1,250 meters of the International Circuit La Conca, after yesterday’s rather warm temperature. Lower temperature and showers during the afternoon made the driver’s task much harder, especially for those drivers who aim at succeeding in this double event of Muro Leccese (Italy). Getting a good result as soon as possible is the goal of every participant in the race, especially because the race has got only two rounds in schedule: the second and decisive race is taking place next weekend, with the finals on Sunday 9th March.

Nielsen e Basz back on top in KF:
In KF, Nicklas Nielsen (Kosmic-Vortex-Dunlop) gained the top position after yesterday’s disappointment for not achieving the pole position. At the end of the series of the qualifying heats, Nielsen managed to win twice and to finish in the first position in the other two heats he took part in. Thanks to these results he is now leading the current standings and, tomorrow morning, he will be the pole-sitter of the Prefinal A. Also the Polish Karol Basz (Tony Kart-Vortex-Dunlop) has recovered well after yesterday’s fourth time. His heats went decidedly better and, at the end of the day, he managed to clinch the pole position of the Prefinal B. Callum Ilott (Zanardi-Parilla-Dunlop), who was the fastest yesterday, did well too, even though he wasn’t the fastest in today’s heats. He will start from the front row of the Prefinal B, next to  Basz. Both the drivers will need to watch their back, as the slots of the second row will be filled by the reigning world champion Tom Joyner and the strong Dutch Martijn van Leeuwen (both of them on Zanardi-Parilla-Dunlop).  Nielsen, on the other hand, will have the British Ollie Norris (FA Kart-Vortex-Dunlop) next to him, while the second row will be occupied by the French Julien Darras (Kosmic-Vortex-Dunlop), second after yesterday’s qualifying, and the Russian Egor Stupenkov (Energy-TM-Dunlop). 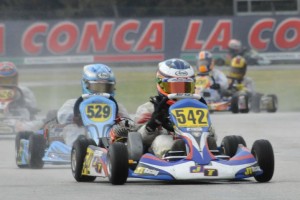 The duel between Ardigò and Camponeschi in KZ2
Great duel between the two Tony Kart drivers: there were two heats on schedule today for the KZ2 category and the Italian Flavio Camponeschi and Marco Ardigò (both on Tony Kart-Vortex-Bridgestone) won a race each. The last heat, on schedule tomorrow, will decide the pole position of the Prefinal. Also the Belgian Jonathan Thonon (Praga-Parilla-Bridgestone) and the English per Ben Hanley (Art GP-TM-Bridgestone) stand a good chance and can aim at victory.

Fusco and Coluccio in pole in the 60 Mini
The Italian Giuseppe Fusco (Lenzo Kart-LKE-Vega) has made himself conspicuous in the 60 Mini since the beginning of the weekend. Today he set the fastest time in qualifying and won two heats. He is the driver to beat and, tomorrow, he will start from the pole position of the Prefinal A. Next to him, the Polish Maciej Szyszko (Kosmic-LKE-Vega), who had a consistent pace in the heats. The Italian Luigi Coluccio  (Top Kart-LKE-Vega) will be the pole-sitter of the Prefinal B. He won once today and, tomorrow, he will have the Turkish Mehmet Dalkiran (Top Kart-Parilla-Vega) by his side.

WSK Finals on video and on the web
On Wednesday 5th March, at 6 pm, the delayed broadcast of tomorrow’s Finals on Rai Sport 2. Tomorrow, from 10.40am, on the official website www.wsk.it, all the races until the finals on the International Circuit La Conca.