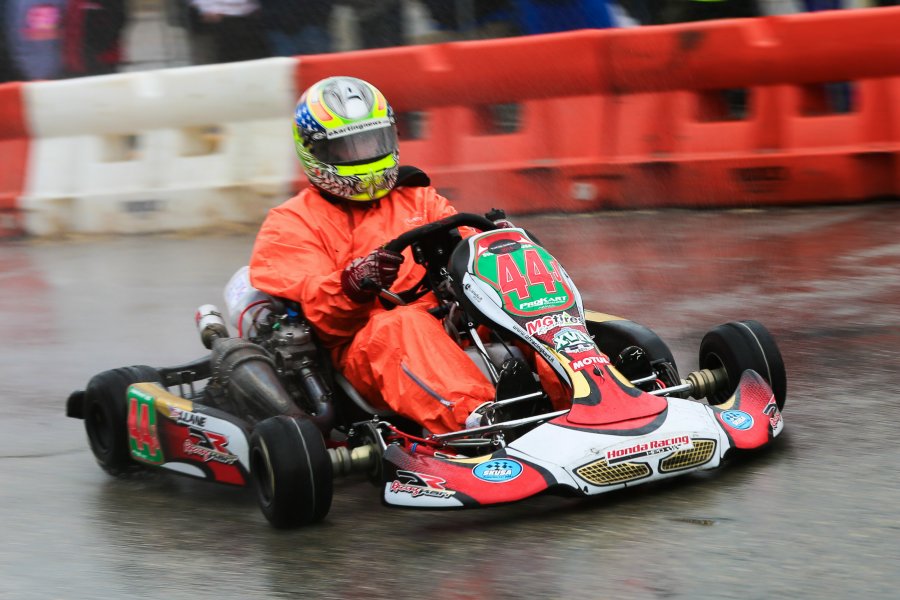 Long-range weather forecasts for this year’s Lone Star Grand Prix gave us all the chance for optimism.  Coming into the event, temperatures soothing to those from the northern states were predicted for the entire weekend, although rain was a low-percentage possibility for Sunday.  After a warm day on Saturday, the worst possible option rolled in, capping the weekend as both rain and unseasonably cold Texas winds turned the race into a survival effort for those not dressed in helmets and race suits.  For those with competition equipment installed from head to foot, the focus was different.  The cold temps and rain were not an inconvenience, but instead, a challenge, the slick racetrack became the ‘great equalizer’ as is so frequently discussed.

In the headline Stock Moto Light class, ‘Wild Thing’ Josh Lane proved his talent and the worth of his DRT Racing DR Kart as he stormed to a huge race win.  Two drivers posted double victories, as TaG Master hotshoe Scott Falcone (Arrow) swept both TaG Senior and TaG Master, smoking the field in the wet, while Jesse Woodyard (Intrepid) bested the fields in TaG Junior and Stock Moto Junior to walk away with big wins.

TaG Senior
First on course, the TaG Senior category was a sign of things to come, with the rain falling hard and the drivers getting their first taste of rain racing around the streets of Lockhart. Scott Falcone (Arrow) was able to get the jump through the opening corners as top qualifier and Prefinal winner Austin Osborne (Tony Kart) slotted in second. The front two pulled away quickly as the rest of the field was searching for grip in the wet. A number of drivers were sliding into the barriers, and that include Osborne. Lap five, he drifted too wide at corner nine, making contact and ending his shot to battle for the win. This left Falcone all alone out front, as the KartSport North America driver lapped all but second place driver Bradley Smith – who avoided all the wrecks in front of him to move up the order and remain on the lead lap. Ryan Rush edged out Ronnie Price and Nick Martin for the third position on the podium.

Open Shifter
One of the wild races of the day took place in the Open Shifter category. The race began with outside polesitter Josh Lane (DR Kart) stalling before the green flag waved. After the field took off, Lane restarted himself and joined the race, with only 11 drivers starting the rain soaked event. Polesitter Connor Wagner (FA Kart) led the way with Coy Dayton (Tony Kart) behind him. Jake French (Intrepid) dropped to third, but retired after the third lap making contact with the turn nine barrier. 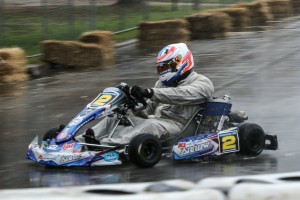 All eyes were on Lane, as the ‘Wild Thing’ was super quick and into the third spot by the end of lap three. He was a full two seconds a lap quicker than Wagner, and took over the lead on lap seven. Just after they crossed the line, Wagner locked up the brakes and drove off into the barriers in turn one. A corner worker was standing right where Wagner made contact, sending them into the worker. He was knocked down, with the wind knocked out, and a few bruised ribs, but the red flag came out as the track needed to be repaired. This put Lane as the provisional winner, until officials removed him from the results for leaving the seat of his kart. LSGP rule 8.11 states that ‘Drivers are not allowed to restart after exiting their kart’. This handed the win to Dayton. Jerry Rhodes finished second with Aussie driver David Broun with Bermuda driver Scott Barnes and Conner Wagner completing the top-five.

KT100
The rain continued for the third group on the course for the main event – KT100. For top qualifier Austin Osborne (Tony Kart), it was smooth sailing. After getting shuffled back in the Prefinal and driving his way to second, he darted to the front from outside row one and never looked back. The Texan, making his first Senior level start ever, led all eight laps to his first victory. He lapped all but second place driver – Brandon Pierce. Jamey Brown was third with Richie Warren and Prefinal winner Brekk Harris completing the top-five.

Stock Honda Heavy
In Saturday’s Prefinal event, DRT Racing’s Brian Fisher was the quickest driver. Making his way up from fifth, he was on the bumper of top qualifier and race winner Scott Barnes (GP). Fisher was able to grab the holeshot to take the lead in the eight-lap event, with fellow DR Kart driver Chris Jennings coming through into second as Barnes fell to third. The top two drove away early, with Jennings right on the bumper of Fisher. They ran that way until the final circuit, with Jennings making his move in the left-hand turn four. He secured the position, and was able to hold on, scoring his first LSGP in his race debut. Fisher settled for second, with native Texan Trevor McAlister (Praga) winning the fight for third. Coy Dayton (Intrepid) finished fourth, just where he started, as Barnes dropped to fifth.

TaG Junior
Two drivers stood out in Sunday’s TaG Junior main event. Defending race winner Jesse Woodyard (Intrepid) swept the action on Saturday, taking top qualifier honors and the Prefinal win. He started on the front row with Czech driver Petr Ptack (Praga), who took over the lead with the green flag waving. Woodyard made contact with a haybale during the opening circuit, and dropped back to third behind Juan Gonzalez (Praga). Ptack was able to put some distance between him and the fight for second, with Woodyard driving one-handed as the carburetor was not properly on the kart. Ptack would go on to cross the strip first by six seconds ahead of Woodyard, unfortunately was removed in tech for an exhaust issue. That gave the win to Woodyard, piloting the entire eight laps with one hand on the wheel, and one on the engine. Gonzalez was classified second with Junior rookie Max Hewitt third. Ethan Baitup, started 11th and fought his way to fourth, with Garret Ramirez fifth.

Chonda
Tommy Muth was a podium finisher last year in Chonda, and this time, the 59-year old took to the wet track like a master to claim the overall victory. Kristi Thompson and Nathan Wilkens led the field to the green, as Wilkens jumped out to the lead with Muth sliding into second before the end of the opening lap. The top-two were able to get away, and quickly hit lap traffic as the 25-kart field navigated the circuit. Just after the halfway point, Wilkins came out of turn four a little too hot, and spun off-course. This gave Muth the lead, which he held to the checkered for the victory. Wilkens recovered to end up second. Thompson was third in the Light class with Robert Snyder and Gene Mayo completing the podium. The Heavy class was won by Joseph Smith, who was just a few kart lengths away from winning the overall victory behind Muth. For his efforts, Smith will earn a custom LSGP cowboy hat – worth $700. Bill Choice was second, with Chance Barthold, Mike Lee and Charles Hopper making up the top-five.

Stock Honda Junior
Defending race winner Jesse Woodyard (Intrepid) made it much harder on himself to secure a second straight victory at the LSGP. A trouble at the start of the Prefinal put him at the tail of the 12-driver field for today’s main event. A great jump put him up to fifth in the opening lap, as Prefinal winner Austin Wilkens (DR Kart) led the field. Up to third by lap three, Woodyard was onto the top-two quickly. Going three wide with the leaders into turn one, Woodyard came away with the lead. Posting the only laps under the 50-second mark, the Oklahoma driver scored the victory by nearly five seconds. Wilkens held on for second, with Harry Gottsacker retiring on lap five after battling for the lead. Andretta Young (Birel) ended up in third from sixth, as AJ Hayes and Hannah Williams (CRG) completed the podium. 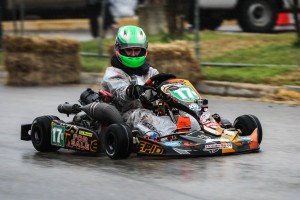 TaG Cadet
The young drivers of TaG Cadet showed the other categories how to put on a show in the wet weather, making each of the eight laps exciting while keeping it safe the entire time. Top qualifier and Prefinal winner Riley Dickinson (Tony Kart) set the pace with Maxwell Waithman (Tony Kart) and Ethan Arndt (Tony Kart) trailing. Lap three however, Waithman spun around in turn four, and fell out of contention. That left Dickinson and Arndt to duel for the victory. Arndt went for the lead, taking the spot on lap seven, but Dickinson responded on the final lap. Arndt ran a defensive line through the first three corners, with Dickinson getting a run inside at turn four. He went into the corner too quick, and spun on the exit. Arndt darted through and drove to the checkered flag first, earning victory. Dickinson recovered to end up second, as Yusuf Moola (Birel) drove to third as the only other driver on the lead lap. Tyler Orum was fourth with Kyle Dickinson in the fifth spot.

TaG Master
It wasn’t the show we expected to see, as it was nearly a match of the TaG Senior performance put in by Scott Falcone (Arrow). He and Robby Mott (Corsa) led the field to the green flag, with the top two pulling away early in the opening lap. That was until they exited the hairpin turn and Mott’s engine lost power. Unable to get the onboard starter to work, his race was done. Falcone piloted his KartSport North America entry forward, posting laps three seconds quicker than any other driver to win his second victory by more than 38 seconds. Scott Greiner (Italkart) was second for much of the race until he was run down by a charging Mathew Souza (CRG), starting dead last. Grenier settled for third, with Kurt Fisher (CRG) coming from 16th to fourth and Paul Jones completing the top-five.

Stock Honda Light
The final race of the 2014 Lone Star Grand Prix was the headline Stock Honda Light category 30 drivers taking to the circuit for the eight-lap battle. Jake French (Intrepid) started from pole position with Ryan Kinnear (Intrepid) scheduled to start outside pole, but elected to sit out after a DNF in a previous main event. With the spot open, the field took the green flag with French leading the way over Josh Lane (DR Kart) through the first few corners. That was until Lane took the top spot away going into the hairpin turn six. From there, it was no looking back as Lane put down laps about two tenths quicker then French. The two ran 1-2 the entire eight-lap main event, with Lane securing the victory. French was second, about 1.4 seconds back. Jack Freese (Intrepid) started fifth, and was into third on the opening circuit. The Leading Edge Motorsports driver got away early, and maintain the position to the checkered flag. Connor Wagner (FA Kart) was hounded by Sabré Cook (CRG) the entire time, just unable to make a move and rounded out the top-five podium.

Lane scored one final prize at the podium ceremonies, winning the drawing for the Granja Viana 500 event in Brazil, sponsored by MG Tires. Custom cowboy hat was awarded to Stock Honda Heavy winner Jennings, with Bell Helmets, Rock Island Grand Prix, Miller Motorsports Park, and many other companies providing prizes for the top-five drivers at the 2014 Lone Star Grand Prix.