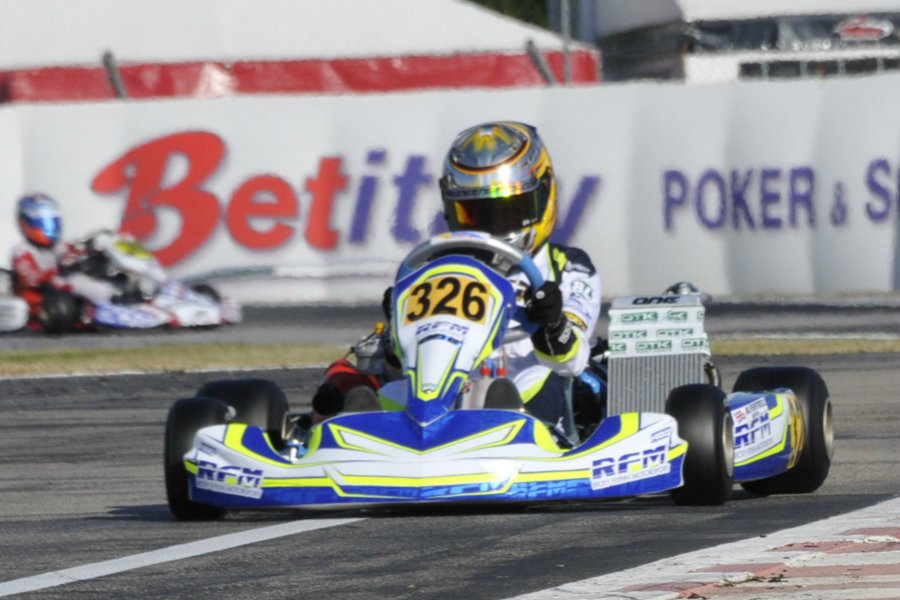 The WSK Promotion 2014 season has begun on the International Circuit La Conca. The first out of two rounds of the WSK Champions Cup – scheduled in two consecutive weekends – is the opening event of the season. The schedule of both the rounds is tight and spectacular in order to give the event the appeal spectators are looking for.The venue of the race is the most eastern facility in Italy, just ten kilometres away from the coastline of Otranto. The circuit of la Conca, where all the most thrilling races for the World titles of karting have taken place, is hosting the two rounds of the Cup this weekend and next weekend. All the most interesting talents of international karting are taking part in the event: there are drivers coming from 30 countries and from 4 continents. There are 183 scrutineered entrants to the 4 categories of the race: 60 Mini, KF Junior, KF and KZ2. Today, at the end of two days dedicated to free practice, the afternoon was reserved to qualifying which has shown the potentiality of teams and drivers.

Fewtrell is outstanding in KF Junior signing the pole position
The timekeeping was the protagonist of today’s program. The times told us a lot about who stands a good chance to aim at victory. The English Max Fewtrell (FA Kart-Vortex-Vega) hit the target with his remarkable 47”516, 85 milliseconds faster than the American Devlin Defrancesco (Tony Kart-Vortex-Vega). They both achieved excellent results during last season and, this year, they are eager to get to the top of the category. The same can be said about Logan Sargeant (Tony Kart-Vortex-Vega) and Enaam Ahmed (FA Kart-Vortex-Vega): the American and the Brit placed respectively third and fourth and are ready to battle. In the meanwhile, the first two qualifying heats in the late afternoon were won by Fewtrell and Defrancesco.

Ilott immediately on top in KF
This is the year of the generational change and the British Callum Ilott (Zanardi-Parilla-Dunlop) has made himself immediately conspicuous. He set the best time in KF 46”813. The French Julien Darras (Kosmic-Vortex-Dunlop) was the real surprise and placed second, just 30 milliseconds slower. The most experienced drivers, at the moment, are behind. The Danish Nicklas Nielsen (Kosmic-Vortex-Dunlop) is third, fourth the Polish Karol Basz (Tony Kart-Vortex-Dunlop). Good start for the Italian Alessio Lorandi (Tony Kart-TM-Dunlop), who got a promotion in KF after his victory in the KFJ World Championship last year. He set the fifth time, 77 milliseconds behind Ilott’s pole.

Camponeschi outpaced the rest of the pack in KZ2
The first appointment of the season sees Flavio Camponeschi (Tony Kart-Vortex-Bridgestone) at the top of the KZ2 category. He set the pole at 46”294. Behind him, the winner of several World titles Jonathan Thonon (Praga-Parilla-Bridgestone), who is setting his first times with his new team. The Czech manufacturer has brought good luck so far, and the Belgian driver is only 14 milliseconds behind the pole sitter. Third and fourth two other World champions: the Italian Marco Ardigò (Tony Kart-Vortex-Bridgestone) and Davide Forè (CRG-TM-Bridgestone). Another Italian, Riccardo Negro, behind the wheel of the Top Kart-TM provided by his new works team, had a very good start. He won the WSK Euro Series in 2013 and in La Conca he placed sixth, behind the Dutch Jorrit Pex (CRG-TM-Bridgestone).

First laps in 60 Mini and Abrusci is immediately outstanding
Today only free practice for the 60 Mini. The category- reserved to drivers from 10 years of age – starts its qualifying session on Saturday. In the meanwhile, the Italian Nicola Abrusci (Tony Kart-LKE-Vega), is first with 54”279. Behind him another Italian, Giuseppe Fusco (Lenzo Kart-LKE-Vega), 319 milliseconds slower.

The race on video and on the web
Before the delayed broadcast on Rai Sport – next week – all the images of the event are available on www.wsk.it. The official website will broadcast the event on Sunday 2nd March from the Prefinals. On the same website, all the real-time standings.