Drivers double in qualifying, orders shaken up in Prefinal action to setup for Sunday’s features

Texas karting has been a major center of growth and cooperation in recent years, and it took another big step forward as the third annual Lone Star Grand Prix got underway on Saturday with the running of practice, qualifying and a full set of Prefinal events.   The ‘come one, come all’ nature of the one-off race, with its full spectrum of classes from four-cycle ‘Chonda’ to full-on shifters, has provided the state’s karters with an incredible marquee event that has drawn racers from all over the country as well.  The atmosphere is extremely festive and even with some unfortunate weather and a relatively rough track, the common theme of driver feedback is that this is just a cool event, bottom line.  The city of Lockhart has shown tremendous hospitality and as the ‘BBQ Capital of Texas, post-race action has centered on the incredible restaurants that are located in the downtown core.  Great food and exciting karting seem to fit very well together.

The LSGP event staff worked late into the night on Friday event to complete the construction of the track, which was soaked down by light overnight rains and early morning sprinkles.  The track layout includes nine corners, and not surprisingly, the typical street circuit features eight 90-degree corners.  The single hairpin brings a great deal to the unique aspect of the track, adding some much to the necessary racecraft and chassis set-up.  The downtown core of Lockhart has a slight overall change in elevation that adds to the character of the track, as does the rougher nature of the city’s streets.  The layout is far from glass-smooth, which has presented the drivers with the incredible challenge of finding the balance between fast times and the least punishing route. 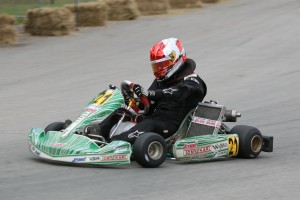 As a result, the racing was action-packed and exciting, and the Prefinals only served to be a precursor of what we’ll see on Sunday.

TaG Senior (28 drivers)
Texan Austin Osborne had been racing for a number of years, and made his Senior debut at the LSGP with fast time in qualifying. The Tony Kart driver posted a 43.109-lap for the pole position. First time LSGP racer Scott Falcone put his KartSport North America entry into the second spot, back by three tenths. Another Masters driver moving over is Brian Fisher – who slotted his DRT Racing DR Kart in third, ahead of Jesus Robles (Tony Kart) and Luke Waller (Intrepid).

Osborne led the field to the green flag for the eight-lap Prefinal and showed the way until a red flag as the field was completing the second lap. Everyone walked away, and the race resumed with Osborne leading a single-file field. Robles was into third after the first lap, jumped into the lead as the green flag waved to restart the race. Osborne was quick to respond, retaking the lead before the lap was over. Falcone was slow to start off, dropping back to fourth, but found his way back into second. By then Osborne held a solid lead and drove to the win by three seconds. Falcone was second with Fisher up to third, dropping Robles back fourth with Waller in fifth. 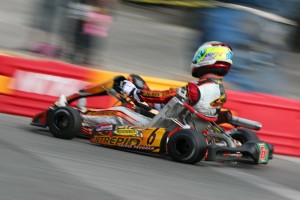 Wagner took the holeshot and led all eight laps for the race win. French and Lane made it a three drivers lead pack, with Lane moving into second by lap three. They ran very similar lap times, with Lane scoring the fastest, but unable to work past Wagner for position. Scott Barnes (GP) came up from sixth to fourth, getting away from Coy Dayton (Intrepid). Fisher elected not to compete, dropping down to just two classes to focus on, as did Kinnear.

KT100 (18 drivers)
Earning his second pole position on the day was Austin Osborne, as the Tony Kart pilot posted the fast lap of the KT100 qualifying session. A 45.026 seconds put him seven tenths ahead of the field. Brekk Harris, making his first LSGP start, slotted in second, just ahead of last year’s winner Jamey Brown. Texans Joe Taylor and Craig McLain capped off the fast five.

A wild opening corner shuffled up the field as Osborne dropped down the order, with Harris jumping out to the lead. Osborne put down laps nearly one second quicker than anyone else, and fought his way up to second after eight laps. Harris was still 1.6 seconds ahead when the checkered flag waved, setting up the same front row except the two will swap positions. Taylor was able to escape the opening corner skirmish, running second until Osborne caught and passed him. The IKF Road Race Duffy winner finished third, with Brandon Pierce fourth and Brown recovering in fifth.

Stock Honda Heavy (32 drivers)
All the way from Bermuda, Scott Barnes (GP) was able to put in a solid lap during the eight-minute session. His 41.890-second lap was the quickest of the session, edging out last year’s winner Coy Dayton (Tony Kart) by a slim 22 thousandths of a second. Former SuperNationals winner Chris Jennings and Brian Fisher were third and fourth in their DR Karts as Roy Montgomery (CRG) rounding out the fast-five. 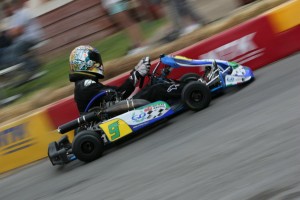 Barnes took full advantage of the pole position, leading all eight laps of the Prefinal. Away clean, he lead Jennings, Dayton and Fisher early on. While Barnes took the win, it was Fisher who was the quickest driver on the course. The DRT Racing driver fought his way up to second, and on the bumper of Barnes by the time they took the checkered flag. Jennings ended up third with Dayton and Texas native Trevor McAlister (Praga) in fifth.

TaG Junior (17 drivers)
During last year’s LSGP, Jesse Woodyard (Intrepid) walked away with the TaG Junior category. He’s up to repeat that feat, beginning it right with the fast time in qualifying. A 44.345-second lap was four tenths quicker than anyone else in the field. Max Hewitt, a new driver to the Junior ranks after racing for a number of years in Cadet, was second in the order with an impressive run. Praga factory driver from the Czech Republic Petr Ptack was third, with Ryan C. Lewis fourth and Miguel Ruiz fifth after the session was cut short by a red flag – with drivers walking away.

Woodyard led all eight laps of the Prefinal to keep his score perfect in TaG Junior. He got away clean through the opening corners, and only had the pressure of Ptack, who slipped back to 1.6 seconds after eight circuits. Jarret Voorhies came up from eighth to third on the opening lap, and held it through the entire time as Marcellius Dukes and Juan Gonzalez (Kosmic) completed the top-five.

Chonda (31 drivers)
First time LSGP racer Kristi Thompson (Arrow) laid down a killer lap time, as the only driver into the 50-second bracket. Her 50.932-second lap aboard an Arrow machine put her eight tenths clear of the field. Tommy Muth (Intrepid) was among the contenders last year, and was right there in second spot. Nathan Wilkens was third with Bill Choice and George Hipsher rounding out the fast-five.

Thompson was able to hold onto the top spot in the Prefinal, but not without a challenge. After scorching the field in qualifying, Wilkens stepped up to pressure the top qualifier. Each led for a time but Thompson prevailed after negotiating the lap traffic well. Muth trailed the top two, running a close third with Gene Mayo and Hipsher completing the top-five. Choice was sixth, but was the top driver in the Chonda Heavy category in the Prefinal.

Stock Honda Junior (12 drivers)
Making it two for two, Jesse Woodyard (Intrepid) is looking for another double win weekend at the Lone Star Grand Prix. A lap of 42.021 seconds secure his second pole position of the day in Junior competition, ahead of Austin Wilkens (DR Kart) by more than eight tenths of a second. Evan Roshak (CRG) from Colorado was third with Texans Andretta Young (Birel) and Hannah Williams (CRG) filling out the fast-five. 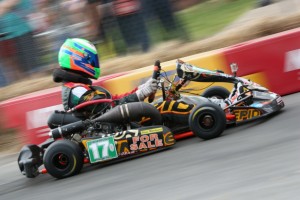 Jesse Woodyard was perfect in TaG Junior, but has to come from the tail of Stock Honda Junior grid to defend his crown (Photo: Shofner Films)

Trouble struck the young Woodyard as a mechanical issue stalled his machine on the grid. The field took off without him, as Wilkens displayed some strong speed in the eight lap event. It was nearly one second a lap he extended his lead to the checkered flag, giving him the pole position for the main event on Sunday. Harry Gottsacker displayed his own speed, up to second after starting seventh. Roshak held onto the third position, with AJ Hayes and Max Hewitt completing the top-five.

TaG Cadet (15 drivers)
Riley Dickinson only needed three laps to set the fast time in TaG Cadet qualifying. A lap time of 47.620 seconds set the tone, as it was nearly four tenths quicker than Maxwell Waithman. Ethan Arndt was third with Yusuf Moola and Jak Crawford completing the top-five.

Dickinson led all eight laps in the Prefinal to set up a run at the victory on Sunday. The top three, including Arndt and Waithman pulled away from the field. They ran static until Waithman was able to use lap traffic to work past Arndt for the second spot – finishing that way at the checkered flag. Moola drove to fourth with Crawford a solid fifth.

TaG Master (23 drivers)
Top honors in qualifying came down to just two drivers, both making their first LSGP. Colorado’s Scott Falcone used the extra track time in TaG Senior to help him earn the pole position in the Master division. Carrying the SKUSA #1 plate, Falcone posted a 43.399-second lap to edge out Ribtect’s Robby Mott (Corsa). Mott was a spectator last year, and was the one who invited Falcone to come and race. Puerto Rican Hector Alvarez (Intrepid) was third with L.A.D’s Scott Grenier (Italkart) up to fourth over Tommy Vieth (Tony Kart).

Mott used the outside line to steal the lead as the eight-lap Prefinal began. The two pulled away, setting up for a duel to the finish. Falcone dropped back some, but closed up in the final circuits. Mott drove a defensive line after the Colorado driver showed a few attempts at taking back the lead. Mott won the battle, but the war will continue tomorrow. Greiner was into third at the start, but would get passed by Alvarez – who ended up within one second of the leaders and could play a part in tomorrow’s action. Vieth was making his way forward, around Greiner for fourth on lap three and looking to run down Alvarez. That was until he made contact with the barriers on the exit of the final corner. He did a complete 360 spin, sending Greiner and David Pergande (Arrow) spinning to avoid. Grenier ‘discoed’ his way through without any contact, driving off to fourth. Pergande locked it up and spun around, but kept going and finished 11th. Vieth continued as well, placing seventh behind Dean Boyd (Tony Kart) and Donnie Cluck.

The top-five slotted in line when the lights went out to begin the eight-lap Prefinal. French every lap, pulling away inch by inch to secure the win by just over four seconds. Second through fourth ran nose to tail, until Freese hit a haybail pushed out from another driver the previous lap. He continued on, but lost the spot to Wagner – who drove to the fourth spot behind Kinnear and Lane, with Freese ending up in fifth.

Sunday Finals
Everyone returns tomorrow for two on-track sessions. Warm-ups begin at 8am, with opening ceremonies set for 10:30am. Main events, 15 laps scheduled for each of the 10 categories, begins at 11:30am.