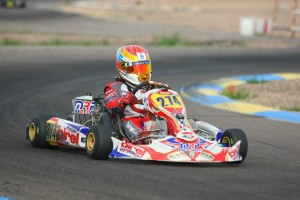 Nicholas Brueckner nearly drove to top-10 finish at the PKRA facility, coming from the tail of the Junior Max field (Photo: SeanBuur.com)

Nicholas Brueckner traveled to the race track for three straight weeks equating to three educating weekends for the rising karting star. Following two weekends in Ocala for the Florida Winter Tour rounds, the MRP Motorsport/Birel America driver traveled west to the Phoenix Kart Racing Association to contest rounds three and four of the Rotax Challenge of the Americas on the February 21-23 weekend. He experienced ups and downs over the course of the three days, as the Junior Max rookie driver enters just the second month of competing at the next level in the United States Rotax Max Challenge program. Despite many hardships, Brueckner was able to leave recording his best finish of the series to date.

Brueckner was among the top drivers in the final practice on Friday afternoon. He posted the third quickest lap time of the final 20-minute session. The speed carried over into the morning warm-up on Saturday, but lost a bit of speed to end up ninth in the qualifying session. A top-10 finish was on the horizon during the prefinal until Nick was run over by another competitor, dropping him outside the top-20. He pushed his way to the checkered flag to be classified 16th. Contact again in the main event after just three laps put Brueckner at the tail of the field with a damaged Birel machine and Rotax engine. After the motor began to overheat, Nick was forced to pull in early, ending his race.

“We went the wrong direction in qualifying, and that hurt us when it came to the prefinal as we were in the middle of the pack, rather than out front,” stated Brueckner after returning to his home in Texas. “I feel bad for all the hard work that my mechanics Tim Lobaugh and Tony Tesoro put in repairing the kart and engine Saturday night. They worked extra hard on making sure everything was ready to go Sunday, as we knew we had the pace to compete for a podium finish.”

Sunday brought on its own challenges for the young Junior driver, but began with similar results in qualifying after he posted the 11th quickest time of the session. The prefinal only lasted two corners for Nick, as contact once again damaged his Birel machine and he was forced to retire without completing a single lap. Starting 29th in the 25-lap main event, forward was the only direction Brueckner had to go. Clean through the opening corners, Nick was into the top-20 by lap four and steadily continued moving forward. Up to the 11th position by the halfway point, he posted his quickest laps of the race attempting to run down the tail end of the top-10. Coming just a few seconds short, Nick finished the feature in the 11th spot for his best result of the series. 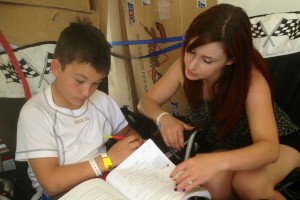 “The day did not begin as we hoped, and crashing out of the heat race was not expected,” continued Nick. “I never gave up, and it showed in the main event as I almost drove up to a top-10 finish. I can’t thank Tim and Tony enough for their help, along with the Durrant family for their support throughout the weekend along with all my family members. We are determined to earn better results in April.”

The busy three week adventure is over, but the work continues as Nick continues to follow his studies at RosehillChristianSchool. He was just recently featured in their weekly newsletter, and continues to participate in football and basketball when his racing schedule does not interfere. While on the road for the three long weeks, Brueckner kept up with his school work, thanks to the efforts of Trackside Tutoring, a new program being offered by Brittany Dolye Lobaugh.

Just recently, an article was published announcing that Nicholas finished third in the eKartingNews.com US Rotax Driver Rankings for the 2013 season. Next on the schedule for Brueckner is a return to Florida to close out the FWT championship programs, set for the OrlandoKartCenter. March 14-16 is the finale weekend for the TaG Junior category, where Nick sits seventh in the point standings. The following weekend, Brueckner competes in both the Mini Max and Junior Max categories. A weekend off before he heads to California and the Sonoma region to the SimracewayPerformanceKartingCenter on April 4-6 for the Challenge finale.