Victory for CRG-USA at Rotax Challenge of the Americas

Already established as a major player in the sport, CRG-USA race team is fast becoming a powerhouse in the United States karting scene. Over the February 21-23 weekend, the Colorado-based operation contested the third and fourth rounds of the Rotax Challenge of the Americas in Phoenix, Arizona, and the team put in a strong outing. Competing on the 3/4-mile long Phoenix Kart Racing Association track, team drivers did battle for two days of racing in seven different classes. CRG-USA had a very successful weekend as its stable of seven drivers recorded six podium finishes and scored the team’s first win of the season, thanks to DD2 pilot Sabré Cook scoring the victory on Sunday afternoon.

CRG-USA supported four drivers across the two classes of DD2 and DD2 Masters, which raced on the track at the same time. Sabré Cook and Andy Lee returned in DD2, while Ben Johnston and Mike Urban carried the banner in the DD2 Masters category. The quartet posted six podium results over the two days, continuing the dominance of the CRG brand in the two-speed Rotax program. 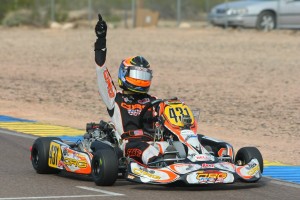 Sabre Cook drove to her first Rotax Challenge of the Americas victory in DD2 (Photo: SeanBuur.com)

Cook was recovering from an illness that had stuck with her for the past three weeks, and she was excited to be on-track once again, putting her CRG second on the time sheets in Saturday qualifying, missing the pole position by less than one tenth of a second. Not far behind Cook was Lee in fourth place. Cook fended off challenges to secure the second place finish in the Prefinal and opened up the main event as the leader. As the laps went on, she slotted back to second suffering from a deflating right front tire. Sabré held on and was able to score her second runner-up finish of the season. Lee ran fourth in the Prefinal and was with the leaders in the main event before losing his sidepod, which forced him to retire from the event early. Cook once again qualified her CRG second for Sunday’s action, but turned that into a two-second victory in the heat race. The main event was a gun fight, and Cook was able to prevail on the final circuit to secure her first series victory. She dedicated the win to her uncle Randy Cook, who passed away on New Year’s Day. Lee battled with issues all day, ending up placing fifth in what was a challenging weekend at his home track.

Doing the honors of representing CRG-USA in the DD2 Masters class in Phoenix was Ben Johnston and Billet Performance Karting owner Mike Urban. Johnston was able to improve with each session on-course, driving to a pair of runner-up finishes behind defending series champion Alan Rudolph. Urban continued to gain valuable experience learning the nuances of the CRG chassis, driving to third place in each of the main events on the weekend. 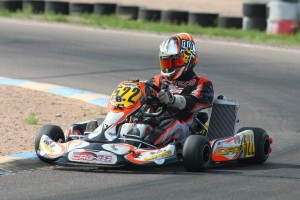 Joey Wimsett continues to split time between his residence in Oregon and his temporary home with the CRG-USA family in Colorado. The DD2 runner-up at the 2013 Rotax Grand Finals has been committed to helping CRG-USA develop their Rotax program. A move from the CRG Blackstar 30/32mm chassis to the CRG KT1 30mm frame seemed to better fit Wimsett’s on-track style, and the results showed. The defending SKUSA S1 Pro Stock Moto champion started the weekend searching for solid footing while logging valuable data for the KT1 frame.

Wimsett began the weekend among the top drivers during Friday practice, but went the wrong direction in set-up for round three qualifying, ending up 13th. A great start put him into the top-10 until he was pushed off-course. He fought back to finish 14th and was back into the top-10 in the main event until a brake issue forced him out of the race. After pouring over the kart with long-time CRG tuner Franco Bologna, the team found some more hidden speed in Wimsett’s ride for the second day of racing. Showing that extra pace off in qualifying, Wimsett put his CRG fourth on the grid for the Prefinal. Contact in the opening corners of the heat race dropped the former US DD2 champion down to the tail of the field. Wimsett proved why he is one of the best in the country, gaining 10 positions in order to finish the race 11th. After more rough racing, Joey dropped back early on in the Final, but fought back with fast laps in racing conditions to finish sixth – his best result in the four COTA races held thus far.

Mexican driver Esteban Jimenez partnered up with CRG-USA once again, after he teamed with the squad in Tucson. The Micro Max driver continues to learn with each and every session, making big progress since last month’s race. Arizona driver James Weaver joined CRG-USA for the first time this year in the Masters Max category, posting a pair of top-10 finishes in his first weekend with the team. 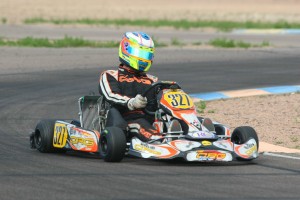 Immediately following the event, the team made a 10-hour trip back to the Grand Junction, Colorado shop in order to make a quick equipment switch from Rotax to Stock Moto, as the CRG USA trailer is now traveling to Lockhart, Texas for the third annual Lone Star Grand Prix. Cook recorded a fourth place in the Stock Moto Light category last year, and the team has over 20 drivers scheduled to be under their tent for coming weekend (March 1-2).