Versteeg Earns Second Win at Rotax Challenge of the Americas 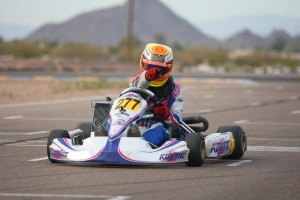 Versteeg has two wins in two weekends for the Rotax Challenge of the Americas (Photo: SeanBuur.com)

The opening two months have established a pattern for rising karting star Austin Versteeg. January brought on a podium finish at the Florida Winter Tour, followed by a victory at the Rotax Challenge of the Americas. February duplicated the feat, as Versteeg drove to a runner-up finish in Ocala, Florida and a second series win in Glendale, Arizona – finishing off strong back-to-back weekends. This early momentum could translate into big things for the Rolison Performance Group driver, including a possible ticket to the Rotax Grand Finals, and more success as the season wears on.

Much like he did at the opening weekend of the Rotax Challenge of the Americas, Versteeg was fast out of the trailer and among the contenders through Friday practice. Austin began round three action on Saturday posting the quickest lap in the qualifying session. His 46.600-second lap was more than three tenths clear of the field for the pole position going into the Prefinal. The pace translated into a flag-to-flag win in the 17-lap heat race, as consistent laps aboard his RPG Kosmic put him 3.5 seconds ahead of second place. Out front early, Versteeg was untouchable in the 25-lap Final. Leading every circuit, Austin posted the quickest laps of the race in the final few laps to pull away to a six-second victory.

“Today was important for us, and victory is what we hoped to achieve,” stated Austin Versteeg following the race. “We entered trailing in the point chase by one point, so earning maximum points like we did today will help earn our way toward reaching the series championship. I can’t thank enough Mike Rolison, my engineer Brian Fletcher, and everyone under the RPG tent for making the kart perfect all day. We had the quickest machine and it showed.”

Round four on Sunday saw Versteeg entering the day with the target on his back, with the entire Junior Max field looking to beat him on-track. Austin put in six laps during the 15-minute qualifying session, and was off from his pace the previous day, placing fourth overall to start the Prefinal from outside row two. Through the opening corners, Versteeg was into the second spot, directly on the bumper of the polesitter. After just a few laps, Austin took over the lead and began to run away to the win. It was a two-second advantage when the checkered flag waved for Versteeg, recording the fast laps of the race. The opening laps of the feature race were paced by the RPG Kosmic driver, this time however, hounded by three drivers for the win. On lap 17, one driver passed for position, and Versteeg fought back with an inside move of his own, and the two locked up. That sent both off course, and Versteeg rejoined the race in the seventh position. He gained two more spots in the closing laps to record a top-five finish.

“We were following our game plan toward victory and thought it would be a repeat of Saturday,” stated Versteeg once back home after the weekend. “I thought we had a solid pace going, unfortunately we were not able to pull away from the field like we did in our last feature race. The contact was very disappointing, as it’s the second time I’ve been pushed off track by another competitor while racing for the win this year. The points race is down to just two of us, so we now know what we is needed to put us at the top of the podium with the championship trophy.” 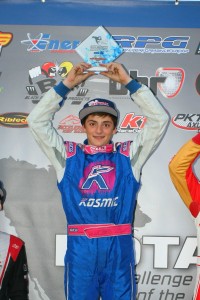 With two victories, Versteeg is in contention for the Junior Max title (Photo: SeanBuur.com)

Versteeg performed well against a strong international field at the Florida Winter Tour the previous weekend. Versteeg was ninth to open up round three qualifying, within two tenths of the pole position. The great start was taken away in the opening lap of the prefinal as he was shoved off course and fell to the tail of the 34-kart field. He managed to climb back to 24th at the checkered flag. Austin proved he had a ride that could compete for victory, as he piloted the RPG Kosmic to the fast laps of the race as he knifed his way forward to eighth at the checkered flag. The speed carried over to Sunday, holding strong in eighth place in the prefinal after qualifying in the same position. Once again, posting the fast laps of the race, Versteeg moved up to a podium result. One by one, he gained a position until reaching the second spot and began fighting for the victory. A race to the finish line put Austin just 55 thousandths short of the victory, bringing him his second podium of the series in four races.

“I’m excited for the final round of the Florida Winter Tour,” added Austin. “With two podiums in four rounds, I’d like to end the series with two more and put myself into the top-five of the championship chase. There is a chance to finish in the top-three, which would be a great end to what has been a very challenging few months in Florida.”

Versteeg will take a few weeks off as he prepares for the Florida Winter Tour and Rotax Challenge of the Americas finales. First is a return trip to central Florida and the OrlandoKartCenter on March 20-23, with a weekend off before traveling to the SonomaValley area at the SimracewayPerformanceKartingCenter on April 4-6. Visit www.austinversteeg.com for more information and to follow his path during the rest of the year.