Coming off a disappointing FWT, Lamberth was ready to once again, stand atop the blocks 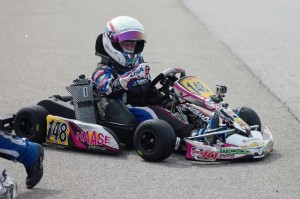 Traveling to the Ocala Gran Prix facility for the third and fourth rounds of the annual Formula Kart Productions Florida Winter Tour, Joseph Lamberth would have a lot of luck, it would just all be bad luck. Hoping to run at the front of the field on the national level, Lamberth was disappointed with his weekend finishes and was ready to head home. Taking no time off and looking to rebound, Lamberth would compete in the opening round of the CarolinaMotorsportsPark season and come away victorious, much as he did in 2013.

Showing speed in the practice, Lamberth would be involved in a multi-kart pile up in the second of three sessions as a fellow competitor would endure a stuck throttle and run up and over the top of young Joseph. With nobody hurt and the kart no worse for wear, Lamberth was primed and ready for his qualifying session.

Looking to show that his 2013 championship was no fluke, Lamberth laid it all on the line in qualifying and claimed the pole position by more than seven tenths (.745) over his closest rival. Happy with the performance of his Haase Bomber chassis, the same kart that he utilized at the Rotax Micro & Mini Invitational, the up and coming driver would look forward to his heat race.

Progressing through the prefinal with the win and accompanying pole position for the main event, Lamberth would anticipate the start of the main event.

The start of the main event was one of Lamberth’s best starts of his young career. Rocketing to the point, Lamberth began to open a gap in the opening complex of corners and draw away from his competitors. Driving like a season veteran, Lamberth set fast lap after fast lap in the fifteen lap main event. Opening a large gap on second place, the only concern the Haase driver had was that of lapped traffic. Catching two slower karts on the final few circuits, Lamberth made quick work of the duo and went on to claim the victory by 2.232 seconds ahead of his closest competitor. Celebrating with two arms in the air, Joseph was ecstatic to be back on the podium in the first event of the CarolinaMotorsportsPark season.

Joseph Lamberth will travel south back to Florida this coming weekend to the same Ocala Gran Prix facility that gave him so much trouble a few weeks ago. Looking to turn his results around at the facility, Lamberth will see action in the North Florida Rotax Max Challenge program as he looks to battle with some of the top drivers in Florida.

2014 will see Joseph Lamberth partner with a new supporter in TK Wrap Designs. Based out of Mooresville, North Carolina, TK Wrap Designs will show their support to the up-and-coming karter in the form of sponsorship throughout the season. Powerade and K1 RaceGear through CarolinaMotorsportsPark as well as his friends, family, school, teachers and the SouthviewBaptistChurch in Statesville, North Carolina, also support Lamberth.