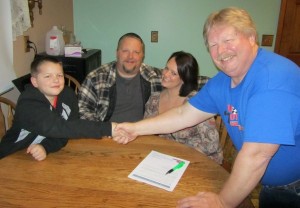 Eli Fox, 10, rounds out the stable of drivers for Jim Howe Motorsports after signing with the Columbus, Indiana-based team to drive its Junior Sportsman #62 Birel entry in 2014.

Fox is the eldest son of Jamie and Morgan Fox of New Ross (IN). The youth is a fifth grader at Ladoga (IN) Elementary School, excelling in gym and math. Besides racing, his hobbies include swimming, fishing, wresting for the South Montgomery Wrestling Club, and riding bicycles.

Racing since 2008 for his dad’s team, Fox already owns more than 40 victories in Junior Sportsman and Kid Kart competition with the Southern Indiana Racing Association (SIRA) – including five wins in the prestigious Goodland (IN) Grand Prix – and Whiteland (IN) RacewayPark. He also owns one SIRA Junior Sportsman championship (2012) and was the club’s Junior Driver of the Year in 2010 and 2012. He made his debut on the WKA Manufacturer’s Cup circuit in 2013 while also running selected races on the dirt at Ben Hur Speedway (Crawfordsville, IN) with Brown Motorsports.

“Jim’s got a really good race team,” the younger Fox said, “and he is a good friend of mine. I’m really looking forward to running for him this season.” Dad Jamie – himself a 25-year veteran of racing with two SIRA championships and more than 100 karting victories – is also excited for his son: “Eli’s always driven for me but I’m very excited to have him drive for a real racing team, rather than just for his father. It will be great experience for my boy.”

“We tried to get Eli last year,” team owner Jim Howe says, “but couldn’t make it happen. So, when this opportunity came up, we made sure we could sign the deal. He has tremendous skills and we will concentrate on helping him develop his talents to their fullest. I also know he will perfectly compliment my new Junior Supercan driver, Bransten Peavler.”

Fox and “Mo,” a 2011 Birel AR28Y, will be powered by Yamaha engines from BBS Race Engine Development of Middletown, IN. Current sponsors include Max Powder Coating of Scottsburg, IN, with additional programs currently under negotiation.

Fox will run the full 2014 SIRA schedule for JHM as well as selected races in the Tony Stewart Racing Series at the historic Whiteland (IN) RacewayPark road course with other races to be announced.

Jim Howe Motorsports was founded in 2000 and has included a number of Junior Sportsman entries through the years, including Daniel Pearcy (Shelbyville, KY) in 2009-2010 and Emma Gaich (Indianapolis) in 2013. The team’s mission is to bring kids with little or no experience into motorsports and prepare them for advancement in the sport. Jim Howe, 54, is a 35-year-plus veteran of racing. Before his karting days, he served as a mechanic on dirt late models with additional stints performing timing/scoring and management duties at various dirt and pavement tracks in Indiana; acting as news editor at National Speed Sport News under the late Chris Economaki; and serving as PR Director for the American Speed Association (ASA).