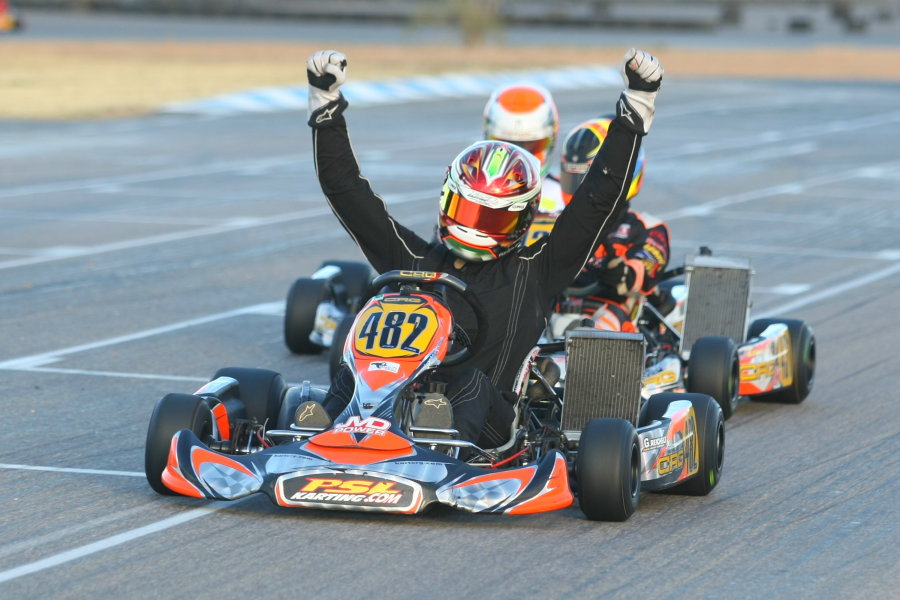 Reichelt scored his first DD2 win in the opening round of the Challenge, backing it up the following day (Photo: SeanBuur.com)

The United States DD2 program is certainly making progress year after year. Numbers around the country are growing little by little, but it’s the results at the international level that shows the talent coming up through the US Rotax Max Challenge program. Last year’s US champ is coming up through the Rotax program, earning his fourth different title beginning at Mini Max. A new driver looking to make his mark in the DD2 category is Gavin Reichelt. Entering his Senior season while making the transition to the two-speed Rotax power, the PSL Karting pilot stamped his debut at the Rotax Challenge of the Americas with two feature victories.

The series opener was held at the Musselman Honda Circuit in Tucson, Arizona, and Reichelt started the event off on top. Gavin posted the quick time in qualifying to open round one with the prefinal pole position. Leading early, it was a three driver fight that included fellow DD2 rookie Christian Schureman and top female pilot Sabré Cook. Reichelt would end up placing second, giving him the outside line for the start of the feature. The battle continued in the main event, with each taking a turn at the point until three laps to go with Reichelt back into the lead. He would hold off both drivers through the final laps to secure his first feature victory.

It was more of the same on Sunday, as the top three posted their fast laps within three hundredths of a second in qualifying, with Reichelt third in the order. The trio were swapping the lead once again in the prefinal, including a move from third to first by Gavin at one point in the race. When the checkered flag fell, he ended up second in the order. Another three driver fight formed in the main event, this time including Schureman and DD2 first timer Andy Lee. Reichelt and Schureman exchanged the lead a few times before Gavin secured the position. He held off one final charge from Schureman in the final laps, earning the second victory of the weekend.

This past weekend, Reichelt added a third straight victory at the second stop of the Rotax Challenge of the Americas, held at the PKRA facility in Glendale, Arizona. The New York driver leads the standings going into the season finale on April 4-6 at the SimracewayPerformanceKartingCenter in Sonoma, California. Up for grabs will be a ticket to the 2014 Rotax Grand Finals for the DD2 series champion, previously won the last two seasons by Fritz Leesmann. The 15-year old plans on continuing to race in the Northeast Rotax Max Challenge this summer, while also moving his attention into car racing – both open wheel and sportscar. 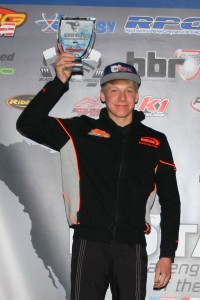 Chassis: CRG
Engine Service Center: JVD
Sponsors: PSL Karting, PSL Atlantic, JVD Engines, Hannen Motorsports, Ruge’s Automotive, and my supportive parents
United States Rotax Max Challenge Home Series: Northeast Rotax Max Challenge
Years Karting: 5
How did you get started in karting? I got started in karting when my dad took me to Oakland Valley Race Park and asked me if I wanted to sit in a kart…I said yes and the rest is history
What has been the high point in your racing career? I’ve had some great wins in my racing career, but I believe that my highest points are yet to come.
What are your goals in racing? My goal in racing is to drive for a professional race car team
In a few words, how would you describe your driving style? Unique and adaptive. I’m always trying to improve myself

What do you do when not at the track? I’m doing school work and anything active to keep myself in shape
What are your goals outside of karting? They include driving race cars and eventually earning a college degree
What type of street car would you like to drive? Subaru WRX STi
What are your pet peeves or things that irritate you? Bad hair days, and rude people
What is your favorite aspect about racing in the Rotax Max Challenge program? Being able to push myself to succeed among the best drivers in the world