‘Jetpak’ Jak Crawford Doubles Up at Rotax Challenge of the Americas 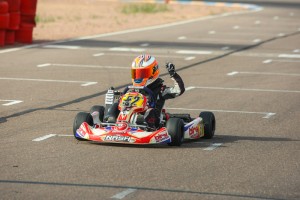 “Jetpak” Jak Crawford scores another pair of victories at the Rotax Challenge of the Americas (Photo: Sean Buur)

‘Jetpak’ Jak Crawford, the Nash Motorsportz Rotax Micro Max driver, posted another two race weekend sweep at the PKRA facility in Phoenix, Arizona this past weekend at rounds three and four of the annual Rotax Challenge of the Americas. Taking place at the challenging venue, the talented eight-year-old utilized his natural skills in his first time at the track to add to his 2014 resume and increase his lead in the series point standings.

Showing his true speed at the first event in Tucson, Crawford continued his momentum in Phoenix, as he was once again the driver to beat. Now claiming four feature event victories in the past month, Crawford’s success is astonishing since he first sat behind the wheel of a Rotax powered Birel only five months ago.

Starting his weekend off with testing on Friday, Jetpak showed why he is the main contender in the title chase by never placing times outside the top-two. To the track on Saturday for qualifying and the first wheel-to-wheel action of the weekend, Crawford would begin his weekend with adversity as he suffered engine trouble in the morning timed session. Suffering a significant loss in RPMs, speed and lap times, Jetpak would need to live up to his nickname after qualifying deep in the twenty-one kart field.

With an engine change before the prefinal, Jak would start from the tail of the field and begin his march forward. Utilizing the speed of his Rotax powered Birel, Crawford would end the heat race with a fourth place effort and start the main event from outside row two. In the main event, it only took Jetpak two laps to work his way to the point at which he never looked back. Leading lap after lap and drawing away from his competition, Crawford was never under attack from his competitors and managed to secure his third main event victory of the season by more than three seconds.

As was the case in Tucson a month prior, the entire Rotax Challenge of the Americas weekend would prove to belong to Jetpak Jak. Winning the pole position on Sunday, and putting his qualifying problems the day before behind him, the Nash Motorsportz driver would go on to win the prefinal event with only a little drama. He relinquished the lead only once in the prefinal as a two-kart freight train in a fast draft caught and passed him at the end of the straight. Within two laps of the impossible to stop two-kart duo, Crawford was back in the lead due to some heroic passing and took control of the prefinal win.

In the main event Crawford would never give up his lead but adversity would rise again. During the main he had lost the handling on his kart as Saturday’s high-grip track condition deteriorated by the end of the day on Sunday. For the entire 14-lap event, Jak worked hard with a severe understeer issue to hold off the charging competitors behind him. In the end his crafty endurance, over his year’s mindfulness and skillful driving would prove to be the winning formula by over half a second.

Jak Crawford would like to thank the following people for his successful West Coast Rotax racing debut over the past month. A special thank you to Seth Nash as tuning consultant, Chris Freckleton as engine builder/consultant and his mechanic Tyler Grant, all part of the Los Angeles based Nash Motorsportz team. Jak also wishes to thank 3G Racing/Team Burger King in Katy, Texas for their equipment, encouragement, and consultation. Crawford is coached by Garret Boone, the 3G Racing/Team Burger King Birel shifter-kart driver from Houston. Jak would also like to make a shout out to his friend and Cadet racing inspiration in Florida Harry Coulton, the best young kart driver on the planet.

Jak Crawford will race in nearly 50 national and regional karting races in 2014. His main 2014 goal is to win the Rotax Grand Nationals in his Rookie attempt. Jak’s next event following the release of this press information will be in the MinicRok format at the Lonestar Grand Prix in Lockhart, Texas on March 2nd. For more information on “Jetpak” Jak, or to place sponsorship or calendar inquiries, please contact Nikki Crawford at nikocraw@gmail.com. 2015 chassis partnership opportunities are currently under consideration.