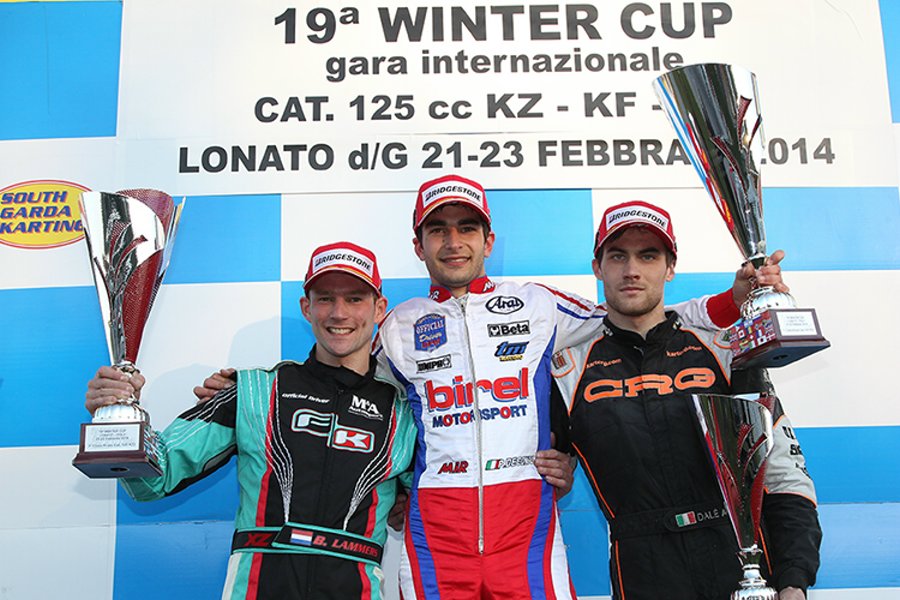 Three nice finals concluded a very tight 19th edition of the Winter Cup. De Conto clinched the victory leadingLammers and Dalè in KZ2, Lorandi proceeded Tiene and Hiltebrand at the flag of KF, while Enaan won KF Junior from Fewtrell to Travisanutto.

A sun shone on the 19th Winter Cup of Lonato creating the perfect conditions for the finalists to give their best at the South Garda Karting, after a difficult eve mainly due to the changing weather conditions.

In the presence of 208 drivers virtually from all over the world, this first and most awaited international event witnessed the victory of the Italian Paolo De Conto (Birel-TM-Bridgestone) racingwith the Birel’s works team in KZ2, that of Alessio Lorandi (Tony Kart-TM-Bridgestone) in force at Baby Race in KF, while the Briton Ahmed Enaam (FA-Vortex-Vega) of team Ricky Flynn won the KF Junior. 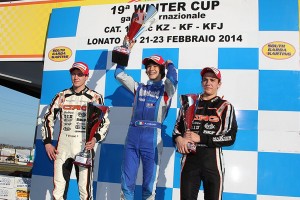 DE CONTO FROM LAMMERS TO DALE’ IN KZ2:
The driver from Brescia Andrea Dalè (CRG-Maxter) came to the fore in KZ2’s qualifying as well as in the heats and Prefinal, but a bad start in the Final compromised since the beginning his final result. De Conto got the lead of the race and managed to keep it for the whole 25 laps of the race, fending off the attacks of the Dutch driver Bas Lammers (Formula K-TM), while Dalè ended on the podium in third after a comeback race. The other top positions went to the British driver Ben Hanley (Art GP-TM), Flavio Camponeschi (Tony Kart-Vortex), Mirko Torsellini (Art GP-TM), Arnaud Kozlinski (Intrepid-TM) and Jordon Lennox-Lamb (CRG-Maxter). The favourite drivers of the eve, Marco Ardigò (Tony Kart-Vortex) and Davide Forè (CRG-TM) were delayed by a technical problem in Prefinal the first, and by a contact in the Final the second. Forè ended his effort in 10th place, while Ardigò was 13th.

ALESSIO LORANDI’S GREAT DEBUT IN KF:
Category KF has been particularly battled with Felice Tiene (CRG-TM) setting the pace in qualifying heats and the Dane Niklas Nielsen (Kosmic-Voretex) leading the pack in the Prefinal. The final victory went to the Italian Alessio Lorandi (Tony Kart-TM) though, as he pulled a victorious comeback race at the debut in KF after winning the last year’s KF Junior World Championship. The second position went to Felice Tiene, who also put in a good recover in the Prefinal, as did his team mate at CRG, the Spaniard Pedro Hiltbrand, who was third  on the podium after the 22nd place in the Prefinal.

Sitnikov (Art GP-TM), Van Leeuwen (Zanardi-Parilla) and Rossel (Tony Kart-TM) ended at the feet of the podium as the latter completed a good recovery race started from the back of the grid that allowed him to finish ahead of Basz (Tony Kart-Vortex) and Nielsen. 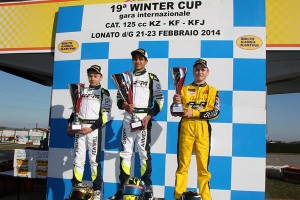 SURPRISING ENAAM IN KF JUNIOR:
The British driver Ahmed Enaam (FA-Vortex) confirmed to be very quick in KF3. He managed to get the lead in the Final after a very nice battle in the initial stages. The Briton kept his lead until the flag when he proceeded his team mate Max Fewtrell, while the third place went to the Italian Lorenzo Travisanutto (PCR-Parilla). Daniel Ticktum (Zanardi-Parilla) ended fourth after his solid pace in the heats, ahead of Tommaso Mosca (Tony Kart-TM), Giuliano Raucci (Energy-TM), Davide Lombardo (Tony Kart-Vortex) and Leonardo Lorandi (Tony Kart-TM) with the latter starting from the last spot of the Final’s grid.