There is no question the commitment and dedication the Rolison Performance Group gives each day to the many racers involved with their operation. Much of its success has come in events and series based in the western half of the United States. The last two months however at the Florida Winter Tour, the RPG name has been seen at the front of the field in a number of categories. This past weekend at the Ocala Gran Prix facility for the third and fourth rounds of the international Rotax Max Challenge, Rolison Performance Group helped to guide three drivers in separate classes to four podiums, including a victory by Brazilian Matheus Morgatto. In total, four drivers finished the weekend with eight top-10 results, a solid improvement from the opening weekend in Homestead last month.

Morgatto returned to Florida following up his first FWT podium in Homestead last month. The Brazilian, making only his third series start, spent the weekend at the head of the field, never finishing outside the top-three. Saturday’s round began with a possible sweep in the making, with Matheus qualifying first and finishing the prefinal as the winner. He led the majority of the 16-lap event until the fight for the victory commenced with two circuits remaining. After a hard fought battle, Morgatto crossed the line in the third position to match his previous podium finish. Matheus qualified second for round four competition taking place on Sunday. After getting shuffled back at the start of the prefinal, Morgatto fought his way back to the front and was able to make a last lap pass for the race win. The main event was near for Matheus as he led the entire 16-lap feature as the RPG driver claimed his first Florida Winter Tour victory. 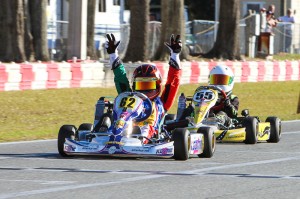 RPG’s Austin Versteeg has established himself among the top Junior drivers in the United States, and is performing well against a strong international field at the FWT. The top-10 in Saturday’s qualifying session was within two tenths of each other, as Versteeg was ninth on the board. The great start was taken away in the opening lap of the prefinal as he was shoved off course and fell to the tail of the 34-kart field. He managed to climb back to 24th at the checkered flag. Austin proved he had a ride that could compete for victory, as he piloted the RPG Kosmic to the fast laps of the race as he knifed his way forward. Into the top-10 by lap the halfway point, Versteeg ended up eighth in the final tally. The speed carried over to Sunday, holding strong in eighth place in the prefinal after qualifying in the position on Friday. Once again posting the fast laps of the race, Versteeg this time moved up to a podium result. One by one, he gained a position until reaching the second spot and began fighting for the win. A race to the finish line put Austin 55 thousandths short of the victory, bringing him his second podium of the series in four races.

RPG Mini Max driver Caio Callet was also making his third FWT start, looking to improve on a great start to the 2014 season as the Brazilian nearly scored his first victory and podium finish in Homestead. Callet was fourth in qualifying for round three action, improving to second in the prefinal. Staying within the lead group for the entire 16-lap feature race, Caio was unable to break into the lead, finishing with his first FWT podium in the third spot. A tough qualifying result for round four put Caio behind early, starting the prefinal in 13th. Gaining four spots in the heat race, the RPG Kosmic driver gained another four in the main event to earn a fifth place finish for his third straight, placing him in the championship chase heading into the series finale next month. 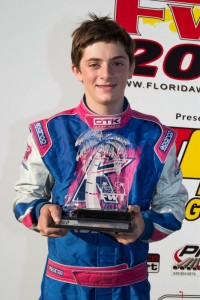 Progression continued for Masters Max driver DJ Ortiz as the veteran Rotax racer enjoyed his best weekend performance yet under the RPG tent. The Texan qualified eighth for Saturday’s round of racing, improving to sixth in the prefinal to set up a race-long battle for a top-five position in the main event. Ortiz settled for seventh, but gained the knowledge needed to take his race pace to the next level. Starting ninth in Sunday’s prefinal, DJ drove to seventh to once again put him in position for a strong feature finish. By lap five, Ortiz was into the top-five and put himself into the fourth position by the checkered flag for his best FWT finish of the season. Brazilian Joao Vieira rounded out the RPG squad in Ocala, racing the ultra-competitive Senior Max category. After two difficult qualifying efforts, Vieira fought his way up into the top-10 both days until being involved in contact. He drove to 15th on Saturday but was unable to continue in Sunday’s main event. The race pace is there, Vieira will now focus on producing strong qualifying results for the series finale next month.

RPG makes a quick turn-around as the staff travels to the Phoenix area for the second stop of the Rotax Challenge of the Americas program on February 21-23. The Phoenix Kart Racing Association facility in Glendale, Arizona will host rounds three and four with a solid roster of drivers set to compete under the RPG tent with the experienced and professional staff the operation provides at every race. Phillip Arscott leads the Senior Max championship standings following two runner-up finishes in Tucson. Senior rookies Luke Selliken, Blaine Rocha and McKay Snow will join Arscott once again. Junior Max drivers Austin Versteeg and Kyle Wick stood on the podium during the opening weekend, and return for more with Jeff Fulham and Dhyllan Skiba looking to improve their results. Justin Peck carries the RPG flag in Masters Max, coming off a top-five in round two. Connor Wick looks for progression in the Mini Max category, as does Micro Max drivers Josh Pierson and Tait Blum. 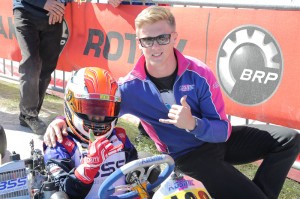 Rolison Performance Group is taking requests for Arrive-and-Drive programs or transportation opportunities at the final Florida Winter Tour and Rotax Challenge of the Americas events – along with early planning for the Superkarts! USA Pro Tour and Can-Am Karting Challenge. For more information on all the services that the Rolison Performance Group has to offer, visit www.rolisonperformancegroup.com or find them on Facebook.