One win and two podiums for the world's #1 CRG distributor 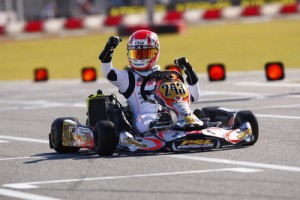 Pedro Cardoso scored a triumphant victory in Rotax Junior and holds the overall point lead in the class
(Photo: pslkarting.com)

After taking the opening rounds of the 2014 Formula Kart Productions Florida Winter Tour (FWT) by storm back in January, Team PSL Karting would be back on track for rounds three and four at the Ocala Gran Prix (OGP) in Ocala, Florida. Fielding a talented team of 11 drivers, Team PSL Karting would come out on top in the Rotax Junior category with ace Pedro Cardoso. With two additional podiums achieved at the tight and twisty 0.52 mile OGP facility, Team PSL Karting drivers will be fighting for more wins, podiums and overall championship titles at the series finale come March.

“Entering this weekend, the bar had been set high from all the other teams including us, as the FWT is the most competitive series in North America at the moment,” noted Dominic Labrecque, President of PSL Karting.

Leading the charge for PSL/CRG was Brazilian pilot Pedro Cardoso in the ultra-competitive Rotax Junior class. After earning two runner-up finishes at the Homestead rounds, the young gun would be thirsty for a victory. Tackling both qualifying sessions on Friday, Cardoso would come shy of the coveted pole position by the slimmest of margins. Clocking second quick for Saturday’s round a mere 0.012 seconds behind the first place qualifier, Cardoso would score third for Sunday’s action this time missing out by 0.081 seconds. Getting started with the wheel-to-wheel action, the Brazilian pilot would score the prefinal win with ease on his CRG X2 chassis and secure the pole position for Saturday’s final. Taking command at the start of the race, Cardoso eventually fell back to second but not out of the fight. Making a calculated move to regain the lead, Cardoso drove to the stripe to claim his first victory in the 2014 FWT. Sunday saw Cardoso again score the prefinal win, but would settle for seventh after some racy action in the final. With Team PSL Karting continuing to refine their Rotax Junior program, their efforts are clearly evident, as Cardoso will enter the final rounds the points lead in the class. 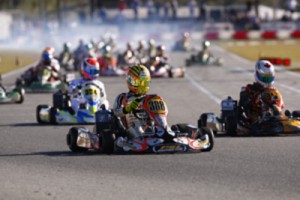 Factory CRG pilot Jordan Lennox posted a third place podium result on Sunday after an up and down weekend
(Photo: pslkarting.com)

More success would come for Team PSL Karting in the potent Rotax Senior category. Great Britain’s Jordan Lennox would start his efforts with two top-ten qualifying results, posting fifth for Saturday and seventh for Sunday. With a day to forget during Saturday’s competition, Lennox would be back for vengeance on Sunday. Powering his X2 chassis, specifically designed for Rotax/Mojo racing, up from his fourth row starting position, the Factory CRG pilot would make it to the point to score the prefinal victory. A questionable start in the final saw Lennox’s preferred inside row get passed by the outside line, ultimately leading to a third place podium finish for the talent. With just two rounds remaining, Lennox sits fifth in the overall Rotax Senior standings.

“The beginning of the week was a bit challenging, especially competing against the home track heroes in Ocala,” added Andrew Campbell, PSL Karting’s Team Manager. “However, we proved to be quicker than all of them claiming good qualifying results in almost every category. In particular, the Senior Max finish may have been different if it was not for a questionable start in Sunday’s main.”

Fellow Factory CRG pilot Danny Formal would add a podium result for Team PSL Karting. Running 18 pounds overweight in the Rotax DD2 class, the four-time US Rotax Grand National Champion would start his Ocala effort with fifth and second in the two qualifying sessions on Friday. Posting fourths in both the prefinal and final on Saturday, Formal would then up the ante on Sunday. Starting from the front row in the prefinal, the American driver fell back to third in the prefinal and then matched that in the final to score the final step on the podium. Added to his win from Homestead, Formal leads the championship standings heading into the Orlando finale rounds. 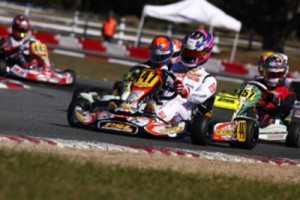 In the two Masters classes, Costa Rica’s Andres Fonseca claimed two fifth place results to enter the final rounds fourth in the overall DD2 Masters ranks, while Canadian David Shutiak would endure a scary accident during Sunday’s Rotax Masters final. The entire Team PSL Karting would like to wish David a speedy recovery after sustaining injuries in the crash.

“I’m exceptionally proud of this team, our staff and all our partners involved,” concluded Campbell. “Many do not see the work behind the scenes from PSL and CRG, including the logistics/planning, product development, and the stress management that comes along with it. Again, the CRG Blackstar X2, a chassis designed for Mojo tire in Senior Max, was amongst the quickest against drivers who spend hundreds of laps per week at Ocala; putting more confidence in our R&D department. We’re definitely looking forward to Orlando where we will be looking to claim a few more P1s.”