Michael d'Orlando victorious on both Formula Kart and Rotax weekends 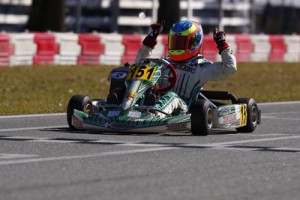 Descending on the Ocala Gran Prix facility in Ocala, Florida, Team Koene USA was once again seen on the top step of the podium. While all team drivers performed well, Michael d’Orlando would add three victories to his resume taking home both main events in Vortex TaG Cadet as well as a breakthrough win in Rotax Mini Max.

Taking to the track during the Formula Kart weekend, Team Koene USA would enter four drivers as Jarrett Voorhies and Roman DeAngelis would run in TaG Junior while brothers Michael and Nicholas d’Orlando would try their hands in TaG Cadet.

“Though the Ocala Gran Prix facility is short, it is a lot tougher than it looks,” explained Team Koene USA Team Principle Mike Maurini. “There are a pair of corners that need to be driven properly and any over or under driving will be reflected in lap times.”

Both DeAngelis and Voorhies would find their way to the top-ten by the time the final checkered flag flew on Sunday with DeAngelis crossing the line in ninth and Voorhies in tenth. Gaining experience with each passing lap, both drivers improved throughout the weekend. Back to the track on Sunday, Voorhies would cross the line in 12th while DeAngelis would be involved in an incident mid-race and finish 15th. Both competitors will look to better their results at the final Formula Kart weekend in the series in mid-March at the Orlando Kart Center.

The d’Orlando duo would be the consistent pair on the weekend, as Michael would score a pair of victories in the main events while brother Nicholas would battle to two seventh place results. Though the weather would play a factor on Saturday as rain would dampen the day, both drivers pressed on and currently sit first and second in the overall series point standings.

Younger brother Nicholas would have a trying weekend. Showing the speed to run inside the top-ten, Nicholas would be involved in incidents in the main events that hindered his shot at good results. Closing the weekend with 20th and 33rd place finishes, Nicholas will look to regain his momentum in Orlando. 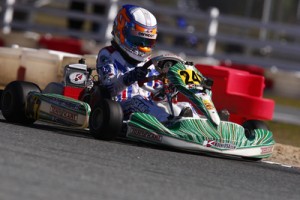 Roman DeAngelis would enter his second Rotax Junior race of the year and would struggle with the tricky Ocala Gran Prix facility. Working hard throughout the weekend, DeAngelis would transfer through the last chance qualifiers to have the chance to compete in the main events. Continuing to learn and develop his skills, the young Canadian would end the weekend with a pair of top twenty-five results.

Maurini added, “We will now head to the final rounds of the Florida Winter Tour in Orlando. With fierce competition and the shot at a few championships, we will work hard to continue the success and stand atop the podium.”